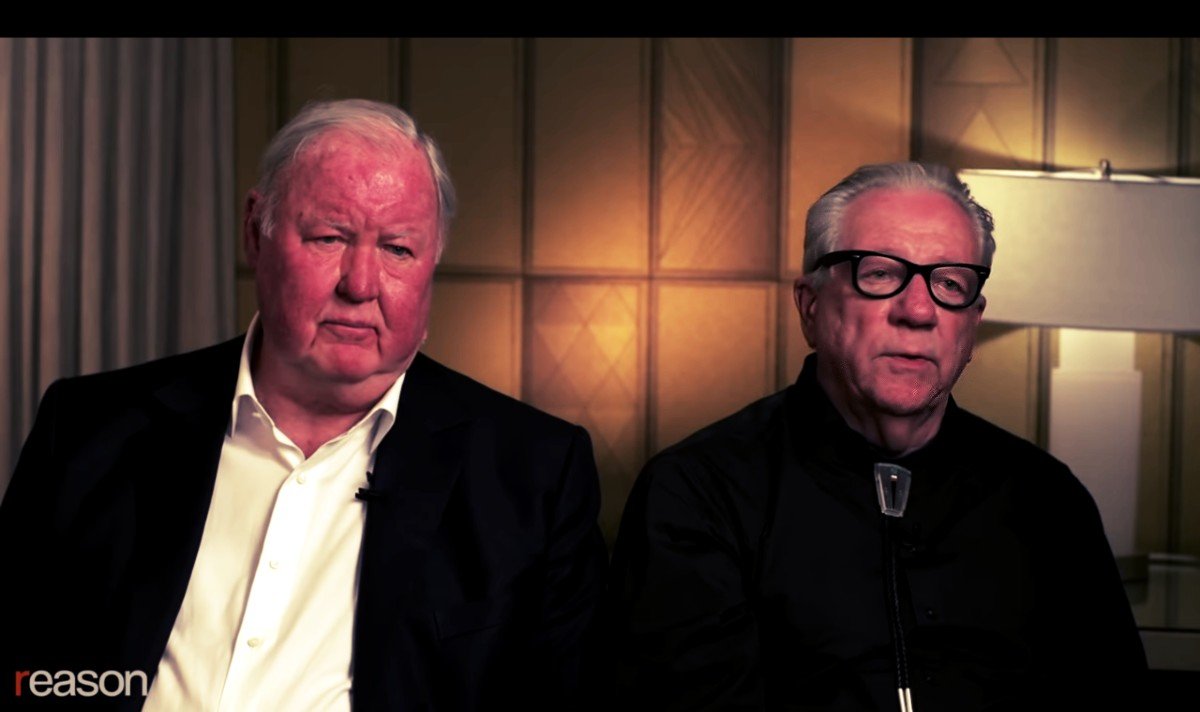 Jim Larkin (left) and Michael Lacey, from the Reason documentary, "The War on Backpage.com Is a War on Sex Workers." (Screenshot via Reason.com)

A new documentary by the libertarian magazine Reason details the government's scapegoating of veteran newspapermen Jim Larkin and Michael Lacey.

With GPS monitors on their ankles, their assets frozen, and the federal government aiming to put them in prison for the rest of their lives, Backpage’s co-founders, veteran newspapermen Michael Lacey and Jim Larkin, remain as defiant as ever in a new YouTube documentary by Reason magazine, “The War on Backpage.com Is a War on Sex Workers.”

The 40-minute film by Reason video producer Paul Detrick tells the story of Lacey and Larkin’s First Amendment fight with the feds over the adult ads that once appeared in the now-defunct online listings Goliath, Backpage.com. The men co-founded the site in 2004 as a way to recoup some of the money their alt-newspaper chain lost due to the rise of the classified advertising juggernaut, Craigslist.org.

In 2010, bowing to the demands of self-righteous politicians, Craigslist shuttered its adult section, which featured perfectly legal ads for escorts, massages, strippers, and the like. But being scions of the rebellious ’60s and the practitioners of their own pugnacious, antiauthoritarian brand of journalism, Lacey and Larkin refused to bend the knee as the pressure mounted for Backpage to follow Craigslist’s subservient tack.

Lacey and Larkin sold their interest in Backpage to company CEO Carl Ferrer in 2015, but the pair continued to catch hell for their rebelliousness, leading to FBI raids on their properties and their arrests and indictment in April 2018 on 100 counts related to money laundering, conspiracy and the promotion of prostitution across state lines.

That same day, the feds also seized Backpage and flipped Ferrer, who pleaded guilty to conspiracy and money laundering in exchange for his cooperation and willingness to testify against his former partners.

Out on bonds of $1 million each, Lacey and Larkin in the film proclaim their innocence and their rights under the First Amendment to be free from government harassment.

“We don’t kowtow,” Larkin says at one point.

Sitting next to him, Lacey concurs.

“It would give the lie to our entire lives, our entire careers of being journalists if the government could come in and put their stubby little fingers in our chests and make us ask for our mommy,” Lacey says. “It ain’t gonna happen.”

The documentary draws heavily on the work of Reason associate editor Elizabeth Nolan Brown, the nation’s premier reporter when it comes to the moral panic of “sex trafficking” — a term that is defined by federal law as involving either children in the sex trade, or adults through force, fraud or coercion. Regardless, the government regularly conflates sex trafficking with consensual commercial sex among adults, aka, prostitution.

Brown appears in the documentary, as does sex worker/journalist Siouxsie Q and Dr. Lois Lee, founder and president of Children of the Night, a non-profit that combats the sexual exploitation of children by taking the fight to the streets. Lee talks of her organization’s work rescuing runaway teens and the financial assistance Lacey and Larkin have provided to the group to the tune of about $1 million since 2012.

Lee points out that Backpage was actually a tool used by law enforcement to rescue trafficked women and children and to put traffickers behind bars, and Backpage employees actually trained cops on what to spot. She, Brown and Siouxsie Q all testify to the fact that sex work has become more dangerous since Backpage was taken down.

“It’s a charade, it’s an absolute charade,” Lee states at one point of the case against Lacey and Larkin. “You can vilify these guys for all the sins in the world, and that’s what’s happening. It’s not right.”

The documentary also takes aim at several of Lacey and Larkin’s detractors, such as John and Cindy McCain, Ashton Kutcher, and U.S. Senator and presidential contender Kamala Harris, who twice brought pimping charges against Lacey and Larkin when she was California’s AG, only to have them tossed by a judge.

In a February interview with The Root, Harris defended her prosecution of Backpage’s former owners, saying they were different than Craigslist, because they, “basically thumbed their nose at us.” As a result, she “called for them to be shut down.”

To that admission of selective prosecution, Lacey had the following retort:

“Craigslist kissed their ass. That’s their definition of the right thing. That’s what [Harris] means when she said we thumbed our nose at them.”

“We don’t think it’s the government’s job to be telling us what to print.”

Read more about the Backpage case by Elizabeth Nolan Brown in this exclusive August 2018 piece:
The Senate Accused Them of Selling Kids for Sex. The FBI Raided Their Homes. Backpage.com’s Founders Speak for the First Time.

And, ICYMI, read this recent piece by WIRED on Lacey and Larkin:
WIRED Magazine Warns Silicon Valley: Backpage Founders’ First Amendment Fight Is Yours Too