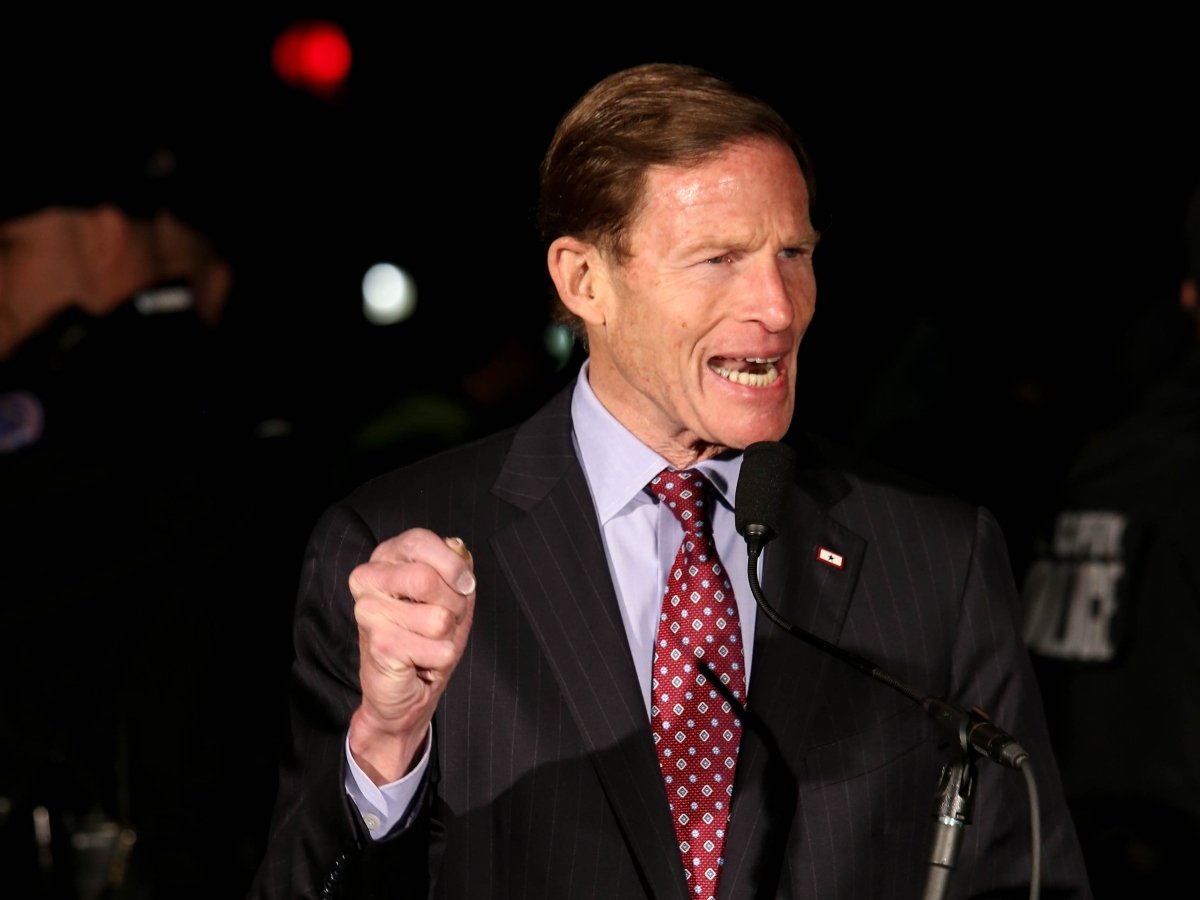 Blumenthal was among several honorees at a black-tie banquet held at the Marriott Marquis in Washington, DC as part of the foundation’s 30th Annual First Amendment Awards. RTDNF chair Jerry Walsh, an executive in charge of local content development with Nexstar Media Group, LLC, presented a plaque to Blumenthal, saying that the two-term Democratic Senator had “championed the rights of journalists to deliver the truth and inform the public.”

In accepting the award, the Connecticut pol waxed nostalgic about working as a summer intern at the Washington Post while he was a student at Harvard University. He also talked up his proposed legislation, the Journalist Protection Act, which would allow federal prosecutors to go after assaults on members of the press, although local laws against assault already cover journalists, just as they do everyone else.

What neither Blumenthal nor Walsh mentioned was that earlier that same day Blumenthal and a handful of other lawmakers, formally introduced the Eliminating Abusive and Rampant Neglect of Interactive Technologies Act (EARN IT Act), which has been widely condemned by electronic privacy and civil liberties experts as an attempt to undermine encryption and further limit free speech on the internet.

The EARN IT bill doesn't have the word "encryption" in it—but it will give @TheJusticeDept the opportunity to ban encryption. https://t.co/9K4BTdFKRb

As Santa Clara University School of Law Professor Eric Goldman explained in a recent post to his influential Technology and Marketing Law Blog, the EARN IT Act proposes to protect the public from dangerous content by creating a de facto internet “censorship board,” dominated by the U.S. Attorney General and others in law enforcement. This censorship commission would develop a set of “best practices,” to which websites would have to adhere, or risk losing part of their immunity for content posted by users under Section 230 of the 1996 Communications Decency Act .

In the name of battling “child sexual abuse material” (aka, child pornography),  the EARN IT Act’s censorship board could impose a smorgasbord of rules on internet services and websites, including a backdoor to encryption, mandatory age authentication and the banning of posts deemed sexually suggestive.

The #EarnItAct jeopardizes the data security of every single American by providing so-called "backdoors" to our encrypted communications. We're proud to stand with @ACLU in opposition to this dangerous bill. https://t.co/goMTaTeMEX

Not only could the EARN IT Act’s heavy-handed regulation of the internet clamp down on free expression, it could directly impact journalists, who often rely on encrypted communications from sources to report on stories. Groups as ideologically diverse as the ACLU, Americans for Prosperity and the Electronic Frontier Foundation have blasted the bill as a dangerous power-grab by the federal government.

Given this, how does the Radio Television Digital News Foundation justify presenting Blumenthal with a First Amendment award in spite of his authoritarian scheme to roll back internet freedoms?

Dan Shelley, executive director of the RTDNF and its sister organization, the Radio Television Digital News Association (RTDNA), told Front Page Confidential via email that the RTDNF’s 25-member board of trustees “voted unanimously last fall for Sen. Blumenthal to receive this year’s award,” a decision that he said was based upon Blumenthal’s “long record of advocating for a free press, including, but not limited to, his introduction for, and longstanding support of, the Journalist Protection Act.”

Shelley added that the EARN IT Act “was not discussed or otherwise considered, as neither RTDNF nor or its parent organization, the Radio Television Digital News Association, has taken a position on the proposed legislation.”

One of the sponsors of the RTDNF awards ceremony was Nexstar Media Group, which bills itself online as “America’s largest local television and media company with 197 full power stations (including partner stations) in 115 markets addressing nearly 63% of US television households and a growing digital media operation.”

Last year, Blumenthal and other legislators intervened in a contractual dispute between Nexstar and  AT&T that for several weeks kicked Nexstar stations off AT&T-owned platforms, such as DirecTV and AT&T U-verse.

Executive Director @MurrowNYC
on why, for three decades, RTDNF has gathered each spring to honor #FirstAmendment champions: https://t.co/VWB6Te3P2h

In a July 5, 2019 letter to AT&T and Nexstar execs — one touted in a Nexstar press release — Blumenthal bemoaned the effect of the dispute on “customers in the Hartford-New Haven market.” And he encouraged both sides to “negotiate in good faith” and “immediately provide carriage” of two Connecticut stations that had been impacted.

By the end of August, AT&T and Nexstar had buried their technological hatchets, according to USA Today, signing “a new multiyear deal,” allowing 120 Nexstar stations back on AT&T platforms.

Senator Richard Blumenthal was given the First Amendment Defender Award for taking a public stand in support of press freedom tonight in Washington D.C. pic.twitter.com/6RUqCXB5KZ

Shelley said Blumenthal’s effort last year to bring the contractual contretemps to a close had not been a factor in the RTDNF award.

“As a participant in the conversations leading up to that decision, I know first-hand that there was no discussion among our Board of Trustees regarding the senator’s letter last year both to AT&T and Nexstar in which he urged them to resolve business issues that were preventing DirecTV customers in Connecticut from viewing Nexstar stations,” Shelley explained in an email to Front Page Confidential.

Shelley quoted a relevant part of Blumenthal’s letter from last year, where the Senator stated that he was taking “no definitive position supporting either side” in the squabble.

“Senator Blumenthal was honored to receive the First Amendment Defender Award for his work on press freedom. He’s also proud to stand up on behalf of Connecticut consumers who were being denied coverage and access to local programming that they paid for. The two are not related. Have you had a chance to read the letter Senator Blumenthal sent to AT&T and Nexstar? He specifically noted that he was not taking a definitive position supporting either side in the dispute.”

As a follow-up, FPC asked McElwain why was the bill dropped March 5? After all, a draft of the bill had been circulating for at least a month.

McElwain has yet to respond.

A spokesman for Nexstar referred all questions to the RTDNF.

Thing is, Blumenthal’s EARN It Act is hardly a one-off, and the senator seems an odd choice for a First Amendment plaudit considering his hostility toward free speech online and off.

He’s been no great friend of the Fourth Estate either.

Considering Blumenthal’s track record on free speech and the press, dubbing him a “First Amendment Defender,” seems inaccurate, at the very least.

Still, it’s not as bad as Blumenthal’s own flubs from a few years back, when he incorrectly told audiences that he had “served in Vietnam.”

Actually, according to the New York Times, Blumenthal received five deferments before scoring a plum assignment in a DC-based Marine Reserve unit, which “focused on local projects, like fixing a campground and organizing a Toys for Tots drive.”

But that kind of genteel public service doesn’t make Blumenthal a war veteran, any more than his attempts to rein in online speech and undermine encryption make him a First Amendment “defender.”

And ICYMI, please see:
The Guns of August: Judge Resets Start Date of Lacey/Larkin Trial
and
Remembering Marcia Powell with the Help of PJ Starr’s No Human Involved