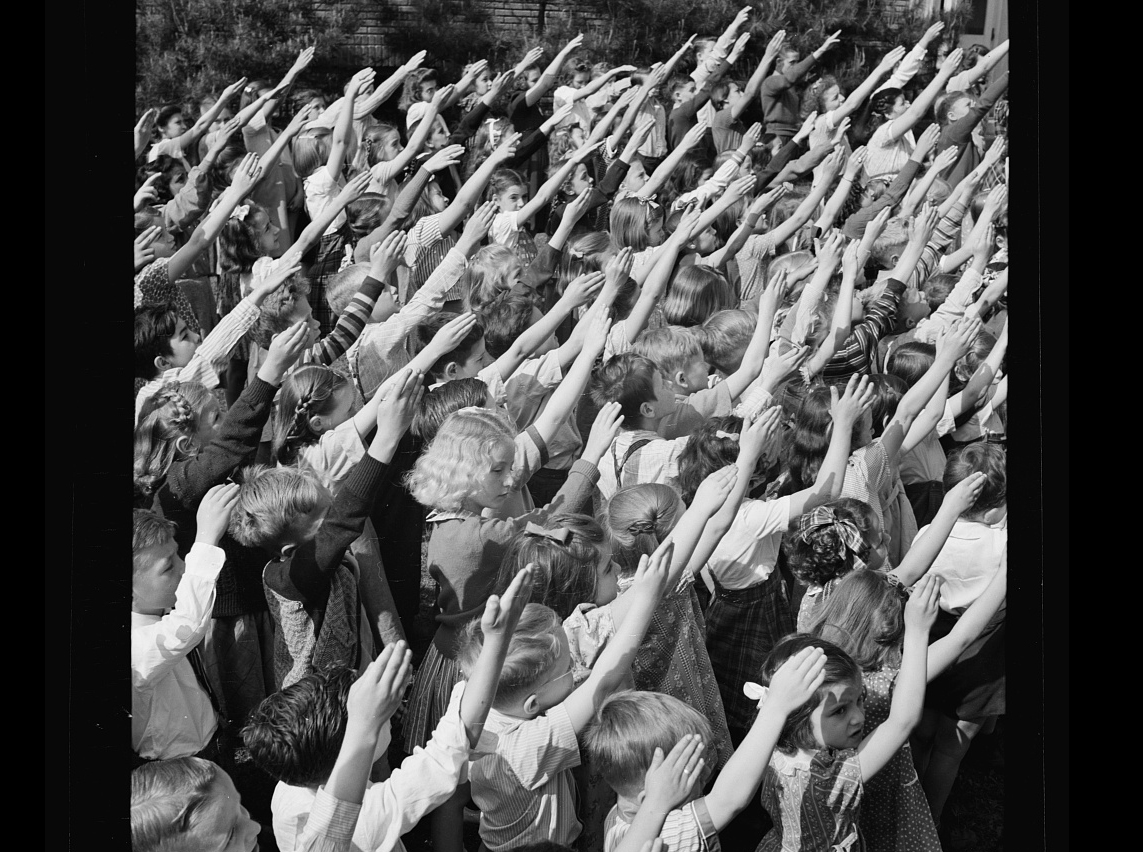 A 1942 photo from Southington, Connecticut, depicting the Bellamy salute. Francis Bellamy prescribed its use to accompany recital of the Pledge of Allegiance, which he authored in 1892. (Fenno Jacobs via Library of Congress)

President Donald Trump’s animus for professional athletes who silently protest police brutality during the national anthem has inspired public-school officials in Louisiana to threaten punishment for any student athletes who dare to emulate NFL knee-takers.

This latest flap in the roiling controversy over Trump’s call to fire rogue NFL players began on Wednesday, when Scott Smith, superintendent of the Bossier Parish School System in northwestern Louisiana, issued a statement saying that coaches and players at Bossier schools are expected to stand during the national anthem. Principals and coaching staff would have “sole discretion in determining consequences” for the recalcitrant, Smith wrote.

The Shreveport Times reported that one unidentified principal in the parish suggested that punishment for non-standing student players could range from “extra running to a one-game suspension.”

A day after Smith issued his edict, Parkway High principal Waylon Bates issued a letter to parents and students, describing how things would be run in his corner of Bossier Parish:

“Parkway High School requires student athletes to stand in a respectful manner throughout the National Anthem during any sporting event in which their team is playing. Failure to comply will result in loss of playing time and/or participation as directed by the head coach and principal. Continued failure to comply will result in removal from the team.”

Tweeted out by Shaun King, a columnist for The Intercept, the letter quickly went viral, with the perhaps inevitable knee-jerk (rim shot!) comparisons by retweeters to Nazi Germany and North Korea. Michael McCann, a law prof at the University of New Hampshire and a legal analyst for Sports Illustrated, tweeted that the policy all but engraved an invitation for a lawsuit.

First Amendment isn't as robust in school settings as elsewhere, but a public school requiring students to stand for anthem invites lawsuit. https://t.co/ofxep5UFfB

To that point, the ACLU of Louisiana put Bossier Parish on notice that it could face legal action, firing off its own press release quoting Louisiana ACLU executive director Marjorie Esman’s condemnation of the knee ban.

“Bossier Parish is threatening to punish students for peacefully protesting racial injustice and taking a principled position for freedom and equality,” Esman stated. “This is antithetical to our values as Americans and a threat to students’ constitutional rights.”

Esman went on to call the policy “patently unconstitutional” and made reference — as did several other commentators on the controversy — to a nearly 75-year-old U.S. Supreme Court decision in West Virginia State Board of Education v. Barnette , which held that public schools could not force students to pledge allegiance to the flag on pain of expulsion and the criminal prosecution of their parents.

The case was the result of a challenge to West Virginia’s law on behalf Jehovah’s Witnesses who claimed  that it violated their religion’s strict prohibition on the worship of graven images. In 1943, the court ruled 6-3 that the free-speech clause of the First Amendment prevents students from being compelled to salute the flag and pledge allegiance to it. The majority opinion was written by Justice Robert H. Jackson, who would go on to prosecute Nazi war criminals during the Nuremberg trials.

The case is made difficult not because the principles of its decision are obscure, but because the flag involved is our own. Nevertheless, we apply the limitations of the Constitution with no fear that freedom to be intellectually and spiritually diverse or even contrary will disintegrate the social organization. To believe that patriotism will not flourish if patriotic ceremonies are voluntary and spontaneous, instead of a compulsory routine, is to make an unflattering estimate of the appeal of our institutions to free minds. We can have intellectual individualism and the rich cultural diversities that we owe to exceptional minds only at the price of occasional eccentricity and abnormal attitudes. When they are so harmless to others or to the State as those we deal with here, the price is not too great. But freedom to differ is not limited to things that do not matter much. That would be a mere shadow of freedom. The test of its substance is the right to differ as to things that touch the heart of the existing order.

If there is any fixed star in our constitutional constellation, it is that no official, high or petty, can prescribe what shall be orthodox in politics, nationalism, religion, or other matters of opinion, or force citizens to confess by word or act their faith therein. If there are any circumstances which permit an exception, they do not now occur to us.

Pertinent to the current controversy, Jackson explored the roots of compulsory obeisance to symbols, noting that “[t]he use of an emblem or flag to symbolize some system, idea, institution, or personality is a short-cut from mind to mind,” and that signs of respect toward such symbols include “a salute, a bowed or bared head, a bended knee” — though “what is one man’s comfort and inspiration is another’s jest and scorn.”

It’s interesting to note that West Virginia’s obligatory flag-salute originally involved what’s now known as the “Bellamy salute,” used nationwide at one time. Named for Francis Bellamy, who prescribed its use to accompany recital of the Pledge of Allegiance, which he authored in 1892, it fell out of favor for being identical to the hand gesture favored by followers of Adolf Hitler.

Does it matter that the school activity involved here is extracurricular sports, which is itself not compulsory? PBS NewsHour addressed that very question, quoting First Amendment expert  Frank LoMonte, executive director of the Student Press Law Center as saying that public institutions cannot withhold privileges based on a denial of constitutional freedoms.

Which brings to mind the words of Justice Jackson back in ’43:

“Those who begin coercive elimination of dissent soon find themselves exterminating dissenters. Compulsory unification of opinion achieves only the unanimity of the graveyard.”