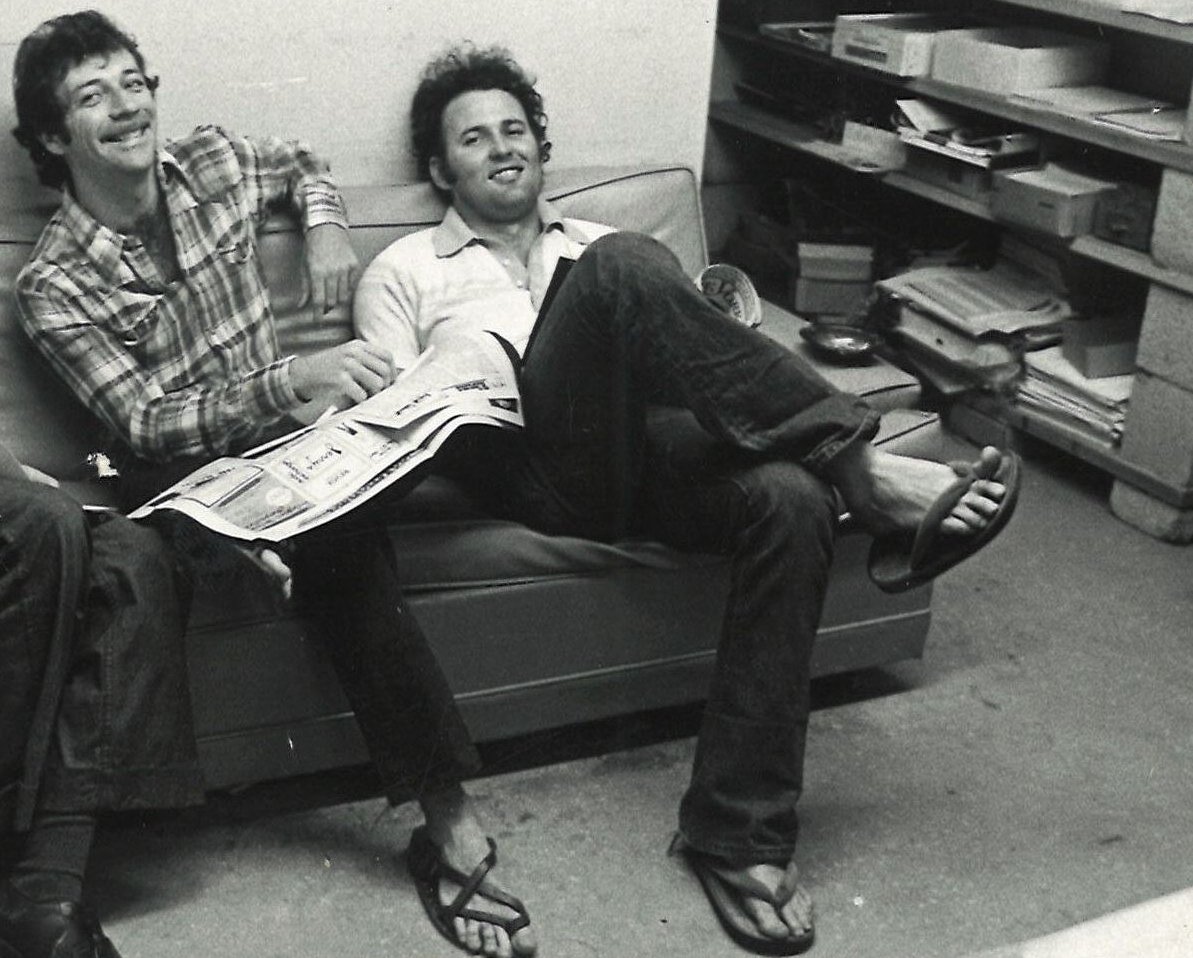 Michael Lacey (left) and Jim Larkin from the early days of the Phoenix New Times. (courtesy of Jim Larkin)

The ACLU, the DKT Liberty Project, the Cato Institute and the Reason Foundation filed amicus briefs Tuesday in support of the defendants' motion to dismiss in the Backpage case.

Four national non-profits dedicated to protecting civil liberties and personal freedom in the United States have lodged proposed amicus briefs with the federal court in Phoenix in support of a recent motion to dismiss by defendants in the Backpage case.

Three libertarian-minded organizations — the DKT Liberty Project, the Cato Institute and the Reason Foundation — joined forces in one brief, asking the court to grant the motion to dismiss. Meanwhile the ACLU of Arizona submitted its own amicus curiae, focusing on the First Amendment implications of the prosecution of veteran newspapermen Michael Lacey and Jim Larkin, as well as four other former executives of the now-defunct, online listings colossus Backpage.com.

Read the DKT/Cato/Reason amicus brief on the motion to dismiss.

The accused currently face a 100-count indictment that pits the First Amendment rights of publishers against Justice Department allegations that Backpage, once second only to Craigslist in the online classifieds market, facilitated prostitution across state lines via its adult section, which was one of several categories on the site, in addition to personals, apartment rentals, job listings, etc.

At the heart of the case is the government’s assumption that the ads in Backpage’s adult section for putatively legal services such as massages, escorts, dominatrixes and so forth, were actually selling illicit sex. But as the motion to dismiss and the amicus briefs point out, that is not an assumption that the First Amendment allows prosecutors to make.

DKT, Cato and Reason Weigh In

Attorneys Jessica Ring Amunson and Tassity Johnson, the authors of the DKT/Cato/Reason amicus, make a forceful argument that the government’s prosecution of Backpage’s erstwhile owners, Lacey and Larkin, and their co-defendants, “poses a grave threat  to individual liberty and the rights guaranteed by the First Amendment.”

In their introduction, Amunson and Johnson write:

The Supreme Court has held that the Constitution presumptively protects all speech from government infringement. The burden for rebutting that presumptive protection rests with the government…As a consequence, the government may not prosecute a speaker for his or her speech unless and until the government establishes that the speech is not protected.

But as the attorneys observe, that’s precisely what the government has done in the Backpage case: exposed the defendants to a costly prosecution; and in the case of Lacey and Larkin, raided their homes, seized all of their assets, and arrested and held them in prison for a week, before releasing them on bonds of $1 million each.

Read the ACLU’s amicus brief in the Backpage case.

The government’s prosecution, write the attorneys, is based on “the spurious assumption that third-party speech on Backpage that resembled unlawful speech was unlawful speech.”  In fact, the government characterizes the site’s adult ads as “obviously for” and “indicative of” prostitution, based on  the ads’ appearance, without proving any underlying illegality.

As a result, the lawyers argue, the prosecution is “presumptively unconstitutional.”

Moreover, the U.S. Supreme Court has ruled that the government in such cases must prove the defendants knowingly published “specific unprotected speech.” One precedent Amunson and Johnson cite is the high court’s 1959 decision in Smith v. California, which struck down a local ordinance that made it illegal “for any person to have in his possession any obscene or indecent writing or book.”

Even if a bookseller was unaware that a specific book could be considered obscene, and therefore unlawful, he or she would still be on the hook for it. SCOTUS found that impermissible, because it infringed on the First Amendment rights of the seller and the reading public, and it would have a chilling effect on bookshops, which might choose to sell only books that the management had personally inspected.

The analogy is apt. The government’s theory in the Backpage case is that Lacey and Larkin are criminally liable because they had a generalized knowledge that some of the adult ads on Backpage involved illegality. But the First Amendment, and, interestingly, the underlying charges under the Travel Act, require a specific knowledge and intent to promote the specific illegal act in question.

For the indictment, the government culled 50 ads from the millions that Backpage published during its nearly 13 years of existence in hundreds of cities worldwide. And yet, prosecutors are not claiming that the defendants ever saw these 50 ads, which the government says it can connect to illegal acts.

Obviously, Lacey and Larkin were not engaged in the mundane task of reviewing ads for publication. And most of the 50 ads the government cites were published after the two men sold their interest in the company in 2015.

The ACLU’s amicus brief lasers in on the First Amendment’s requirement of specific knowledge of wrongdoing. It also cites the Supreme Court’s decision in Smith, and quotes a portion of the ruling that, with the substitution of a word or two, could easily apply to the Backpage case.

In Smith, the Supremes wrote:

By dispensing with any requirement of knowledge of the contents of the book on the part of the seller…[e]very bookseller would be placed under an obligation to make himself aware of the contents of every book in his shop. It would be altogether unreasonable to demand so near an approach to omniscience.

The ACLU references other important Supreme Court cases along these same lines. For instance, the court’s 1962 decision in Manual Enterprises, Inc. v. Day addressed the notorious Comstock Act, which, in part, “imposed criminal and civil penalties” on anyone sending “obscene periodical advertisements” via the U.S. post.

According to the ACLU,

“The Court held that the company’s president could not be liable under the law where there was ‘no evidence that any of this material was shown to him’ so that he `was afforded no opportunity to judge for himself as to its alleged obscenity.'”

And, as in Smith, the court feared a chilling effect, since “publishers cannot practicably be expected to investigate each of their advertisers.”

Indeed, last year, the internet experienced that chilling effect after the dramatic arrests of Lacey and Larkin, the feds’ simultaneous shuttering of Backpage, and Congress’ passage of the Fight Online Sex Trafficking Act (FOSTA), which explicitly made the promotion of prostitution online illegal, though FOSTA was not utilized in the Backpage case.

Several adult-oriented websites voluntarily went dark, while others have ended aspects of their sites that at least hypothetically could have been used to advertise sex work.

In conclusion, the ACLU calls on the court to hold the government to the First Amendment’s strict standard and “not open the door to criminal liability merely for providing an online forum where others might have posted improper content.”

Adam and Eve and Phil

Unlike the ACLU’s brief, the DKT/Cato/Reason amicus places the Backpage case in the broader context of the government’s periodic crackdowns on sexual expression. It’s a pattern with which the DKT Liberty Project is quite familiar. The organization’s founder, Philip D. Harvey, co-founded the longtime adult products retailer, Adam & Eve, and before the internet was a global phenom, he successfully fought against the Reagan administration’s war on pornography.

As Amunson and Johnson relate, in the 1980s, the DOJ under right-wing prude, U.S. Attorney Edwin Meese, “aimed at driving the adult entertainment industry to extinction by undermining its profitability.”

Adam & Eve’s offices were raided by law enforcement, and prosecutors attempted to “extort plea agreements” from defendants, threatening them with over-zealous prosecutions that would bankrupt the accused. Harvey, however, refused to plead and eventually prevailed in 1992 at the Tenth Circuit Court of Appeals.

It is with that history in mind that Amunson and Johnson write that the Backpage case marks “the latest chapter in a long history of government attempts to suppress and censor disfavored speakers, especially those disfavored for offering sexually oriented expressive materials.”

Fortunately,  they add, the Supreme Court “has long recognized that such attempts are invidious to the First Amendment” and “has erected extensive bulwarks to protect against them.”

For all of Front Page Confidential‘s previous coverage of this case, see:
U.S. v. Lacey & Larkin

Note: Michael Lacey and Jim Larkin founded the alternative newsweekly the Phoenix New Times in 1970, ultimately growing it into a national chain of 17 papers that included both the Village Voice and the LA Weekly. In 2012, Lacey and Larkin sold the chain, then known as Village Voice Media (now Voice Media Group) to company executives. Lacey and Larkin founded Front Page Confidential in 2017 to cover issues related to the First Amendment and free expression. 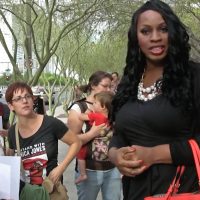