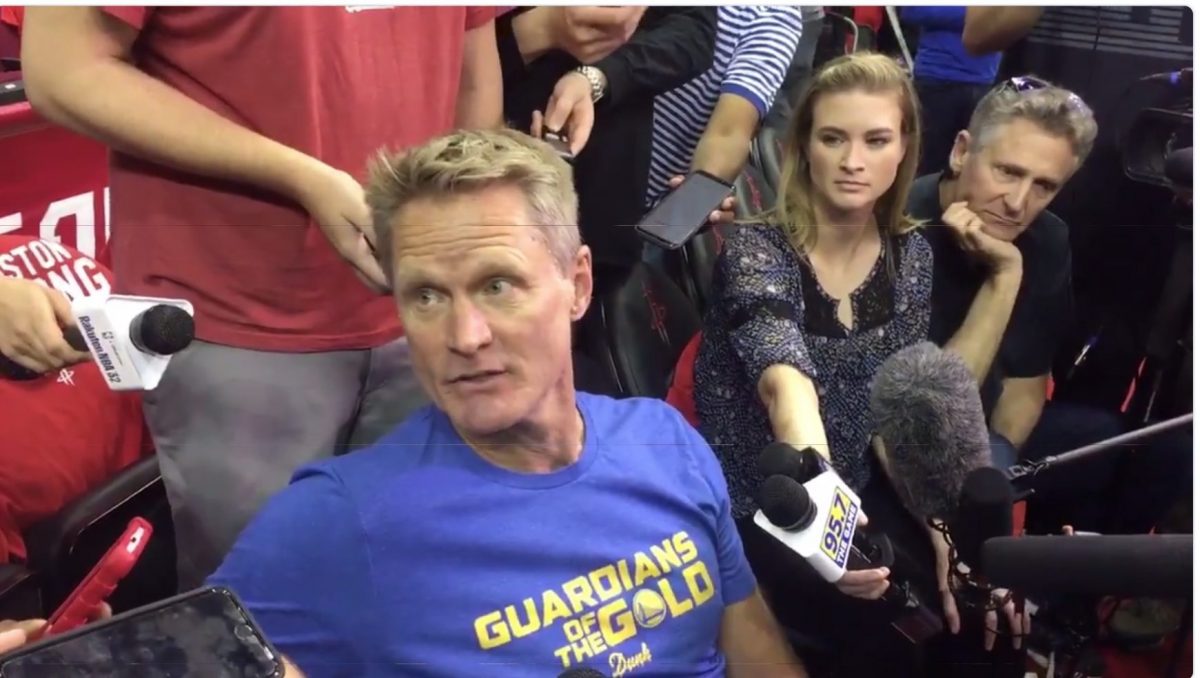 Requiring athletes to stand for the playing of "The Star-Spangled Banner" before every sporting event doesn't run afoul of the First Amendment. But is it the right thing to do?

Before Game 5 of the NBA Western Conference playoffs on May 24, a reporter approached Steve Kerr. She asked the Golden State Warriors coach to share his thoughts about the National Football League’s announcement earlier that day that it will require all players either to stand during the playing of the national anthem or to stay off the field.

Here’s what Kerr had to say (see full transcription below video embed):

“I think it’s just typical of the NFL. They’re just playing to their fanbase, and they’re just basically trying to use the anthem as fake patriotism, nationalism, scaring people. It’s idiotic. But that’s how the NFL has handled their business.

“I’m proud to be in a league that understands patriotism in America is about free speech, about peacefully protesting. I think that our leadership in the NBA understands that when the NFL players were kneeling, they were kneeling to protest police brutality, to protest racial inequality. They’re weren’t disrespecting the flag or the military. But our president decided to make it about that and the NFL followed suit, pandered to their fan base, and created this hysteria.

“It’s kind of what’s wrong with our country right now. People in high places are trying to divide us, divide loyalties, make this about the flag — as if the flag is something other than what it really is. It’s a representation of what we’re about, which is diversity, and peaceful protest, abilities, the right to free speech. So, it’s really ironic, actually, what the NFL is doing.”

Across the internetverse, reaction to Kerr’s opinion has been mixed.

Some have correctly pointed out that the NBA’s policy, which predates the NFL’s, is actually pretty darn similar.

Appeasing fans? We are called Americans. And we pay your salary, ass. https://t.co/cSHyzWWMbD

And some focused on the point Kerr was attempting to make, regardless of whether they agreed with it:

The NFL policy is not a 1st Amend. violation. But I still abhor it. As a private entity, it can do that. But, the NFL is quintessentially American, and there is nothing more American than freedom of expression. Conservative political correctness is still political correctness.

Imagine Steve Kerr having a better understanding of freedom and patriotism than the President of the United States. Then realize you don’t have to imagine it. Wow, crazy.

Golden State @warriors coach Steve Kerr is accusing the @NFL of promoting "fake patriotism" amid the league's new policy of fining players and personnel who don't stand for the national anthem. https://t.co/0ehcHC8Fp3 pic.twitter.com/Hyb5mRrna3

To be clear: The NFL’s anthem policy does not violate the First Amendment. That’s because the NFL is not a government entity. (Same goes for the NBA.) But the policy is undeniably a free-speech issue. Just because a private business can control aspects of the speech of its employees doesn’t mean it should use that prerogative in every instance.

And of course, those who disagree with the way a private business does business are free to say so, and to vote with their wallet if they so choose.

But the ways in which sports franchises blatantly align themselves with patriotic — and in many cases, militaristic — imagery is curious, and worth examining. (Liberals aren’t the only ones who think about it, by the way.) And bear in mind that privately owned leagues aren’t the only red, white, and blue enthusiasts. The Olympic Games, as we all know, are a veritable five-ring circus of jingoism in this country.

The U.S. government doesn’t require teams to play “The Star-Spangled Banner” before every professional sporting event.

Not even the current administration could pull that off.

It would be a violation of the First Amendment.