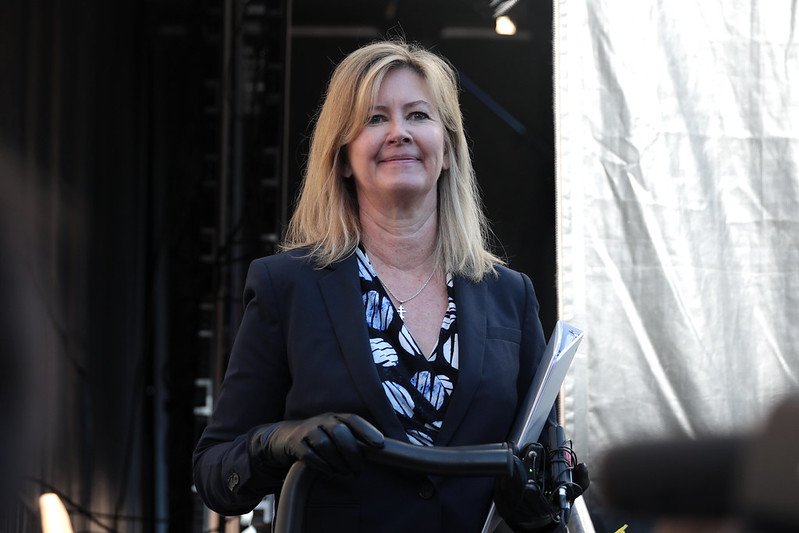 In a stunning development, federal Judge Susan Brnovich recused herself from the Lacey/Larkin trial Friday, after presiding over a mistrial in the case in September.

Brnovich, the wife of Arizona Attorney General Mark Brnovich, gave no reason for the surprise move in a terse order to the court making the announcement. The statement also said the case had been reassigned by lot to federal Judge Diane J. Humetewa.

On Sept. 14, Judge Brnovich declared a mistrial in the first trial of Lacey, Larkin and four co-defendants after just eight days of proceedings. She previously refused to recuse herself from the case after the defense pointed out a possible conflict concerning AG Brnovich’s hostile statements and positions regarding Backpage. AG Brnovich is currently a Republican candidate for the U.S. Senate.

Humetewa is, technically, the fourth judge on the case. Federal Judge Steven Logan was first assigned to the case in 2018, when Lacey, Larkin, et al., were indicted on up to 100 counts of money laundering, conspiracy and facilitating misdemeanor state prostitution offenses in violation of the U.S. Travel Act.

“This case is a hot mess. Someone’s going to have to take a look at the government’s overreaching issues. No judge wants to have to deal with that.” — former Arizona State Bar President Michael Piccarreta

The defense has moved that the case be dismissed on the grounds that it violates the U.S. Constitution’s prohibition on trying a defendant twice for the same crime, aka, double jeopardy.

“Someone’s going to have to take a look at the government’s overreaching issues,” he says. “No judge wants to have to deal with that.”

Indeed, there’s been a wealth of prosecutorial misconduct in this case, everything from the destruction of exculpatory evidence — notably, the Backpage website itself and its server data — to the seizure of millions of dollars in assets, including monies derived from the sale of Village Voice Media, a chain of 17 alt-weeklies that Lacey and Larkin once owned.

The government also seized more than $10 million from lawyers for the defense, money set aside for legal expenses. Piccarreta was at one-time counsel for one of Lacey and Larkin’s co-defendants. Nine months into the case, the government seized money in Piccarreta’s account for his client’s defense, forcing him to withdraw.

“What was particularly offensive is that they did not seize the funds from the lawyers whose client pled guilty,” he says, referring to Carl Ferrer, the owner of Backpage as of 2015, when Lacey and Larkin sold it to him.

In 2018, Ferrer pled guilty to one conspiracy count in federal court.  He has agreed to testify for the prosecution as part of his plea deal.

“Same source [for his] money,” Piccarreta adds. “But [Ferrer] played ball with the government, and told a story that the government liked.”

Prosecutors in the case seek to hold the defendants vicariously liable for the crimes of others — crimes allegedly connected to adult ads for escorts, massage, dating and other such categories.

However, previous federal and state courts have ruled these ads to be protected, legal speech.

During the brief trial in September, prosecutors were undercut by their own witnesses, such as during the testimony of a California cop who stated that he could not make an arrest based on the vague language and sometimes nude or semi-nude photos of women in the advertisements.

The cop also averred that the ads were not illegal and could be advertising legal adult services, such as striptease or live sex shows.

Prosecutors caused a mistrial by repeatedly accusing the defendants of being involved in heinous crimes that they are not charged with: specifically, sex trafficking and child sex trafficking, which involve either inducing adults into commercial sex via force, fraud or coercion, or causing minors to be involved in same.

Prostitution, by contrast, involves commercial sex between consenting adults. A majority of Americans believe prostitution should be decriminalized.

In declaring a mistrial, Judge Brnovich said prosecutors had ignored her warnings not to emphasize sex trafficking and child sex trafficking, abusing the leeway she had granted them by employing prejudicial rhetoric.

Though she said that she did not believe the prosecution’s actions had been intentional, “the cumulative effect of all of that is something that I can’t overlook and won’t overlook.”