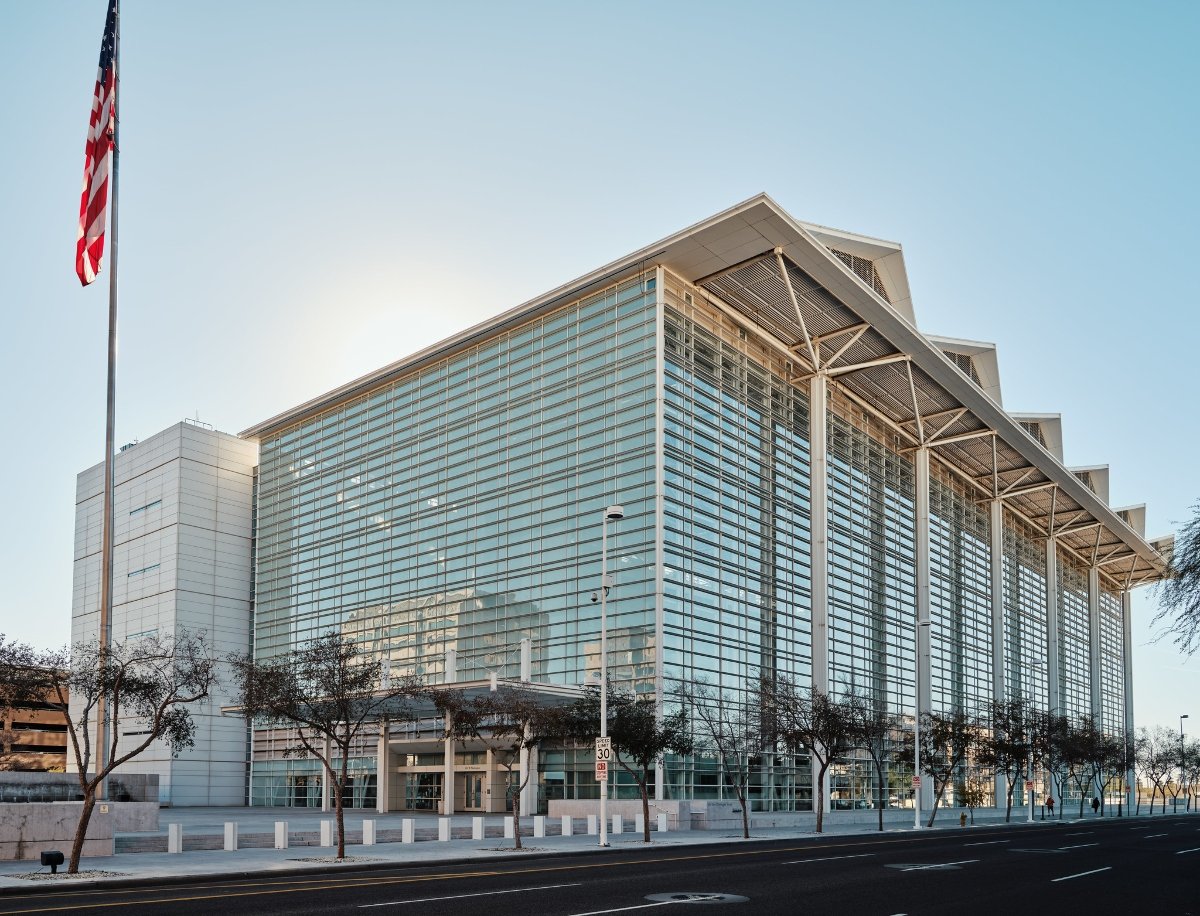 The Sandra Day O'Connor U.S. Courthouse in Phoenix, a sweltering greenhouse of glass and steel. (Tony Webster via Flickr)

Hypothetically, opening arguments could begin Thursday afternoon in the Lacey/Larkin trial, after all jurors have been vetted by voir dire.

The grueling process of picking a jury in the Lacey/Larkin trial played out Wednesday in the ultra-humid “special proceedings courtroom” of downtown Phoenix’s Sandra Day O’Connor U.S. Courthouse, itself a hothouse of steel and glass built by some architectural sadist who felt the Arizona sun wasn’t punishing enough, so he made our federal courthouse into a colossal magnifying glass.

Ironically, the air-conditioning seemed to kick in just as proceedings ended for the day. So there’s hope for Thursday, when, according to the defense attorneys I spoke with, jury selection will likely be finalized. The court went through two panels of about 30 persons each, and there were a number of no-shows. With about 30 or so remaining,  opening arguments could hypothetically begin Thursday afternoon or Friday.

Potential jurors were masked up and seated throughout the courtroom, with some prosecutors and defense staff, along with a few press and other observers, relegated to standing-room-only in a gallery above the courtroom. The defendants, with one attorney each, were seated in the well before the judge.

The jurors, identified in court by numbers, had previously filled out lengthy questionnaires about the case sent to them by mail. As a result, the court limited attorneys to follow-up inquiries during in-person questioning, known as voir dire.

Defense attorneys previously have asked that federal Judge Susan Brnovich permit them to ask questions regarding her husband, Arizona Attorney General Mark Brnovich, who is running for U.S. Senate in the 2022 GOP primary. Since he declared, he’s been on TV ad nauseam in a bid for attention and funds.

The defense wants to know what jurors they think of AG Brnovich, and if they have strong feelings about him that might impact deliberations. The government remained neutral on the issue. But so far, Judge Brnovich has stuck to her declaration that she doesn’t want her husband’s name brought into the case.

Another white man with graying hair said, “I don’t like escorts, but I know they’re legal.” He also said his wife was involved with the controversial anti-trafficking group, Operation Underground Railroad.

Arguably, it already is in the case. I mean, how many people in this state are named Brnovich? In October 2020, Brnovich denied a defense motion that she recuse herself.  The motion argued recusal was warranted because: 1) the AG disparaged Backpage in the past and asked Congress for the authority to prosecute the company; and, 2) because the AG stands to gain politically from the outcome.

This is where I should remind you that veteran newspapermen Michael Lacey and Jim Larkin, along with four co-defendants, are charged with up to 100 counts of facilitating misdemeanor state prostitution offenses in violation of the U.S. Travel Act, as well as attendant money laundering and conspiracy charges.

In Lacey and Larkin’s case, the charges stem from their former ownership of the classified listings site, Backpage.com, from 2004 to 2015, when they sold it to the government’s star witness, former Backpage CEO Carl Ferrer. If you’re new to the case, the best backgrounder is an award-winning documentary by Reason magazine, “The Rise and Fall of Backpage.”

Lacey and Larkin released a pre-trial statement this week, touting their innocence and decrying their prosecution as “epic government overreach” and an “unprecedented assault on the First Amendment.”

I’ve also assembled a list of salient points that readers and media should consult.

The Courts vs. Public Opinion

Interestingly, there were about eight federal and state court rulings finding that adult-oriented ads uploaded to Backpage by its users were presumptively protected by the First Amendment and Section 230, the federal law generally holding interactive websites blameless for content posted by users.

But the First Amendment is a rather rarified concept to many. The government takes the position that the ambiguous language in these ads was illegal on its face, though the courts have consistently said otherwise. Judge Brnovich has yet to rule on whether the jury will receive instructions on the First Amendment.

The obstacles for the defense were illustrated by a number of possible jurors who thought escorts and prostitution are the same thing (they’re not), and who expressed a distaste for sex work. Attorneys queried the mostly white, mostly middle-aged crowd about the prospect of having to view explicit images, and some jurors said they were anti-pornography.

Under questioning, one Anglo woman in her 40s declared she was “opposed to any form of” pornography.

A white man who looked to be in his 30s was bothered by the idea that escorts were legal and regulated in certain jurisdictions, saying, “I don’t think it’s healthy or physically good for people to do that . . . It’s a moral issue for me.”

Another white man with graying hair said, “I don’t like escorts, but I know they’re legal.” He also said his wife was involved with the controversial anti-trafficking group, Operation Underground Railroad.

One outlier to the trend was an African-American man who, when asked about sex work, said the government should “regulate it.” Online platforms with adult ads? He said “some policing” by the platforms would be necessary, but that it was hard for platforms “to do things right all the time.”

Judge Brnovich struck about 17 jurors for cause, such as financial hardships or health reasons. Each side is expected to use their peremptory strikes — which do not require an explanation — after the final panel is questioned.  The judge will seat a jury of 18, 12 jurors plus six alternates.

I’m not allowed to Tweet in the courtroom, the breaks are short and Tweeting inside the larger courthouse was not possible for me on Wed. So, if you follow me on Twitter @stephenlemons, look for updates at lunchtime and after 5 p.m.