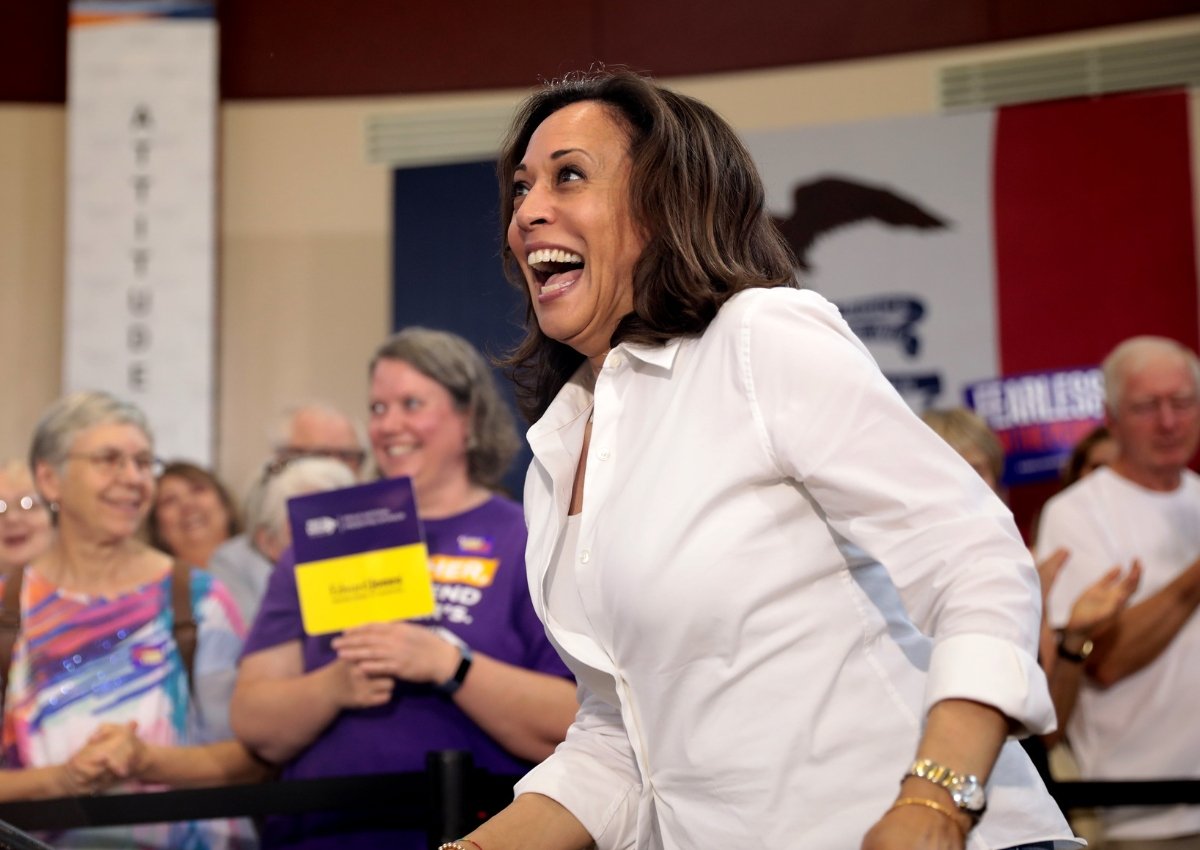 Kamala intends to clean up the internet for you. What could go wrong? (Gage Skidmore via Flickr; photo cropped from original.)

Kamala Harris' contempt for the First Amendment and the free speech rights of others knows no bounds; her attempt to deplatform our Orange Caligula is a case in point.

California Senator Kamala Harris wants to save you from the mean man with raccoon eyes who inhabits the White House by deplatforming POTUS from Twitter, offering the latest example of the Democratic presidential contender’s abiding contempt for freedom of speech and the First Amendment.

In a recent series of media stunts no doubt aimed at boosting her lagging poll numbers, Harris demanded that Twitter suspend President Donald Trump’s account, arguing that Trump was threatening the whistleblower in the Ukraine affair by suggesting the person might be a “spy” in one Tweet. In another that Harris took exception to, Trump targeted Democratic House Intelligence Committee Chairman Adam Schiff, tweeting that Schiff may have committed “treason,” which, hypothetically, could be punished by death.

The words of a president matter. Trump has again shown he is irresponsible and endangering others with his tweets. He should lose the privilege to be on Twitter. pic.twitter.com/t2w8cw3uZW

“I think there’s plenty of evidence to suggest that [Trump’s] irresponsible with his words in a way that could result in harm to other people,” Harris told CNN host Anderson Cooper on Sept. 30. “And so the privilege of using those words in that way should probably be taken from him.”

Harris followed up on Oct. 1 with a letter to Twitter CEO Jack Dorsey, in which she made the case that Trump should be banished to the outer darkness beyond the Twitterverse because he was inciting violence against Schiff and the whistleblower and had, in a separate Tweet, quoted some wacky pastor who told Fox News that impeaching the president would cause a “Civil War-like fracture” in the country.

Left-wing ditto heads on social media emphatically echoed the call for censorship from Harris. But at least one prominent Democrat was critical of Harris’ push to rid Twitter of Trump: Hawaii Congresswoman and presidential candidate Tulsi Gabbard, who told a reporter that she did not agree with Harris because, “freedom of speech is something that is an important, foundational, right in our democracy.”

Asked if she agrees with @KamalaHarris that President @realDonaldTrump's Twitter account should be suspended, @TulsiGabbard says, "No. I think freedom of speech is something that is an important, foundational, right in our democracy." pic.twitter.com/6o1DYNVRFK

Gabbard, an Iraq War veteran, agreed that Trump’s tweets were causing divisiveness, but said this was “one of the many reasons” voters should remove him from office.

“We can’t just cancel or shut down or silence those we disagree with, or who say things that we strongly disagree with or abhor,” she explained. “These freedom and principles enshrined in our constitution are things we have to take very seriously.”

She added, “I and so many others who wear the uniform of this country are willing to give our lives to protect and defend freedom of speech, even for those who are saying things we disagree with.”

Whatever one thinks of Gabbard’s candidacy, she gets major points for holding Harris to account for her abysmal pre-Senate record as a prosecutor, and for vigorously defending freedom of speech during a time when many Dems, including Harris, seem to have abandoned what once was a standard tenet of the left.

If you think "cancel culture" sucks now, just wait until the government gets involved https://t.co/Q6yujiLTBG

Harris’ move to silence Trump on Twitter was preposterous from jump. Arguably, everything a POTUS says and does is news, and Trump has more than 65 million followers on the platform. Sure, Twitter could ban him tomorrow, but the White House has its own footprint on the internet that’s not going anywhere.

And then there’s this little thing called Television. Only 22 percent of Americans are on Twitter, according to a Pew Research study from April, whereas, 96 percent of U.S. households have at least one Television set.

Trump can and does garner more attention for his batty pronouncements by ranting before reporters on the White House lawn than he does via Tweet. Plus he can get on TV almost any time he wants. As Reason‘s Elizabeth Nolan Brown recently wrote, “Twitter is not the problem, Trump is.”

In other words, booting Trump from Twitter achieves bupkis.

Granted, no one has a Constitutional right to be on Twitter. However, when a member of the government such as Harris uses her influence to tell a media outlet who or what it should publish or host, the First Amendment certainly is implicated.

Actually, Harris has no problem with utilizing the power of the state to violate others’ civil liberties, including freedom of speech. She has promised that if she becomes president, her administration “will hold social media platforms accountable for the hate infiltrating their platforms.” Though, as Harris knows, so-called hate speech is in fact protected by the First Amendment.

Hey, @jack. Time to do something about this. https://t.co/es2fJ5PNRV

In addition, Harris has proved an implacable foe of Section 230 of the Communications Decency Act, the law that fosters free speech on the internet by holding platforms harmless for third party content posted to their sites. In 2018, Harris helped pass the Fight Online Sex Trafficking Act (FOSTA), which carved out an exception to 230 and outlawed online adult ads in the U.S.

FOSTA caused a wave of internet self-censorship and created a deadly situation for sex workers, who reportedly used those ads to screen for predators.

Harris also praised one of the most egregious acts of direct government censorship in the 21st Century: the FBI’s seizure of the online listings giant Backpage.com on April 6, 2018, along with the indictment of seven current and former executives and owners of Backpage, including veteran newsmen Michael Lacey and Jim Larkin, on 100 counts of facilitating prostitution, money laundering and conspiracy.

The feds’ eradication of Backpage caused the migration of the adult ad market to websites located in other countries, out of the reach of U.S. law enforcement. Backpage largely had cooperated with law enforcement to track down minors and those exploiting them, a resource now lost to police.

INBOX: Kamala Harris pens formal letter to Jack Dorsey asking him to kick Trump off Twitter, writing "these are blatant threats. We need a civil society, not a civil war. pic.twitter.com/zbC4dKUyEu

In a February interview with The Root, Harris hypocritically claimed to be open to some form of decriminalization, while justifying the closure of Backpage because “the people who were running Backpage basically thumbed their nose at us.”

Two years before the feds’ takedown of Backpage, Harris, then California’s attorney general and a candidate for the U.S. Senate, brought state charges related to “pimping” against Lacey, Larkin and Backpage CEO Carl Ferrer, on the dubious legal theory that any business that accepts money from someone later proven to be (or assumed to be) a prostitute is the modern-day version of Dolemite.

By that time, Lacey and Larkin had sold their interests in the company to Ferrer. Still, after they were arrested with much ballyhoo in early October 2016, Harris paraded all three men before news cameras in orange jumpsuits as they stood in court, locked in a medieval cage, while the AG’s minions unsuccessfully fought their release on bond.

(Note: In 2018, Ferrer cut a plea deal with federal and state prosecutors in return for his cooperation and willingness to testify against his former business partners.)

Thing is, Harris knew she lacked the authority to bring those charges. In 2013, she was one  of 47 state attorneys general who signed a letter to Congress complaining that they could not prosecute Backpage under state laws because Section 230 shielded the listings hub.

Shortly after Harris was elected to replace outgoing U.S. Senator Barbara Boxer, a California judge dismissed the pimping charges, ruling that the prosecution was precluded by Section 230. In December 2016, shortly before leaving the AG’s office, Harris ignored the court’s decision and refiled the pimping charges with another judge, slapping the defendants with a slew of money laundering charges to boot.

The new judge tossed the second round of pimping charges in August 2017. Lacey and Larkin’s attorneys have since moved that the surviving money laundering charges be dropped, in part because Harris was aware that she did not have the authority to prosecute the men.

The motion also argues that during its ongoing Backpage prosecution, the Golden State AG’s office engaged in multiple violations of the state’s new privacy law, the California Electronic Communications Act (CalECPA), which, among other things, prevents prosecutors from going on fishing expeditions of website data with mere subpoenas.

Plus 11 more receiving 1% or lesshttps://t.co/tY6ukaGSzA

Talk about thumbing one’s nose. Harris has done so repeatedly to the highest law of the land, the U.S. Constitution. She scoffs at the rights of defendants, violates the First Amendment without compunction and arrests publishers and journalists, even when she understands that the law is not on her side.

That is a dangerous person to have in high office. Thankfully, Democratic voters seem to have already figured that out.