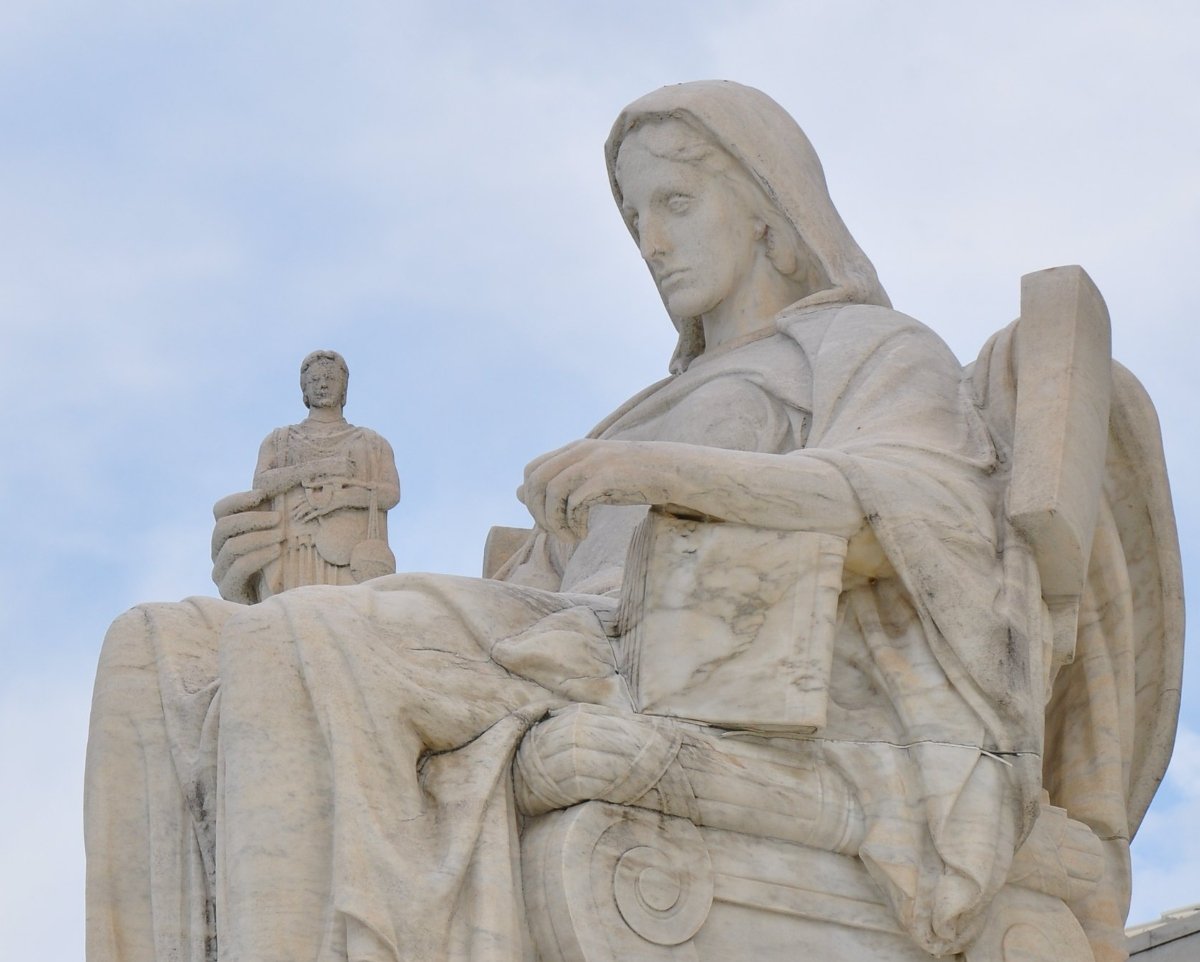 "Contemplation of Justice," by James Earle Fraser, located at the entrance to the U.S. Supreme Court. (Ted via Flickr)

Michael Lacey and Jim Larkin have petitioned the Ninth Circuit to order Judge Susan Brnovich to recuse herself from their case due to positions taken by her husband, Arizona AG Mark Brnovich.

On Nov. 18, veteran newspapermen Michael Lacey and Jim Larkin took the extraordinary step of filing a petition for a writ of mandamus with the Ninth Circuit Court of Appeals, asking it to intervene in their ongoing criminal case and order Judge Susan Brnovich to recuse herself from all future proceedings.

That’s something she flatly refused to do on Oct. 23, when she rejected arguments that positions taken by her husband, Arizona Attorney General Mark Brnovich, regarding the now-defunct classified listings site Backpage.com had created the grounds for recusal.

The defense contends that AG Brnovich, others on his behalf and organizations with which he is associated with have vilified Backpage, assumed its complicity in sex trafficking, and drawn conclusions about facts that will be at issue in the trial of Lacey, Larkin and their four co-defendants, which is scheduled to begin April 12, 2021, almost three years to the day after they were arrested by the FBI.

The AG’s inaccurate assumptions about Backpage go to the heart of the case and raise the specter of potential bias on behalf of the judge.

Read: Lacey and Larkin’s petition to the Ninth Circuit Court of Appeals for a writ of mandamus.

The petition argues that the AG “has interests that could be significantly affected by the outcome of the case,” and that the AG’s statements and actions “could cause reasonable people to question the court’s impartiality.”

As a result, the petition insists that recusal is required under 28 U.S. Code § 455, the federal law that states that any justice, judge or magistrate “shall disqualify [herself] in any proceeding in which [her] impartiality might reasonably be questioned.”

But after deliberating over the request, Judge Brnovich ruled that recusal was “not warranted,” stating in her order that she was “confident” she could “preside over this case without any bias” on her part. (Note: The defense doesn’t allege actual “bias,” nor does it need to. The appearance of partiality is enough to require recusal.)

In her ruling, she also confided that when the case was first assigned to her, in March 2019, she “reviewed the case for any possible issue for recusal and found none.”

However, the defense believes that when Judge Brnovich inherited the case, she should have disclosed any potentially disqualifying information in the public record to both the prosecution and the defense.

Judge Brnovich “said nothing to petitioners about any potential bases for recusal,” defense counsel state in the petition.

Since her order is not appealable until after a trial in the case of a guilty verdict, the defense is attempting to secure a writ of mandamus (Latin for “we order”), in which a higher court would instruct Judge Brnovich to step aside.

In her Oct. 23 ruling, Judge Brnovich wrote that, prior to being assigned the case, she was aware of the AG’s “stance against human trafficking,” determining that “there was no tie to this case or any of the defendants.”

However, the petitioners point to public pronouncements made by Brnovich and his office, namechecking Backpage and asserting that the site was guilty of facilitating prostitution, and more notoriously, sex trafficking, a form of human trafficking that involves either minors in commercial sex, or adults induced into the sex trade via force, fraud or coercion.

In fact, Lacey and Larkin are charged with 100 counts of conspiracy, money laundering and the facilitation of prostitution (aka, consensual, albeit illegal, commercial sex among adults) in violation of the U.S. Travel Act. The federal government and others often conflate prostitution with sex trafficking and vice versa.

The charges allegedly stem from 50 adult-oriented ads posted to Backpage by third-parties unknown to them. These were among the millions of classified ads that appeared on Backpage at any given time, for everything from apartments for let and car sales to adult services, such as striptease and escorts.

Neither man saw the ads in question, and they steadfastly maintain their innocence.

Moreover, both federal and state courts consistently held that Backpage’s operation was legal and protected by the First Amendment and Section 230 of the Communications Decency Act, the federal law that generally holds interactive websites harmless for user-generated content.

Certainly, they deserve a fair trial and jurist whose impartiality cannot be reasonably questioned.

But on Sept. 10, a member of the defense team ran across a booklet online published by the AG’s office, titled Human Trafficking, Arizona’s Not Buying It, which begins with a “Letter from Mark” featuring a photo of AG Brnovich.

The booklet decries Backpage as “an online advertising site used frequently to purchase sex,” and claims, “Over 300 ads are placed each day in Phoenix on Backpage.com for adult services – with an estimated 20% for girls under 18.”

Interestingly, the booklet was published in June 2018, two months after Backpage was seized and taken down by the federal government, which coincided with the arrests of Lacey, Larkin and the others. It was republished in English in Dec. 2019 and in Spanish in June 2020, although without the references to Backpage.

Based on debunked stats, the booklet’s skewed, contentious statements mirror the false allegations against Lacey and Larkin.

As the defense’s petition notes, the booklet also “directs readers to a number of websites” belonging to advocacy groups “associated with the government’s trial witnesses,” which make “inflammatory and highly prejudicial comments” about Backpage and the defendants.

The defense team’s discovery of the booklet prompted a further investigation of the AG office’s statements and positions on Backpage. The probe revealed a plethora of anti-Backpage propaganda.

As recently as Aug. 19, AG Brnovich promoted a webinar by his office on “Human Trafficking for Parents,” found on the AG’s website.

In it, the narrator flashes a screenshot of the FBI notice announcing Backpage’s seizure. She identifies Backpage as where “the vast majority of all advertisements were posted for sex trafficking and sexual exploitation.”

The narrator also points to “two very trustworthy sources that we always want to use,” specifically, the ASU Office of Sex Trafficking Intervention Research and the Polaris Project. She tells viewers that they can find more info from such organizations as Trust Arizona, Shared Hope International, and the National Center for Missing and Exploited Children.

All of these groups are veritable fonts of slanderous information about Backpage and its practices. The petition notes that “[at] least seven of the government’s witnesses are associated with those organizations.”

The AG’s office “partners” with this cavalcade of anti-trafficking nonprofits, and repeats their statements about Backpage. The AG himself has appeared in videos for some, and has spoken at one of their events.

Perhaps most egregiously, in Aug. 2017, Brnovich, along with 48 other state and territorial AGs, signed a letter to Congress that asked for revisions to Section 230 of the CDA. This, so the AGs could each seek to prosecute Backpage for perceived illegality.

“[S]tate and local law enforcement agencies have been left powerless to act against online classified ad services, such as Backpage.com, which have constructed their business models around advertising income gained from participants in the sex trade.”

The missive also accused Backpage of “facilitating — and profiting from” child sex trafficking, a claim Brnovich repeated in a press release touting the letter, which he amplified with a tweet.

The judge and the AG reportedly have been married for 23 years, and they each have supported the other in their respective careers.

Which would not be an issue if Judge Brnovich was not presiding over this case, or if AG Brnovich had not waged a rhetorical campaign against Backpage, weighing in on issues that will be fought over at trial.

In her order refusing to recuse herself, Judge Brnovich asserted that AG Brnovich “has no financial or proprietary interest” in the case.

Regarding the defendants’ suggestion that the case could impact the AG’s political career, she writes that because her husband “has been elected as Arizona Attorney General in two consecutive terms,” he’s not eligible to run again.

However, like most politicians, AG Brnovich reportedly yearns for higher office, specifically to replace Arizona Governor Doug Ducey, who is termed out in 2022. Various state publications, including the Arizona Republic, the AZ Mirror and the Arizona Capitol Times, have made mention of Brnovich’s ambition in this regard, though the AG himself has made no formal declarations.

The judge in her order observed that the AG is not prosecuting the case; rather, the federal government is. So the outcome is “exceptionally unlikely to affect his reputation.”

But the petition counters that the AG need not be the prosecutor for the result of the trial to affect his reputation. And in a recent article in Reason Magazine, senior editor Elizabeth Nolan Brown makes the same point.

“It’s certainly not unreasonable to suggest that Mark Brnovich’s reputation may take a hit if—after years of bashing Backpage, partnering with the government’s witnesses against Backpage on various initiatives, and putting out myriad public statements that turn on the core issues in this case—the Backpage crew is not only acquitted of the government’s allegations but his wife plays a role in that.”

Susan Brnovich is the third judge to sit on the case. The first, Judge Steven Logan, abruptly recused himself without giving a reason in March 2019. The case was then randomly assigned to Judge Douglas Rayes, who immediately recused himself, apparently because he is friendly with attorneys on both sides.

According to court precedent, the objective standard for the appearance of bias is if “a reasonable person with knowledge of all the facts would conclude that the judge’s impartiality might reasonably be questioned.”

Judge Brnovich, in her order, declared that this was “not a close call,” because “a reasonable person apprised of the facts would not question the court’s impartiality.”

The defense, in its petition for mandamus, disagrees, stating:

Judge Brnovich’s Oct. 23 order was unusual in other respects.

In it, she struck from the record an affidavit offered by the defense from retired jurist Vaughn R. Walker, the former Chief Judge for the U.S. District Court for the Northern District of California, who opined that the circumstances of the case presented “a compelling ground for recusal.”

She also declared that the defense’s claim to have discovered the AG’s booklet in Sept. 2020 was “unbelievable,” despite the sworn statements from defense attorneys for six separate law firms.

It was a declaration Michael Lacey responded to in a recent editorial for this publication entitled, “A Tourette’s Quinceanera.”

Lacey writes that two months after their arrest, when the AG’s booklet was published, he and Larkin “were raising bail, finding lawyers, explaining to family, figuring out transportation, trying to sort out what hit us and soothing spouses.”

“We were sticking a straw up through the tsunami of sewage trying to breathe.

“We did not keep up with the thoughts of the county recorder, the pronouncements of the mayor of Yuma or the ravings of the village idiots in Cornville.

“Sorry your honor . . . this list of things we missed includes your husband’s J’accuse.”

Was Judge Brnovich aware of the booklet, the letter and the numerous other derogatory statements about Backpage by the AG and others allied to him? That’s one of many tantalizing questions surrounding this issue, which may ultimately be resolved by the Court of Appeals.