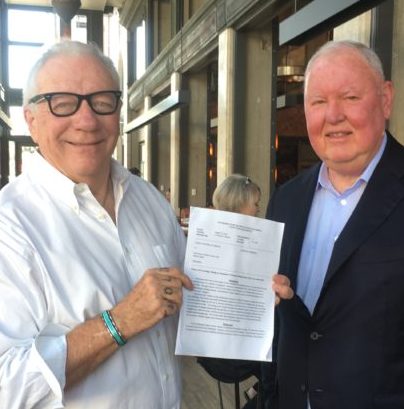 During a hearing in Sacramento, Judge Brown read aloud from his 18-page ruling, asserting that Section 230 of the Communications Decency Act of 1996 (CDA) “provides broad immunity for internet service providers from both federal and state prosecutions.” Brown further noted that the Ninth U.S. Circuit Court of Appeals has instructed that this immunity “be applied liberally” and ruled that the prosecution’s own complaint demonstrated that the defendants engaged in “protected publisher functions” under Section 230.

While Brown threw out 15 of the 40 counts against the Backpage defendants, he let stand the remaining charges, which allege wire fraud and money laundering.

Moments later, Lacey, Larkin, and Ferrer stood before the judge and pleaded not guilty to the surviving charges. Brown set the next hearing in the case for October 3.

After the hearing, the defendants and their attorneys said they were pleased with the ruling, despite the charges still outstanding.

“It’s a tremendous legal victory for free speech and for the internet,” Lacey said. “Our lawyers did a terrific job.”

Lacey waved off the pending allegations that Backpage attempted to mislead banks regarding the nature of some financial transactions and “laundered” funds.

“I think this is a picayune point that our lawyers will defend against vigorously,” he said. “I don’t think anybody having anything to do with financial transactions did anything illegal. That’s just my opinion.”

Backpage was born in the early 2000s, when Lacey and Larkin were running New Times Media, a burgeoning nationwide chain of alternative weekly newspapers they’d been building since 1970, when they helped to start a small paper on the campus of Arizona State University in Phoenix. The online classifieds were an attempt to compete with Craigslist, whose explosive growth as a classified-advertising hub was in the process of turning the newspaper industry on its ear. The pair sold the chain of weeklies in 2012 but continued to own Backpage until 2015, when they sold their interest in the site to Ferrer, who remained as CEO.

Over the past decade, state and federal courts alike have affirmed Section 230’s explicit protections as they apply to Backpage’s now-shuttered “adult” section, in which users paid to advertise body rubs, stripteases, escort services, and other generally legal activities that prosecutors contend were thinly veiled come-ons for acts of prostitution. Just as Section 230 shields Twitter from being held responsible in the event that a user posts libelous content and prevents Facebook from being prosecuted if the social network is exploited by a cyberstalker, the law places criminal and civil liability on the shoulders of the malefactor, not the medium.

But that didn’t stop then-California Attorney General Kamala Harris from having Lacey, Larkin, and Ferrer arrested for pimping this past October and paraded into a Sacramento courtroom in shackles and prison-orange jumpsuits. Over Harris’s objections, the trio was released on bond, with Lacey and Larkin posting $250,000 apiece and Ferrer ponying up $500,000.

On December 9, 2016, Judge Michael Bowman threw out Harris’s case, ruling that Section 230 provides “a foreclosure to prosecution,” and that advertisers’ payments to Backpage qualify as “services rendered.”

In the interim, Harris had been elected to the U.S. Senate. But the California Attorney General’s office, now headed by Xavier Becerra, promptly refiled the pimping charges, this time tacking on the allegations of financial wrongdoing.

Speaking to reporters outside the courtroom on Wednesday, the lead prosecutor in the case, Supervising Deputy Attorney General Maggy Krell, would say only that her office looks forward to proving its case in court.

But Becerra issued a press release declaring “victory” and promising that the California Attorney General’s office will “vigorously prosecute this case.”

Omitting any mention of the judge’s dismissal of the 15 pimping counts, the release characterizes Backpage as “a multimillion-dollar online sex trafficking hub” and quotes Becerra describing the case as “a vile story: vulnerable teenagers are exploited online and lured into becoming victims of sex trafficking.”

Backpage closed down its “adult” section in early January, on the eve of a hearing convened by the U.S. Senate’s Permanent Subcommittee on Investigations. (Subpoenaed to attend the hearing, Lacey, Larkin, and other Backpage executives including Ferrer refused to testify, invoking their rights under the First and Fifth amendments to the U.S. Constitution.) Subcommittee members claimed Backpage’s current and former owners knowingly accepted ads that involved sex trafficking, citing editorial decisions of the sort that state and federal courts have repeatedly deemed legitimate under Section 230. The subcommittee also called on U.S. Attorney General Jeff Sessions to investigate Backpage, based on its findings.

And the U.S. Attorney’s Office in Phoenix reportedly has empaneled a grand jury to look into Backpage. (Because grand-jury proceedings are secret, the status of any such investigation is unknown.)

Asked if he was concerned by reports of a grand jury, Lacey responded with a shrug.

“A friend recently said that over the decades he’s known me, a badge of some sort was always trying to jail me,” he explained. “That’s not so bad for an Irishman.”