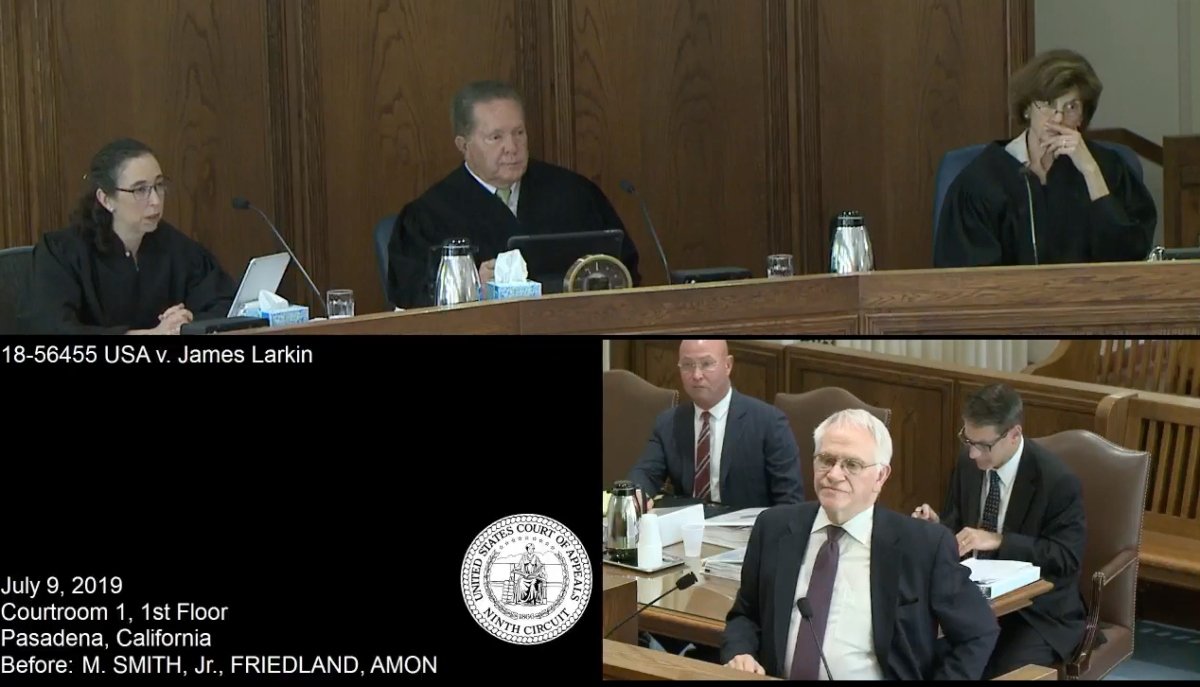 Procedural issues, rather than the First Amendment, dominated a hearing in federal court in Pasadena, Calif. on the U.S. government's seizure of millions from the former owners of Backpage.

During a 30-minute hearing in Pasadena, Calif., on Tuesday, July 9, a three-judge panel of the Ninth Circuit Court of Appeals signaled that it would likely send a case involving the seizure of millions of dollars in publishing assets from Michael Lacey and Jim Larkin, the former owners of Backpage.com, back to a lower court for further review.

The subject of the hearing concerned Lacey and Larkin’s appeal of an October 2018 stay from a district court judge in California, which effectively halted their First Amendment challenge to the seizure warrants in the case.

Arguing for the defendants, attorney Robert Corn-Revere asserted that the appeal presented “a pure case of First Amendment law,” which he described as, “whether the government can seize the proceeds of publishing before a judicial determination of guilt.”

That’s precisely what the U.S. Department of Justice has done in this case. From the defendants’ indictment in March 2018, prosecutors have engaged in a series of seizures of bank accounts, property, jewelry, cars, you name it, in an effort to choke the defense at its weakest point — its pocketbook.

Underlying the constitutional objections to these seizures is an attempt to free money from the feds’ grip in order to pay the massive legal fees associated with the defense of Lacey, Larkin and their co-defendants, who stand accused of 100 counts of promoting prostitution across state lines, money laundering and conspiracy — mind boggling charges that seek to hold Lacey, Larkin, et al. responsible for the acts of third-parties who posted adult ads on Backpage.

In the appeal brief, defense attorneys argue that, according to U.S. Supreme Court precedents, proceeds derived from expressive materials, such as a website like Backpage, cannot be seized, pre-conviction, without at least a prompt adversarial hearing. So, they contend, the judges should cancel the stay and send the case back to the district court with instructions to vacate the seizure warrants.

Almost from jump in the hearing, the judges on the panel questioned Corn-Revere as to whether they needed the lower court to do some further “fact finding.”

“All I know is that if we can’t get a favorable ruling on our First Amendment rights, Dickens’ Bleak House will be more relevant than ever.” — Michael Lacey

Judge Michelle Friedland asked Corn-Revere if the court would have to know if the seized proceeds were from illegal activity in order to rule on the First Amendment claims. Because, as the government argued in its brief, speech soliciting a crime would not merit First Amendment protection.

“That’s the ultimate question of trial,” Corn-Revere replied. “What [prosecutors are] doing is assuming their conclusion, then claiming that they can do the seizure.”

A Wiseguy and a Government Concession

Corn-Revere argued that these warrants were improper and invalid, in part because of U.S. Supreme Court precedents in cases such as Fort Wayne Books, Inc. v. Indiana and Simon and Schuster v. Members of the New York Crime Victims Board.

In the former, the high court ruled in 1989 that the seizure of an entire adult bookstore and its contents was a First Amendment violation.

In the latter, from 1991, SCOTUS overturned New York state’s “Son of Sam” statute, which required that profits derived from the reminiscences of criminal activity in memoirs, films, etc., must be turned over to the state and held in escrow for five years, in case any victims come forward to sue the storyteller and win. The law was inconsistent with the First Amendment, said SCOTUS.

Corn-Revere said these cases applied to the defendants’ appeal, and that seizing assets derived from the publishing of an interactive website like Backpage, at least without an adversarial hearing, would similarly be a constitutional violation.

But prosecutors have been doing their damnedest till recently to block any such hearing on their warrants, some of which are now more than a year old.

First, they made the process more difficult by seeking the seizure warrants in the Central District of California, as opposed to Arizona, where the criminal case is proceeding.

“[T]his does present a fundamental First Amendment question of whether or not the government can do an ex parte seizure of a publisher’s assets, simply by alleging that the publishing is illegal.” — Robert Corn-Revere

Later, the feds moved, ex parte, for a stay of proceedings in the Central District of California, which federal Judge R. Gary Klausner granted.

When the defense tried to raise objections in the Arizona court, where Klausner and the feds’ said they should, the federal judge in the Arizona criminal case at the time refused to involve himself in warrants issued from another district, a position suggested by prosecutors.

Ironically, not long after the Ninth Circuit took the case and set oral arguments, the U.S. Attorneys’ Office decided that, by golly, they had been wrong all along. The defendants really were due a hearing before Judge Klausner. Thus, prosecutors wanted the Ninth to return the case back to Klausner and forget about the whole thing.

Arguing for the government at the hearing, Assistant U.S. Attorney Peter Kozinets told the panel that the feds were through playing dodge ball with the issue.

“We all agree the stay was prematurely granted,” Kozinets told the court. Kozinets then requested a “limited remand” back to the district court, where the defendants could raise objections to the probable cause affidavits, which were the basis for the warrants.

At the same time, Kozinets also argued that the court had no jurisdiction over the issue, a conundrum that the judges had fun with, pointing out that they needed jurisdiction to send the case back.

“How does that work?” cracked Judge Milan Smith. “Mini-jurisdiction or something?”

“In any event,” she asked Kozinets, “it’s your position now that [the defense] should be able to go back and make all of these arguments, correct?”

“Well, not all of these arguments,” he replied. “We’ve outlined in our motion for limited remand the parameters of our proposed remand, which would allow them to bring a ‘Franks’ objection…”

Kozinets was referring to objections based on the 1978 Supreme Court case Franks v. Delaware, which addresses intentionally false statements by law enforcement officials in an affidavit for a search warrant. Under certain circumstances, a Franks objection could lead to the exclusion of evidence from that warrant as “fruit of the poison tree.”

Judge Smith pressed Kozinets, saying that based on Kozinets’ arguments, it sounded like, “you no longer contest our jurisdiction,” since Kozinets desired a limited remand.

“But if we can do it for that, we can send it back more openly, for something else, is that correct?” Smith asked, adding, “Bottom line is: our panel should no longer be concerned about jurisdictional issues, as far as you’re concerned?”

Kozinets reluctantly agreed that was the case, “with respect to the review of this stay order.”

By the end of the hearing, as Corn-Revere approached the podium to rebut Kozinets’ argument, the judges were wondering if they had to do anything. Why, they could just dismiss the case, the effect would be the same, wouldn’t it?

“Well, is there anything for us to do?” Judge Smith asked Corn-Revere.

“I think so,” Corn-Revere replied. “Because this does present a fundamental First Amendment question of whether or not the government can do an ex parte seizure of a publisher’s assets, simply by alleging that the publishing is illegal.”

Judge Friedland interjected that the government had essentially conceded the argument about having a hearing to hash out the facts as to whether the First Amendment might apply. The lower court could do that work, she said.

“But the very premise of the seizures was the idea, the claim that they are publishing assets,” Corn-Revere said. “So we start from the same premise. The question is whether or not they can simply justify the seizure based on the allegation.”

Indeed, the First Amendment harm in this case has been severe. It has lasted for more than a year, and now seems almost certain to last longer.

And it’s not just the First Amendment that’s at stake. Other constitutional rights are being fought over as well in this case, like the Fourth Amendment right against unreasonable search and seizure, and the Sixth Amendment right to have a lawyer of one’s choosing.

Specifically, when it comes to the Sixth Amendment right to counsel, the feds’ pretrial seizure of assets has been devastating to the defendants. Their attorneys are struggling to review the more than 10 million documents and hundreds of terabytes of data without the necessary funds.

The government also has seized some bank accounts set up in advance by the defendants to pay for legal fees. This forced private attorneys for two of the defendants, former Backpage employees Joye Vaught and Andrew Padilla, to withdraw from the case.

As a result, the court recently appointed two replacement attorneys to represent Padilla and Vaught at the taxpayers’ expense. According to court filings, Padilla has been approached by the government with plea deals and refused them.

Obviously, the seizure of these attorney accounts is the government’s way of putting the squeeze on the defendants. This is true of the seizures in general. How do you make a fortress capitulate to a hostile force? Deprive it of resources, natch.

Asked by Front Page Confidential about the hearing and his predicament, Lacey, the erstwhile alt-media baron, seemed resigned at the prospect of a longer battle ahead.

“All I know is that if we can’t get a favorable ruling on our First Amendment rights, Dickens’ Bleak House will be more relevant than ever,” he said.

For more on the run up to the hearing, read:
Ninth Circuit Hears First Amendment Challenge to Feds’ Seizure of Millions from Backpage’s Former Owners