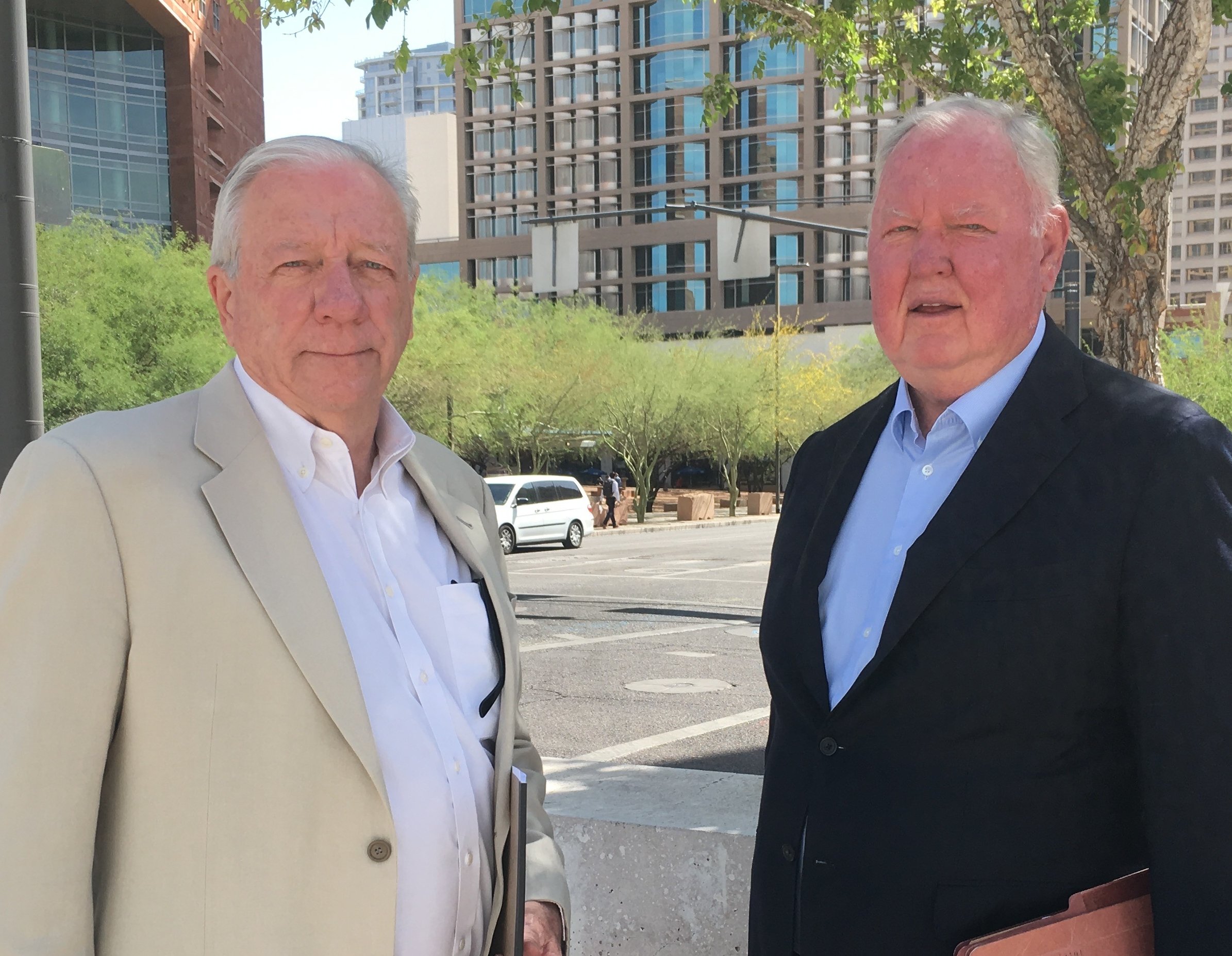 Federal prosecutors lose another attempt to halt a First Amendment review of their unconstitutional seizure of millions of dollars in publishing assets from Michael Lacey and Jim Larkin.

On March 30, the Ninth Circuit Court of Appeals dealt federal prosecutors yet another setback in the government’s two-year-long quest to hold onto millions of dollars in publishing assets belonging to veteran newspapermen Michael Lacey and Jim Larkin, former owners of the 17-paper Village Voice Media chain of alt-weeklies and co-founders of the now-defunct online listings giant, Backpage.com.

Assistant U.S. Attorney John Kucera had sought to block a First Amendment challenge by Lacey and Larkin to the seizures, lamely arguing — much as he had a year ago in a similar legal maneuver — that the appellate court lacked jurisdiction to hear the case.

But a two-judge panel of the Ninth rejected Kucera’s motion to dismiss, while allowing him to renew those arguments in his upcoming brief on the First Amendment issues before the court, should he choose to waste limited page space on them.

Meanwhile, the same judges granted Lacey and Larkin’s request to expedite their appeal, warning the government that no requests for extensions of time would be approved “absent extraordinary and compelling circumstances.”

With an April 28 deadline set for the government’s response, and an optional reply from the appellants due 21 days thereafter, oral arguments concerning the civil asset seizures could be scheduled as early as June. That promises to be a showdown of operatic proportions, one Kucera and his fellow government attorneys have been avoiding ever since they seized all of Lacey and Larkin’s assets from a total of 89 bank accounts beginning in late March 2018, using warrants out of the Central District of California.

‘With the seized monies, it’s been nothing but gamesmanship from the beginning. They’re doing everything they can to legally starve the defendants.’ — Michael Piccarreta, former president of the Arizona State Bar

The seizures were orchestrated to coincide with Lacey and Larkin’s arrests by federal agents on April 6 in Phoenix, Arizona, on 100 counts of money laundering, conspiracy and the facilitation of prostitution across state lines in violation of the U.S. Travel Act.  Though Lacey and Larkin sold Backpage in 2015, the U.S. Department of Justice wants to hold them responsible for adult ads posted to Backpage by the site’s users — ads that the feds claim were overt come-ons for illicit sex acts.

Once the second largest online classifieds site after Craigslist.org, Backpage won numerous battles in state and federal court over the years upholding its First Amendment right to publish a vast array of Constitutionally-protected, third-party advertising: everything from car sales and apartment rentals to personal ads and listings for legal adult services, such as striptease, escorts, dominatrixes and the like.

The feds insist Backpage was an illegal enterprise and therefore deserved no First Amendment shield, allowing the government to seize and remove the website from the internet on the same day the FBI pinched Lacey and Larkin. The federal government uses the same logic to rationalize its seizure of millions of dollars in assets, much of it coming from business ventures that preceded and had nothing to do with Backpage.

It’s a point that Lacey and Larkin’s First Amendment attorneys Jim Grant and Robert Corn-Revere make at length in the appellants’ opening brief to the Ninth.

“The government may not restrain or punish publication of speech absent proof of illegality — mere allegations or probable cause are not enough,” the attorneys write.

ONCE MORE UNTO THE BREECH

Specifically, Lacey and Larkin’s appeal before the Ninth challenges a December 2019 decision by U.S. District Court Judge R. Gary Klausner, who found in favor of the government’s position, ruling that “the assets in question do not merit special protection under the First Amendment.”

Klausner wrote that the seized assets were alleged by the government to be the result of illegal activity, and since “commercial speech related to illegal activity is not protected under the First Amendment,” the issue need not be addressed under the “heightened standard” that 1A jurisprudence normally requires. Nor was a special hearing necessary to investigate the litigants’ claims, the judge ruled.

Lacey and Larkin appealed Klausner’s ruling almost immediately, seeking relief from the Ninth Circuit for the second time since the government seized the monies via warrants from federal magistrates in Los Angeles.

The two men first challenged the seizures in Klausner’s court on August 1, 2018, but the feds sought a stay, ex parte (meaning, without the involvement of Lacey and Larkin’s counsel), which Klausner granted on October 23, 2018. Klausner stated that he saw “no reason why movants’ pending motions could not be brought in the criminal action,” meaning the criminal case in Phoenix. But the federal court in Phoenix declined to get involved in warrants issued by another court.

‘The goal  is to tie up the money till the trial’s done,’ says Piccarreta. ‘Then at that point, whether the defendants get it back or not, they haven’t used it to defend themselves.’

Lacey and Larkin then appealed Klausner’s 2018 decision on First Amendment grounds, and the Assistant US Attorney leading the charge on the seizures, John Kucera, initially argued that the Ninth Circuit should dismiss the case for a lack of standing.

Kucera’s gambit didn’t fare him well the first time around either. When it became apparent that the Ninth Circuit would hear oral arguments on the case last year, Kucera changed tack and filed a brief admitting that, yes, Lacey and Larkin deserved a ruling on the First Amendment issues. He asked for a “limited remand” back to Klausner’s court for this purpose.

A three-judge panel of the Ninth Circuit rejected the “limited” part, lifted the stay and sent the case back to Klausner for further proceedings. Klausner took additional briefings from both sides, and ruled in favor of the government, without holding an adversarial hearing on the matter.

Tucson defense attorney Michael Piccarreta, a former president of the State Bar of Arizona, believes that from the beginning the federal government’s machinations were intended to delay the process and leave the defendants without financial resources.

“The more of the clock they can chew up without the defendants having the adequate funds to defend themselves, they get more of a tactical advantage,” Piccarreta told FPC. “The last thing they want is a hearing on the merits.”

Piccarreta represented one of Lacey and Larkin’s co-defendants, from January 2017 till May 2, 2019, when he and another private lawyer were forced to withdraw from the case after the government seized bank accounts that had been set up to cover the legal defenses of Backpage employees.

Though Piccarreta had been made to believe the feds would not seize such accounts, the U.S. Justice Department eventually did, taking possession of bank accounts for his client and some of the others. Two affected defendants were later assigned federal public defenders. (A more detailed timeline of the government’s shenanigans can be found in a motion Piccarreta filed with the court a couple of months before he had to drop out of the case.)

“With the seized monies, it’s been nothing but gamesmanship from the beginning,” Piccarreta says of the federal prosecutors involved. “They’re doing everything they can to legally starve the defendants.”

Piccarreta compared the prosecution’s actions in the case to that of a military campaign, “opening up multiple fronts,” and seizing assets via federal courts in California as the criminal case advanced in Arizona.

“The goal is to tie up the money till the trial’s done,” says Piccarreta. “Then at that point, whether the defendants get it back or not, they haven’t used it to defend themselves.”

‘The government seized millions in appellants’ profits from publishing Backpage.com and from publishing more than a dozen newspapers that are completely unrelated to the website . . . based on nothing more than allegations that the profits came from illegal activity.’ — Tassity Johnson, co-author of an amicus brief from the Cato Institute, Reason Foundation and DKT Liberty Project

Piccarreta says prosecutors in the Lacey and Larkin case “have not only pushed the envelope, they’ve shredded the envelope,” and will continue to do so until the courts do something to check them.

Indeed, the courts may have that opportunity as a result of a hearing into the merits of case’s First Amendment implications, like the one the Ninth Circuit will soon hear.

FREE SPEECH AND THE SON OF SAM

It’s not difficult to imagine the harm to freedom of speech and freedom of the press that would unfold if the government could take possession of a publication’s monies simply by accusing it of unlawful speech.

Grant and Corn-Revere’s opening brief offers several examples of speech that is not protected under the First Amendment, such as obscenity, defamation, fraud, incitement to violence and “speech integral to criminal conduct.”

But asset seizures, which are themselves a troubling example of the government’s abuse of power, require no more than probable cause, the same standard as an arrest. After the government seizes property or monies on the suspicion that they are involved in illegal activity, the owner must go to court to attempt to recover the wrongly seized assets.

The rules are different, however, when it comes to speech, and the opening brief cites U.S. Supreme Court cases to this effect, such as a 1989 decision in Fort Wayne Books, Inc. v. Indiana and a 1991 ruling in Simon and Schuster v. Members of the New York Crime Victims Board.

In the former, the high court ruled in that the seizure of an entire adult bookstore and its contents was a First Amendment violation.

In the latter, SCOTUS overturned New York state’s “Son of Sam” statute, which required that profits derived from the reminiscences of criminal activity in memoirs, films, etc. must be turned over to the state and held in escrow for five years, in case any crime victims sue and win.

What the government has done in the Lacey and Larkin case turns the First Amendment on its head, the brief argues. If allowed to stand, it would give the government an end-run around free speech protections.

For example, in the case of the Oscar-winning, 1979 German film, The Tin Drum, which some accused of obscenity at the time due to a controversial sex scene, the government hypothetically could have seized all of its proceeds based on that accusation, if the same legal theories applied.

Similarly, with the Pentagon Papers, the Nixon administration could have punished The Washington Post and The New York Times for printing classified information by seizing the assets of each paper’s publisher. Or in civil rights cases where the NAACP was wrongly accused of incitement, a Southern state might be allowed to bankrupt the organization.

Washington, DC-based attorney Tassity Johnson is one of the authors of an amicus brief filed on behalf of three organizations — the Cato Institute, the Reason Foundation and the DKT Liberty Project — in support of Lacey and Larkin’s Ninth Circuit motion.

In an interview with Front Page Confidential, Johnson explained that the three amici “fundamentally believe that the First Amendment protection of free speech extends to what a person can earn from speaking.”

Johnson said the Constitution demands more — at the very least, an adversarial hearing on whether or not the speech is 1A-protected.

“The government hasn’t done that here,” she said. “That’s why this case is on appeal.”