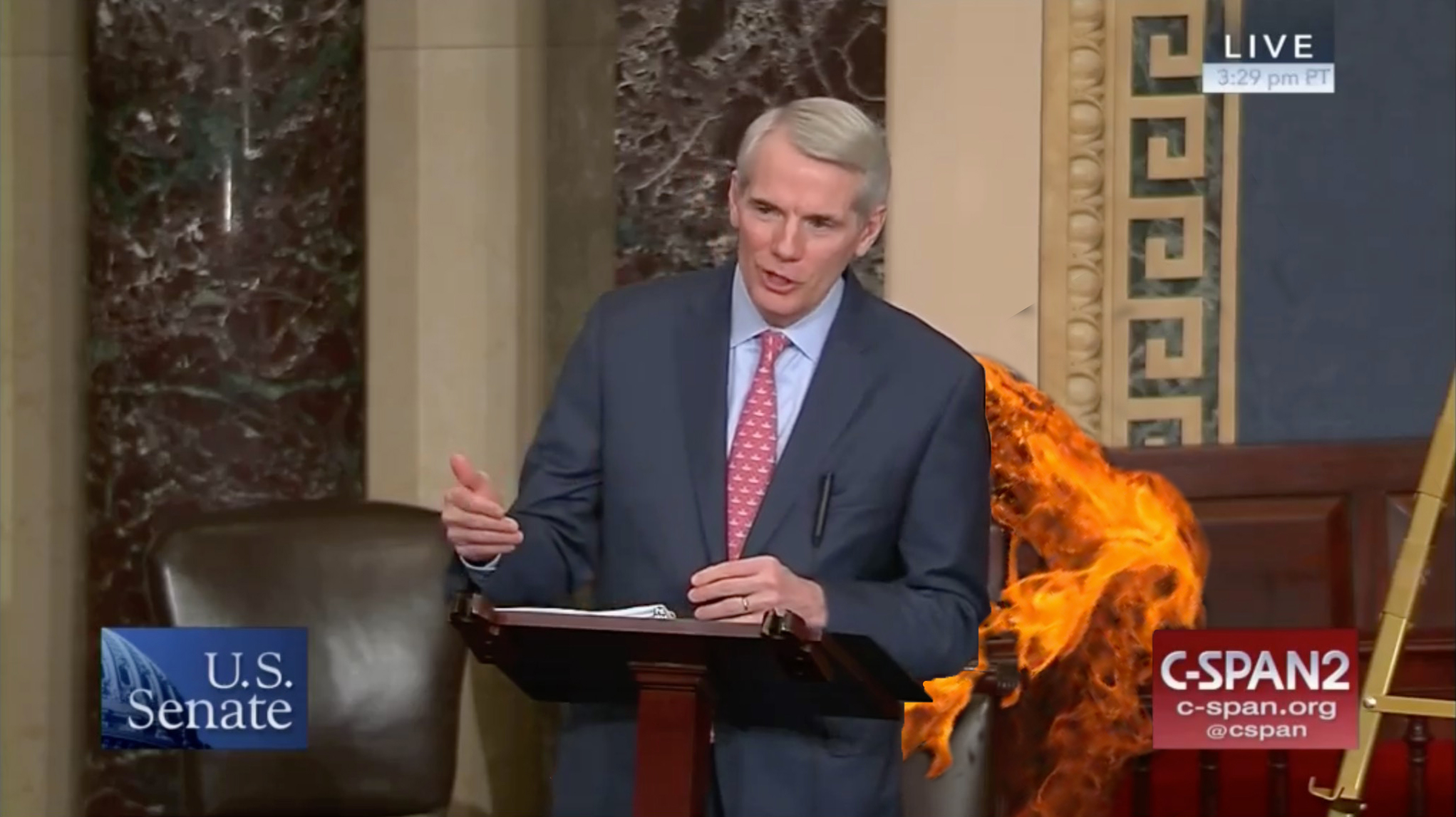 U.S. Sen. Rob Portman spreads falsehoods on the Senate floor as an unconstitutional version of the FOSTA anti-sex-trafficking bill speeds toward a vote in Congress' upper chamber

UPDATE: On Wednesday afternoon the U.S. Senate passed FOSTA Frankenstein 97 to 2. Oregon Senator Ron Wyden was the only senator to speak in opposition to the bill. The Senate overwhelmingly voted down his amendment to allocate funding for sex trafficking prosecutions. As a result, Wyden withdrew his amendment addressing Section 230’s safe harbor section. A full blog post on the day’s events is forthcoming.

Fire practically leapt from U.S. Sen. Rob Portman’s trousers on Monday night on the Senate floor, as the Ohio Republican launched into a long, propaganda-filled monologue on behalf of the Fight Online Sex Trafficking Act (FOSTA) — or, as it’s better known in the tech community, “FOSTA Frankenstein” — which the Senate might vote on as early as Wednesday.

Granted, no flames were visibly emanating from Portman’s pants as he regaled his C-SPAN audience (the chamber itself was nearly empty) with prevarications regarding the supposed epidemic of sex trafficking that is sweeping the nation.

Perhaps his slacks were fire retardant.

Even then they should have been a raging inferno, given the ginormous falsehood that dropped from his cakehole right off the bat.

“This issue of trafficking human beings is something the Senate must stand up against,” said he. “Particularly because there is a Federal law that now permits trafficking online that otherwise would be considered a criminal act.” (Emphasis added.)

Portman straight up stood before Congress & claimed that federal law affirmatively permits online sex trafficking of children. And no one batted an eye! ?

The always perspicacious Elizabeth Nolan Brown, associate editor of Reason magazine, was the first to call out Portman’s statement as hooey in a couple of incredulous tweets, labeling it a “whopper” and expressing amazement at the senator’s “audacity.”

“Portman straight up stood before Congress & claimed that federal law affirmatively permits online sex trafficking of children,” Nolan Brown wrote. “And no one batted an eye! ?”

Not only are there federal laws against human trafficking, but the U.S. criminal code devotes an entire chapter to it.

Portman, though, was referring to Section 230 of the Communications Decency Act of 1996, which makes no mention whatsoever of sex trafficking.

And where it could (under the right circumstances) pertain to sex trafficking, Section 230 pretty much comes right out and says it’s a no-no.

Under the boldfaced heading, “No effect under federal law,” the statute reads states that “[n]othing in this section shall be construed to impair the enforcement of section 223 or 231 of this title, chapter 71 (relating to obscenity) or 110 (relating to sexual exploitation of children) of title 18, or any other Federal criminal statute.”

Doesn’t get much plainer than that.

What Section 230 does explicitly say: that interactive online platforms are not liable for content that users post on them. And FOSTA seeks to carve out exceptions to that protection in cases of ads that promote prostitution among consensual adults or that facilitate sex trafficking.

Prostitution and sex trafficking are not the same thing, by the way. Federal law defines “sex trafficking” as involving minors in commercial sex, or inducing adults into any type of sex work via force, fraud, or coercion. Prostitution, meanwhile, is more like this.

Speaking on the Senate floor on Monday, Portman appeared to be allergic to the truth.

He quoted statistics regarding the number of reports of trafficking that are made to the National Human Trafficking Hotline (NHTH).

In his home state of Ohio, Portman said, “371 cases of human trafficking were reported to the hotlines [in 2017].” (Emphasis added.)

The NHTH cites 365 human-trafficking cases in 2017, but Portman may be working from revised numbers.

A tip is not the same as a case, not by a long shot.

Though the FBI has yet to release its full report on U.S. crime in 2017, the NHTH’s 2016 numbers for Ohio provide a basis for comparison. That year, NHTH reported 375 human trafficking cases in Ohio. And according to FBI statistics, 2016 saw precisely one case of human trafficking in Ohio that involved a commercial sex act. (That case was not closed.)

Of course, even FBI data isn’t perfect. Portions of Ohio, for instance, don’t report crimes to the FBI. But it seems unlikely that the ratio of NHTH “cases” to FBI “cases” would be hugely divergent from the 2017 fraction of 1 to 365.

Incidentally, Elizabeth Nolan Brown  has performed this kind of calculation before.

When she crunched the 2016 FBI data, she concluded that there was “little to support the idea that the U.S. is experiencing unprecedented levels of labor and sex trafficking or that we are in the midst of some sort of ‘modern slavery’ epidemic.”

But you can’t pass a law like FOSTA without some hysteria, and to generate that level of panic, the FBI stats obviously won’t do. That’s why, as Nolan Brown points out, no one ever mentions them during discussions or debates on the issue.

Meanwhile, FOSTA seems unstoppable in the Senate. On Monday, Senators overwhelmingly voted to limit debate on the bill, 94 yeas to 2 nays. The two “no” votes came from Kentucky Sen. Rand Paul, a libertarian-minded Republican, and Sen. Ron Wyden of Ohio, a Democrat who co-authored Section 230 back in 1996 and has been an ardent foe of attempts to nullify it.

On Tuesday Wyden formally submitted two amendments to FOSTA, one of which may help fix some troubling elements of the bill. His office tells Front Page Confidential that the senator is expected to speak about FOSTA on the Senate floor on Wednesday.

And for further reading, here’s Mike Masnick addressing some FOSTA-related falsehoods on Techdirt: