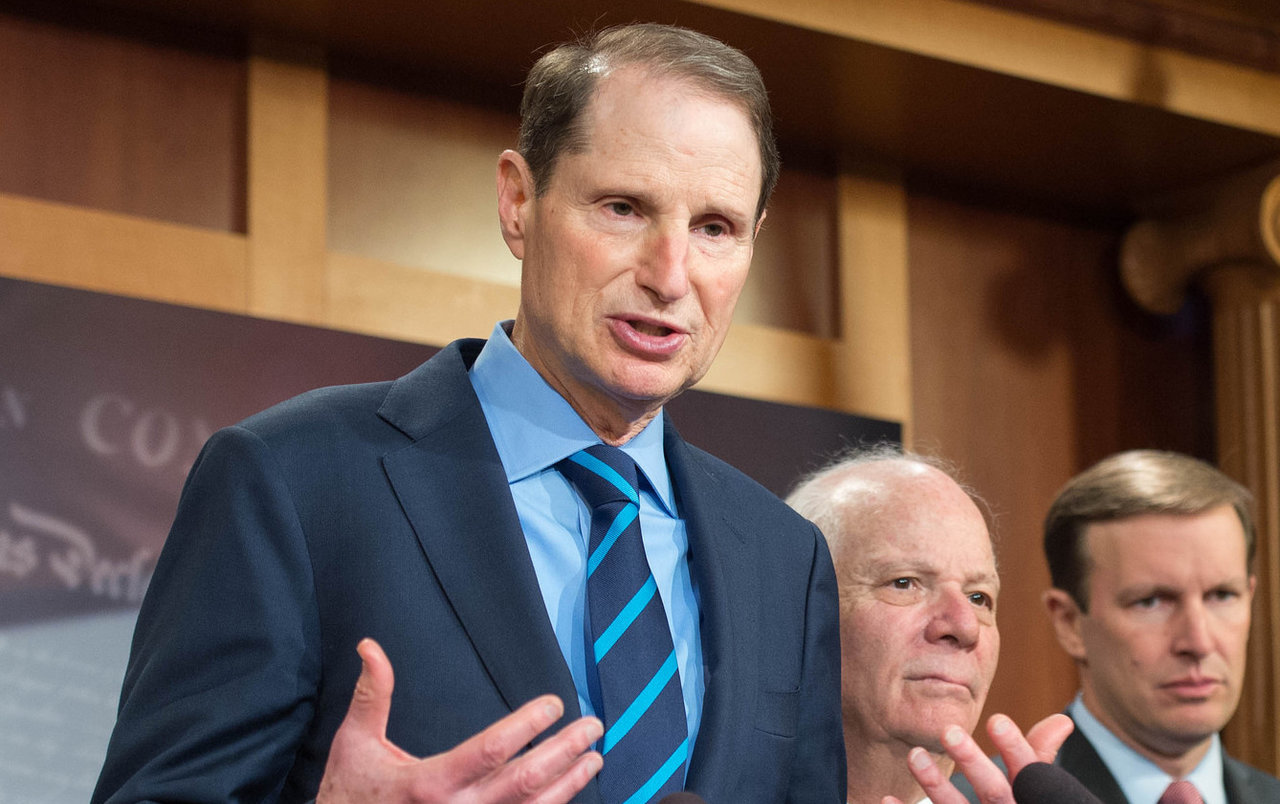 U.S. Sen. Ron Wyden, shown here at a 2016 press conference, remains a passionate defender of Section 230 and a tireless foe of FOSTA/SESTA (via Senate Democrats/Flickr)

Oregon Democrat Ron Wyden has placed a "hold" on SESTA in the U.S. Senate. Can his parliamentary maneuver save Section 230?

When it comes to the Stop Enabling Sex Traffickers Act of 2017 (SESTA), will U.S. Senator Ron Wyden be the internet’s Little Dutch Boy, saving the day by plugging a leaky legislative dike?

Or will Wyden’s latest efforts against the bill amount to a “speed bump” for SESTA, as one tech maven puts it?

Such are the questions arising from the Oregon Democrat’s legislative “hold” on the bill, a parliamentary procedure that prevents the U.S. Senate from passing SESTA by unanimous consent.

Wyden placed SESTA on hold last week after the Senate Commerce, Science, and Transportation Committee unanimously approved an amended version of the bill.

The hold carries the implied threat of a filibuster. But it can be overridden by a vote of 60 senators, otherwise known as “cloture.”

In a November 8 press release announcing the move, Wyden echoed many of SESTA’s critics, arguing that the bill will make it harder to track down and arrest actual sex traffickers. Additionally, SESTA favors “big tech companies at the expense of startups,” he asserted.

Wyden’s announcement reads like an indictment of the powerful Internet Association, which represents tech goliaths Google, Facebook, Twitter, and Amazon. In advance of last week’s Commerce Committee vote, the trade group dropped its opposition to the bill and endorsed the modified language, much to the chagrin of online activists.

If it becomes law, SESTA threatens a sea change to the internet’s so-called Golden Rule, which holds interactive websites blameless for content that users post. Internet fat cats figure they can weather that change. Smaller sites that lack the resources to police third-party content, however, may suffer or go under.

Taking up for the little guy, Wyden addressed this disparity, poking the tech potentates in their virtual peepers.

“After 25 years…, I’ve learned that just because a big technology company says something is good, doesn’t mean it’s good for the internet or innovation,” he stated. “Most innovation in the digital economy comes from the startups and small firms, the same innovators who will be harmed or locked out of the market by this bill.”

The senator thanked colleagues for narrowing the scope of SESTA in the amended version. But even an amended SESTA “makes inadvisable changes to bedrock internet law,” he observed.

The Beaver State pol ought to know — he carries the equivalent of a third-degree black belt in all things tech.

Section 230 also created a safe-harbor provision that allows interactive websites to remove offensive content without fear that doing so could later be used as evidence of what lawyers call scienter, or knowledge of a crime.

When the Senate Commerce Committee first heard the bill in September, Wyden testified against it, lecturing his skeptical colleagues on Section 230’s successes as they listened stone-faced to his fly-in-the-ointment broadsides.

Senator Wyden testifying at the Senate SESTA hearing in September

Section 230 fostered $1 trillion in economic activity, he told them, giving plucky startups a shot in the then-emerging marketplace and letting free speech and innovation proliferate without government meddling.

Wyden summed up the dilemma he and others in Congress faced at the time:

“The key question, Mr. Chairman and colleagues, was: Would there be an internet dominated by private networks, with the worst impulses of human beings, going on in impenetrable dark corners, or would the internet be a platform open to the world, where such impulses would be exposed to sunlight and the law?”

So far Wyden’s arguments have made little dent in SESTA’s popularity. The bill boasts 46 co-sponsors in the Senate, as politicians ride a nationwide wave of hysteria over “sex trafficking.”

Wyden took action “in hopes that the Senate will rethink an approach that will make it harder to catch dangerous criminals, will favor big tech companies at the expense of startups, and will stifle innovation,” says a spokesman.

Does the senator believe he can halt the juggernaut?

Wyden spokesman Keith Chu tells Front Page Confidential via email that the senator placed the hold “in hopes that the Senate will rethink an approach that will make it harder to catch dangerous criminals, will favor big tech companies at the expense of startups, and will stifle innovation.”

Chu did not address whether Wyden would force the issue with more serious legislative tactics, such as a filibuster.

Regarding the ever-growing list of co-sponsors, Chu points out that this isn’t Wyden’s first rodeo. The senator placed holds on the Combating Online Infringement and Counterfeits Act (COICA) in 2010 and the PROTECT IP Act (PIPA) in 2011, “despite the fact both bills had large numbers of cosponsors.”

Significantly, those bills never went to a vote of the full Senate.

In praising Wyden’s recent SESTA hold, Techdirt’s Mike Masnick referenced the senator’s clout in the demise of COICA and PIPA.

“As with SESTA, COICA was seen as an ‘easy’ win for Congress and passed out of committee with a unanimous vote,” Masnick writes. “Wyden put a public hold on it and forced senators to go back to the drawing board — and eventually the entire bill was killed.”

But Eric Goldman, the Santa Clara University School of Law professor whose Technology and Marketing Law Blog is a must-read for the tech-savvy, downplayed the possibility that Wyden’s SESTA hold might be a mortal blow.

In an email exchange with Front Page Confidential, Goldman noted that COICA, PIPA, and the equally flawed Stop Online Pirating ACT of 2011 (SOPA) met with far more opposition from the tech industry as a whole.

Goldman acknowledges that Wyden’s holds on COICA and PIPA “played a huge role in slowing down the legislation long enough for Congress to see the error of its ways.” But in those instances, the bills’ foes launched massive telephone campaigns aimed at killing the legislation. Now that the Internet Association has “flipped” on SESTA, he contends that a similar effort appears unlikely.

Additionally, SOPA and PIPA “eventually got spun” as censorship bills that posed existential threats to the internet, while SESTA’s proponents are selling the bill “as an effort to protect sex-trafficking victims,” Goldman notes.

“The hold is like a speed bump,” he writes in one email. “It slows down the Senate. However, it can be overcome, especially if the senator placing the hold doesn’t have the votes behind it.”

Notably, Goldman has been far ahead of the curve on current events.

When he analyzed the new and improved SESTA in early November, he anticipated that Wyden would place a hold on the bill, perhaps forcing Senate Majority Leader Mitch McConnell to allocate precious floor time for the bill.

“The open question is how Senator McConnell will maneuver around the hold,” Goldman observes.

McConnell’s communications director David Popp offered no comment on Wyden’s hold when Front Page Confidential reached out to him. Popp would only say that he has no scheduling announcements regarding the bill.

But even if Wyden’s hold goes down as a last-ditch, rearguard action, it will be far more than the Internet Association did to protect a legal framework that has made its members prosperous in the extreme.