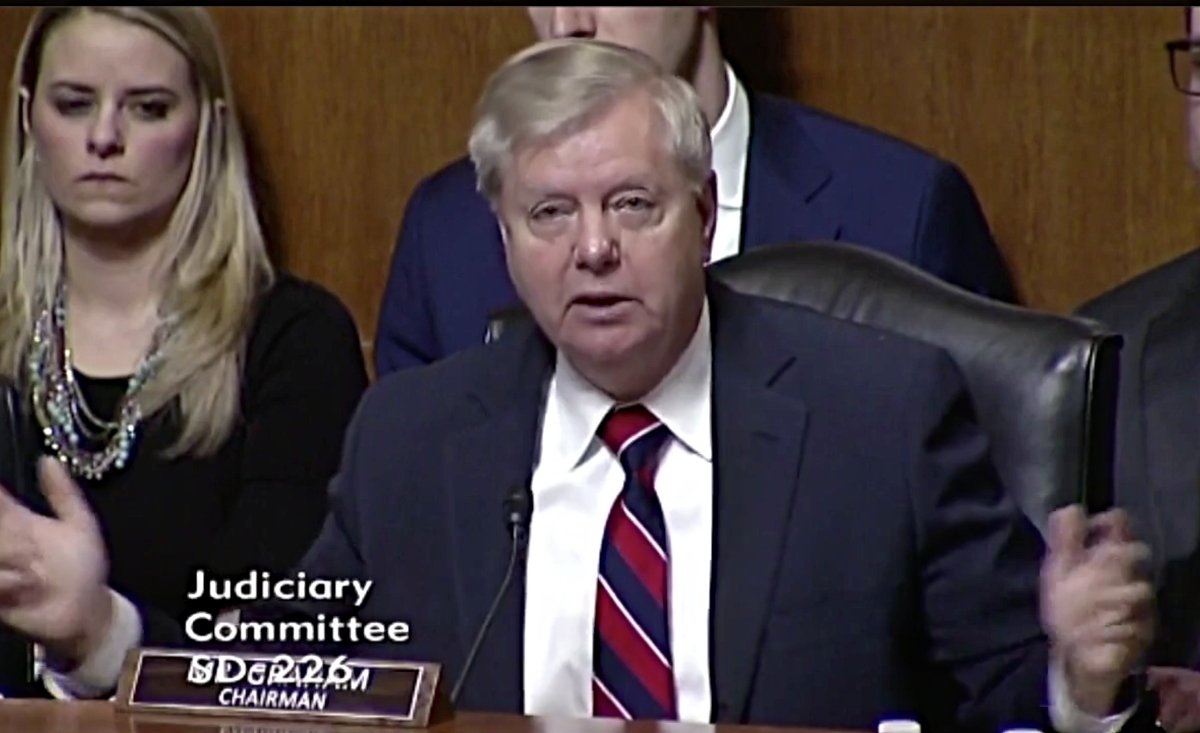 A recent U.S. Senate Judiciary Committee hearing on the EARN IT Act ignored free speech concerns in a rush to censor the internet and undermine encryption.

During a two-hour hearing held on March 11 in the U.S. Senate Judiciary Committee on pro-censorship, encryption-busting legislation known as the Eliminating Abusive and Rampant Neglect of Interactive Technologies Act (EARN IT Act), there was no real discussion of the First Amendment and free speech implications of a proposed law that threatens to radically transform the internet and curb free expression online in unprecedented ways for most Americans.

As envisioned by its main co-sponsors, Republican Senator Lindsey Graham of South Carolina and Democratic Senator Richard Blumenthal of Connecticut, the  bill would create a de facto internet censorship commission, chaired by the U.S. Attorney General and stacked with members of law enforcement, before which all interactive online services would have to kneel in order to “earn” back the limited statutory immunity these services have for content posted by their users.

The commission would have broad latitude to come up with a list of “best practices,” putatively to combat the spread of “child sexual abuse material [CSAM],” aka, child pornography, on the internet.

Legal scholars have noted that CSAM is already illegal and subject to mandated reporting under federal law. Nevertheless, the bill would allow the commission, with congressional approval, to create an open-ended list of requirements that would likely give the feds a backdoor to encryption software and result in the widespread suppression of free speech online.

Which is why so many organizations across the ideological spectrum have joined to oppose this legislation, including the Electronic Frontier Foundation, the ACLU, the CATO Institute and Americans for Prosperity.

And yet, beyond some talk of encryption, there was almost no discussion of the bill’s First Amendment and free speech implications during the March 11 hearing. Which is not a surprise, considering that nearly all those testifying supported the measure.

Elizabeth Banker, deputy general counsel of the powerful Internet Association, which includes big tech companies such as Google and Facebook, was the lone and very submissive voice of dissent.

Most of the time, she had the look of a hostage whose one wrong move might earn her a Moe Greene special. She did have the temerity to mention the First Amendment during her opening statement, albeit in passing.

After warning that the proposed legislation could have the opposite of its intended effect, by forcing private companies to act as “agents of the government” and actively search for contraband online without a warrant, Banker noted: “Similar concerns related to the First Amendment are outlined in my written testimony, and I’d be happy to discuss any of those with the committee.”

Naturally, no one took her up on that offer.

In general, the Internet Association has offered tepid opposition to the bill, issuing a statement on March 5 stating that its members have “very strong concerns” over the EARN IT Act, but that they “look forward to working with Chairman Graham and Senator Blumenthal on a path forward.”

For that cooperative attitude, Banker was slapped around like a $3 piñata by Graham, Blumenthal and their ally in this venture, Republican Senator Josh Hawley of Missouri. The bill, if passed, would suspend platforms’ protections under Section 230 of the 1996 Communications Decency Act, which generally holds interactive computer services harmless from civil liability and state criminal prosecution for what’s known in the industry as “user generated content.”

“If you had a choice between losing your 230 protections or the EARN IT bill, which one would you want? When it comes to child sexual abuse, Ms. Banker,” Graham berated her at one point.

Banker replied, “I don’t think that we need to make a choice in order to protect children.”

Graham got so ornery that he even apologized at one point, kinda-sorta, for being “rude,” before taking another whack at the IA flack.

“Is Section 230 a constitutional right?” he asked.

Banker started to reply, saying that  it, “plays an important role in allowing services.”

“Well, that wasn’t my question,” Graham interrupted, querulously. “Is it a constitutional right? Or is it something Congress gave and can take away if it chooses?”

“It is a law passed by Congress,” she admitted.

“And we can change it if we’d like,” Graham harrumphed.

Section 230 makes the poster of problematic content legally responsible for that content and allows interactive websites to moderate and remove such content with limited consequences. It is, as Reason scribe Elizabeth Nolan Brown once termed it, “the Internet’s First Amendment,” and it has allowed platforms the ability to “scale” free speech online.

Under Graham’s bill, to maintain this Section 230 immunity, computer service providers have to comply with mandates from the new commission, or risk facing endless lawsuits and a patchwork of state criminal codes.

Which is why it’s no choice at all, though the bill’s sponsors insist that compliance is voluntary.

As the ACLU observed in a letter opposing the act, the new law would be a “tool for censorship” that will “chill vast amounts of protected speech online,” by  “undermining the privacy of communications” and by “mandating companies adopt overbroad content censorship and moderation practices.”

Eric Goldman, a Professor of Law at Santa Clara University School of Law, recently noted in his Technology and Marketing Law Blog that some of the “best practices” that could come from the new “Censorship Board,” could include requiring platforms and websites to “obtain, verify, and retain valid contact information for all users,” thus authenticating the ages of all users, including, “the age of anyone depicted in pornography to confirm that they are all above-age.”

“I can’t imagine the potential universe of pernicious regulations that could emerge from the Censorship Board; my mind isn’t that creative or evil. Even so, think about an Internet where your private messages cannot be encrypted (or are subject to a backdoor), every [user-generated content] site authenticates your age and identity, and anything you post that might be potentially sexually suggestive is banned.”

There are geekier issues regarding First Amendment law that were largely untouched during the hearing, though Banker addressed them in her written testimony.

The letter continues, stating, “Despite this clear prohibition, the EARN It Act coerces platforms into censoring speech that will go well beyond illegal CSAM.”

Then there are the free speech concerns over end-to-end encryption, which Attorney General William Barr has made it his mission to crack.

During the hearing, Graham and Blumenthal categorically denied that their bill handed the AG a sledgehammer to break encryption. But each time they did so, they made it painfully obvious that this in fact was their intent.

For instance, Graham praised Facebook as the “gold standard” in reporting CSAM to the government via the National Center for Missing and Exploited Children (NCMEC). He then dissed Facebook’s plans for end-to-end encryption on its messaging services.

“So Facebook is talking about end to end encryption, which means they go blind,” Graham said. “This bill is not about the encryption debate, but the best business practices.”

Again, using Banker as his foil, Blumenthal attempted to shoo the elephant out of the room.

“I’ve been reading in the press that the EARN It Act is a secret trick to ban encryption, a backdoor to a backdoor,” he said, addressing Banker. “This bill says nothing about encryption. Have  you found a word in this bill about encryption?”

The reality is, and Blumenthal knows it, the bill doesn’t have to say anything about encryption. Rather, the bill hands the censorship tribunal a blank check and asks it to fill it in later. Quite ingenious, actually.

However, not all Judiciary Committee members were enthusiastic blank-check writers. In his questioning, Democrat Sen. Patrick Leahy of Vermont actually mentioned “free speech online” as one of the “difficult issues” at hand. He also wondered about language in the bill changing the standard of civil liability for websites from knowledge to recklessness.

“With technology, which is changing by the day, no case law to guide the court, I’m worried that what constitutes recklessness for a tech company is only going to be a guessing game,” he said.

Leahy also brought up a matter Banker had discussed in her opening statement, that under a 10th Circuit Appeals Court decision in U.S. v. Ackerman, websites and platforms, if coerced to follow certain rules, would become arms of the state, much in the same way NCMEC, a quasi-governmental entity, now is.

Potentially, searches for CSAM done by private entities without a warrant could be deemed illegal by courts, and any evidence of criminality thrown out as “fruit of the poison tree,” thus thwarting the stated purpose of the bill.

Republican Senator Mike Lee of Utah also fretted about this possibility of making things worse, stating, “Congress shouldn’t intuitively respond [to a problem] by saying, well, if we can’t regulate it directly, we can threaten to do this or that in order to coerce whatever we want.”

“I’m always reminded of the example of the British government, when it was operating in India, would sometimes do things that had counter-intuitive results for a while,” he said,

“People were dying from Cobra bites . . . [and the British] would pay money for cobras, thinking that would solve the problem . . . They found that people were breeding cobras in order to create a new profit center. We don’t want to breed cobras here.”

Well, at least some lawmakers don’t.

The lack of any testimony from civil liberties or privacy advocates, the disingenuous questioning from most of the Senators and the text of the proposed legislation itself argues that the EARN IT Act is a snake farm in the making, and Graham and Blumenthal don’t seem to care who knows it.