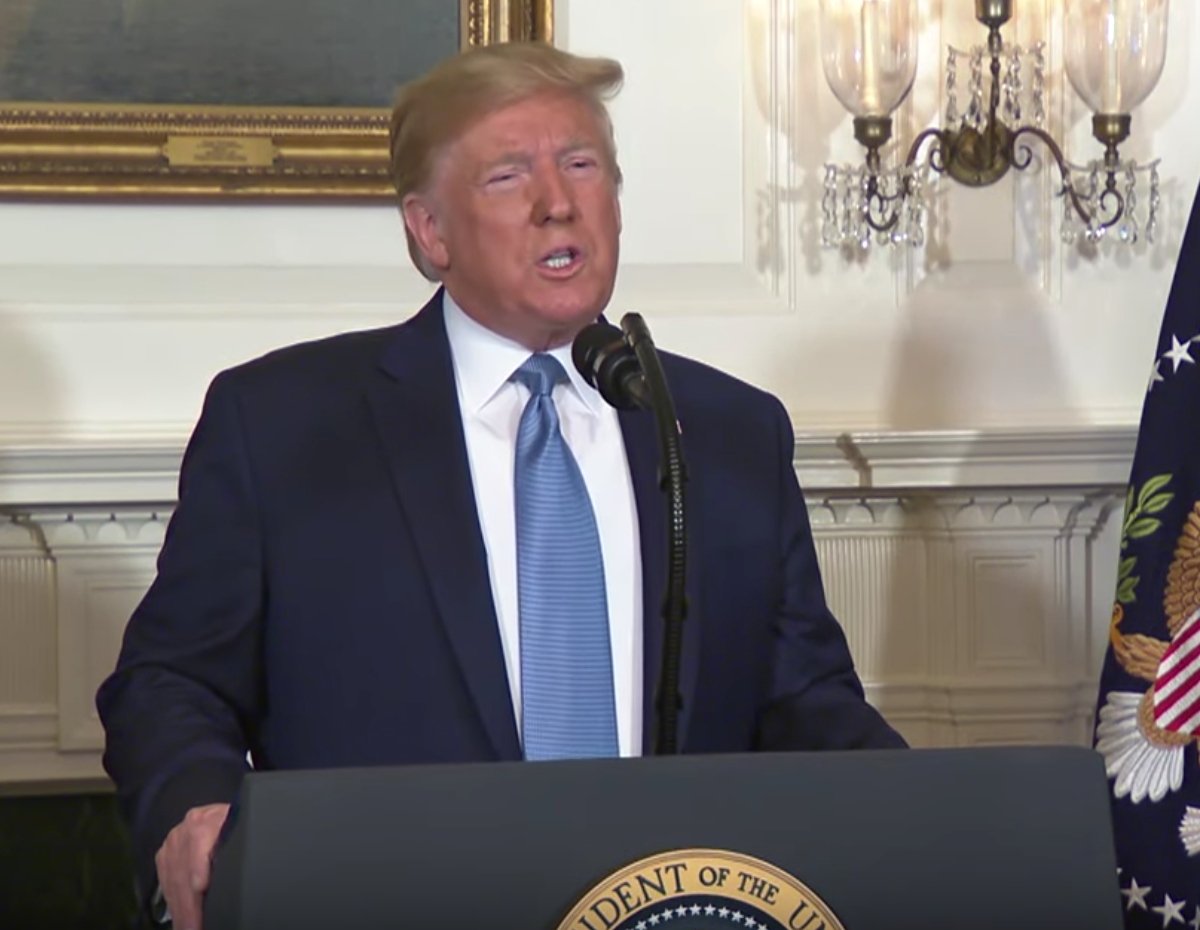 Trump slams video games after a weekend of carnage in two states. Good thing those killers didn't have easy access to firearms, eh? (Screenshot via YouTube)

Donald Trump suggests censoring "gruesome and grisly video games" as his brilliant solution to mass shootings, but a 2011 SCOTUS decision written by a fellow Republican precludes such restrictions.

In addressing the recent mass shootings in El Paso, Texas and Dayton, Ohio, President Donald “Wrong Way” Trump, pointed to violent video games as one factor that he claims is causing random explosions of public slaughter in the U.S.

Standing behind a podium at the White House on August 5, our Orange Caligula blasted “the glorification of violence in our society,” as he read, poorly, from a jumbo teleprompter before him.

“This includes the gruesome and grisly video games that are now commonplace,” he said. “It is too easy today for troubled youth to surround themselves with a culture that celebrates violence.  We must stop or substantially reduce this, and it has to begin immediately.”

His justification: the alleged El Paso shooter made a passing video game reference in a white nationalist manifesto that authorities say he posted to the website 8chan before setting out to kill.

Other Republicans have resorted to similarly-stale Jedi mind tricks of late to blame imaginary violence in video games for actual bloodshed carried out by squirrely goobers with easy access to high-powered firearms.

Perhaps because it’s coming from GOPers, the mainstream media has been quick to debunk this kooky notion, with the New York Times, CNN and various other outlets pointing out that there’s zero evidence to support a link between such violence and video games.

“The data on bananas causing suicide is about as conclusive,” one expert told the Times.

Nor have intense, game-obsessed cultures in countries such as South Korea or Japan resulted in U.S.-style gun mayhem. Unlike the U.S., you see, these countries have strict gun laws.

Save for die-hard MAGA-hat wearers, most folks have seen Trump’s misdirection as being as plain as the tan-line encircling his raccoon eyes. But when it comes to lefties, such obvious virtue-signaling is more than a bit hypocritical. Republicans and social conservatives have no monopoly on the rabid howl for censorship.

In the 1980s, a bipartisan group known as the Parents Music Resource Center sought to restrict the exposure of the nation’s delicate youth to violent and sexist lyrics and imagery used in the decadent, devil-worshipping music industry. During that same period, extremist feminists joined forces with religious zealots in an unsuccessful stab at banning pornography, such as it was in those pre-internet days.

The Communications Decency Act of 1996 (CDA), an effort to regulate “indecency” and “obscenity” online was passed overwhelmingly by both Democrats and Republicans in the House and the Senate and was signed into law by President Bill Clinton, a Democrat, and a rather randy one at that.

Somewhat predictably, in 1997, the Supreme Court struck down the law’s anti-indecency provisions as unconstitutional under the First Amendment.

“Thus, ironically, Justice Alito’s argument highlights the precise danger posed by the California Act: that the ideas expressed by speech—whether it be violence, or gore, or racism—and not its objective effects, may be the real reason for governmental proscription.”

Section 230 of the CDA, the part of the law that holds interactive websites harmless for the third-party content posted by others, was not struck down, and it is largely credited for allowing the internet to thrive as an online marketplace of ideas.

Noted internet law expert Eric Goldman has referred to Section 230 as a “speech-enhancing statute,” that essentially extends the 1A protection afforded to speech online.

And yet, in 2018, Democrats and Republicans in Congress voted overwhelmingly to punch a hole in Section 230, making it a crime to promote or facilitate prostitution online with the Fight Online Sex Trafficking Act (FOSTA). As a result a tsunami of self-censorship decimated otherwise legal, adult-oriented content on the internet.

Being the polecats they are, politicians may not be satisfied until Section 230 is completely gutted or repealed. In a recent essay for Reason magazine, reporter and associate editor Elizabeth Nolan Brown explored how Section 230 is under attack from both the left and the right. The right thinks social media sites are not giving conservative opinions a fair shake, while the left wants to crack down on “hate speech.”

Both Democrats and Republicans have made stabs at censoring violent video games. While Senator from New York, Hillary Clinton sponsored federal legislation to curb sales of video games to minors (it went nowhere), and the Democratic majority of the California legislature passed a law in 2005 to do just that.

Though Republican Arnold Schwarzenegger was the “governator” at the time, his successor, Jerry Brown, a Democrat, also supported the measure, which he had defended as the state’s Attorney General. However, in a ringing defense of the First Amendment, SCOTUS voted 7-2 to strike down the law in June 2011.

The majority opinion in Brown v. Entertainment Merchants Association  was authored by conservative Justice Antonin Scalia, who wrote that video games “qualify for First Amendment protection.” Citing Supreme Court precedent, Scalia made clear that there exist only a few “well-defined, narrowly limited classes of speech,” such as obscenity and incitement. The depiction of violence is not among them.

Nor can the government proscribe the dissemination of protected materials on the premise that children might see them.

“No doubt a state possesses legitimate power to protect children from harm,” Scalia noted. “But that does not include a free-floating power to restrict the ideas to which children may be exposed.”

Indeed, Scalia observed that “the books we give children to read — or read to them when they are younger — contain no shortage of gore.” He gave a few samples from Grimm’s Fairy Tales, which, “are grim indeed,” such as Cinderella’s wicked stepsisters having their eyes “pecked out by doves,” or Hansel and Gretel baking an evil witch in an oven.

Scalia, who proved an uneven defender of free speech over the course of his career, dismissed the contention that because video games are “interactive” they are different from books, movies, comics, etc. He pointed out that video games use many of the same story-telling techniques as other media.

And he cited First Amendment stalwart Richard Posner, former Chief Judge of the United States Court of Appeals for the Seventh Circuit, to the effect that literature is interactive, and, as Posner once wrote, “[T]he better it is, the more interactive.”

Though he concurred with the majority’s opinion, Justice Samuel Alito disagreed with Scalia on key points, opining that playing a video game, “might be very different from reading a book, listening to the radio, or watching a movie or a television show.”

Alito, a conservative, listed a number of particularly vile examples from video games that many progressives no doubt also would object to and seek to censor, such as those depicting violence against women, as well as “a game in which players engage in `ethnic cleansing’ and can choose to gun down African-Americans, Latinos, or Jews.”

Scalia countered that “disgust is not a valid basis for restricting expression.” By listing such morbid examples, Alito sought to arouse the reader’s ire, “and the reader’s desire to put an end” to such a grotesque litany of horribles.

“Thus, ironically, Justice Alito’s argument highlights the precise danger posed by the California Act: that the ideas expressed by speech—whether it be violence, or gore, or racism—and not its objective effects, may be the real reason for governmental proscription,” Scalia wrote.

The left has had fun skewering Trump for pointing to video games instead of guns as a harbinger of death, and rightfully so.

But it’s worth remembering the time that a conservative jurist helped thwart an attempt, endorsed by Democrats, to regulate protected speech. Because there is almost always a next time. 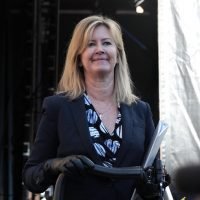