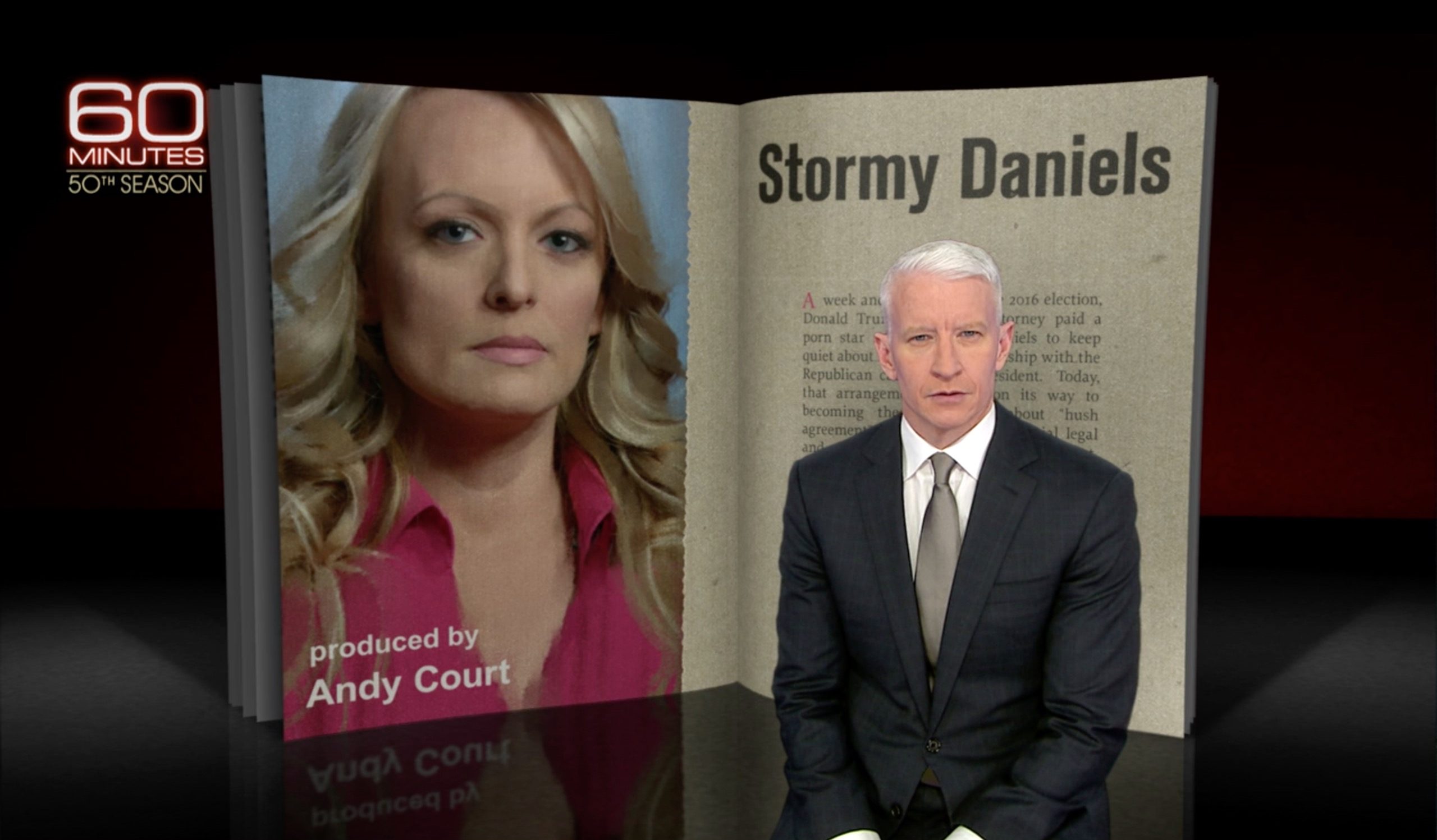 (screenshot of Stormy Daniels and Anderson Cooper via CBS News)

In an interview with Anderson Cooper for CBS's 60 Minutes, adult film star Stormy Daniels spoke out about her alleged one-nighter with Donald Trump

Our long national nightmare is over: Stormy Daniels broke her silence Sunday about her alleged assignation with Donald Trump. During a segment on the CBS news program 60 Minutes, Daniels told Anderson Cooper that she’d been threatened by an unknown man in a Las Vegas parking lot in 2011 not long after granting a magazine interview about her one-nighter with the future POTUS.

The threat Daniels described was one of the few revelations from Cooper’s much-hyped one-on-one with the adult-industry veteran.

Otherwise, Daniels’s account of her encounters with Trump matched the version she gave in the 2011 interview, which ran in January in InTouch Weekly and detailed a 2006 dalliance with The Orange One at a celebrity golf tournament in Reno. (She did dish to Cooper that she wasn’t physically attracted to Trump.)

The White House has denied that the affair took place.

WATCH: Stormy Daniels says Trump told her she reminded him of his daughter https://t.co/KadLoxIeUn pic.twitter.com/LF9BLnp2RL

Daniels, whose birth name is Stephanie Clifford, said she had consensual unprotected intercourse with Trump after dining with him in his penthouse suite at Harrah’s Lake Tahoe. Trump promised to get her a spot on his reality show, The Celebrity Apprentice, she said, but the gig never materialized.

When they next shared alone-time a year later in his bungalow at the Beverly Hills Hotel, Trump attempted an encore, Daniels recounted, but she rebuffed him.

Daniels, now 39, said Trump invited her to a vodka-launch party and to visit him at Trump Tower in New York, and that he phoned her several times to chat her up. But the Lake Tahoe tryst, she said, was their only sexual encounter.

A few weeks after granting the interview, she told Cooper, she was on her way to an exercise class when a man approached her as she was taking her infant daughter out of her car.

“‘Leave Trump alone. Forget the story,'” Daniels recalled the man saying. “And then he leaned around and looked at my daughter and said, ‘That’s a beautiful little girl. It’d be a shame if something happened to her mom.’ And then he was gone.'”

She said her hands were shaking so much that she feared she would drop her baby. She said she was afraid to report the incident to police.

Daniels also said she never received the $15,000 payment. Cooper reported that two former employees of the magazine, a “sister publication of InTouch,” claim the interview didn’t run because when the magazine called Trump’s office for comment, his lawyer, Michael Cohen, threatened to sue. Word of the alleged affair did get out, Cooper noted, in the form of an item in a gossip magazine.

(After the 60 Minutes episode aired, Cohen — via his attorney — denied having anything to do with a physical threat to Daniels and expressed doubt that the incident occurred.)

Five years later, during the 2016 presidential campaign, reporters began contacting her. But instead of speaking out, she entered into a nondisclosure agreement (NDA) with Trump and Cohen, who paid her $130,000 in hush money.

Jeffress' support for Trump proves there is no God & religion is like the @GOP Tax Bill… a complete scam. #StormySunday pic.twitter.com/H4lhP1TRm7

The agreement was consummated only eleven days before the hotly contested November 2016 election, with the memory of Trump’s surreptitiously taped comments about grabbing women “by the pussy” fresh in voters’ minds. Trump went on win the White House with a majority of the Electoral College vote.

Daniels told Cooper that she believes she could have made a lot more than $130,000 by selling her story to the media in advance of the election but that she didn’t want to “kiss and tell and be labeled all the things I’m being labeled now.” She added that she didn’t want her family to suffer from the fallout.

Note: (a) not all of our evidence will be mentioned/displayed tonight – that would be foolish; (b) we are not sure what CBS will include but we know a lot from the full interview will have to be cut bc of the time allowed; (c) tonight is not the end – it’s the beginning. #basta

On January 12 of this year, the Wall Street Journal broke the story of the Trump–Daniels romp and the hush agreement. Daniels said she was pressured by her attorney at the time to sign a statement denying the affair ever occurred, a statement Cohen subsequently released.

Asked if she’d thought there might be legal repercussions if she hadn’t signed it, Daniels replied in the affirmative: “Correct. As a matter of fact, the exact sentence used was, ‘They can make your life hell in many different ways.'”

She didn’t explain who said that to her. But she said she thinks the “they” in question was Michael Cohen.

Daniels has sued Trump in a Los Angeles County court, seeking to be released from the NDA, claiming it is null and void because Trump, who is identified in the agreement as “David Dennison,” never signed it.

Trump and Cohen have responded with further attempts to shut Daniels’s mouth, claiming in a court filing that Daniels owes them $20 million for violating the agreement. Cohen recently bragged to Vanity Fair that Daniels will have to pay up, and that “I might even take an extended vacation on her dime.”

But Trump and Cohen might have more to worry about from l’affaire Stormy than Daniels.

The nonprofit watchdog group Common Cause has submitted complaints to the U.S. Department of Justice and the Federal Elections Commission (FEC), claiming that the $130,000 payment to Daniels represents an unreported, in-kind contribution by Cohen to Trump’s campaign. Cohen insists Trump knew nothing of the payment, that the money came from his home-equity line of credit, and that Trump has not reimbursed him.

"A whole lotta shit" — The full force and insanity of the MAGA Hat army is about to crash down onto Stormy's head. And she knows it. The magnitude of the orange shit storm (death threats, harassment, etc etc) makes her more credible. #StormyDanielsDay #AWholeLottaShit

Cooper interviewed former FEC chairman Trevor Potter, a Republican, for the segment. Potter, now president of the nonprofit advocacy group Campaign Legal Center, opined that the $130,000 could be seen as “a coordinated, illegal, in-kind contribution” made by Cohen “for the purpose of influencing the election.”

Potter suggested that special counsel Robert Mueller — who is leading a probe into Russian interference in the 2016 election —  might investigate the payment, and he said there is precedent for prosecuting an unreported campaign contribution. Potter pointed to the indictment of former North Carolina senator and vice-presidential candidate John Edwards over payments made to a woman with whom he’d fathered a child out of wedlock.

Potter told Cooper that the possible case against Cohen or Trump was more compelling than the facts surrounding the Edwards case, in that Cohen made the payment to Daniels “right in the middle of the run-up to Election Day” — a time when “Trump’s conduct with women was a prime campaign issue.”

Daniels’s current attorney Michael Avenatti has strongly suggested that he may have physical proof of the affair along the lines of photos, video, or email or text messages involving Trump — all of which Daniels was obligated to cough up under the NDA. When Cooper asked Daniels if she’d turned over such items, she said she could not answer the question on advice of counsel.

Last week Avenatti released the results of a 2011 polygraph test that showed Daniels was being truthful about her dalliance with The Donald. Avenatti even tweeted a photo of Daniels wired up to the lie detector.

NEW: In 2011, Stormy Daniels told a polygraph examiner that she had unprotected sex with Donald Trump in 2006.

The exam concluded she was being truthful, according to copy of report obtained by @NBCNews on Tuesday. https://t.co/lRaabJ1C8e pic.twitter.com/8plef08qeP

Calm and serious through most of the interview, Daniels came across as straightforward and determined. When Cooper asked why she had signed more than one statement denying a fling with Trump. Daniels replied that she had felt intimidated and “honestly, bullied.”

Why should the American public believe her, Cooper pressed?

“‘Cause I have no reason to lie,” she said. “I’m opening myself up for, you know, possible danger, and definitely a whole lot of shit.”

(As you might expect, Twitter went wild before during and after the 60 Minutes broadcast, with the hashtags #StormySunday and #StormyDanielsDay doing brisk business. The snark attack included a video from New York City-based “parodist” Miss Laurie Lehner, with her version of Swedish Europop act Ace of Base’s 1993 hit, “The Sign,” which Lehner retitled “He Never Signed.”) 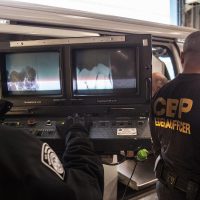