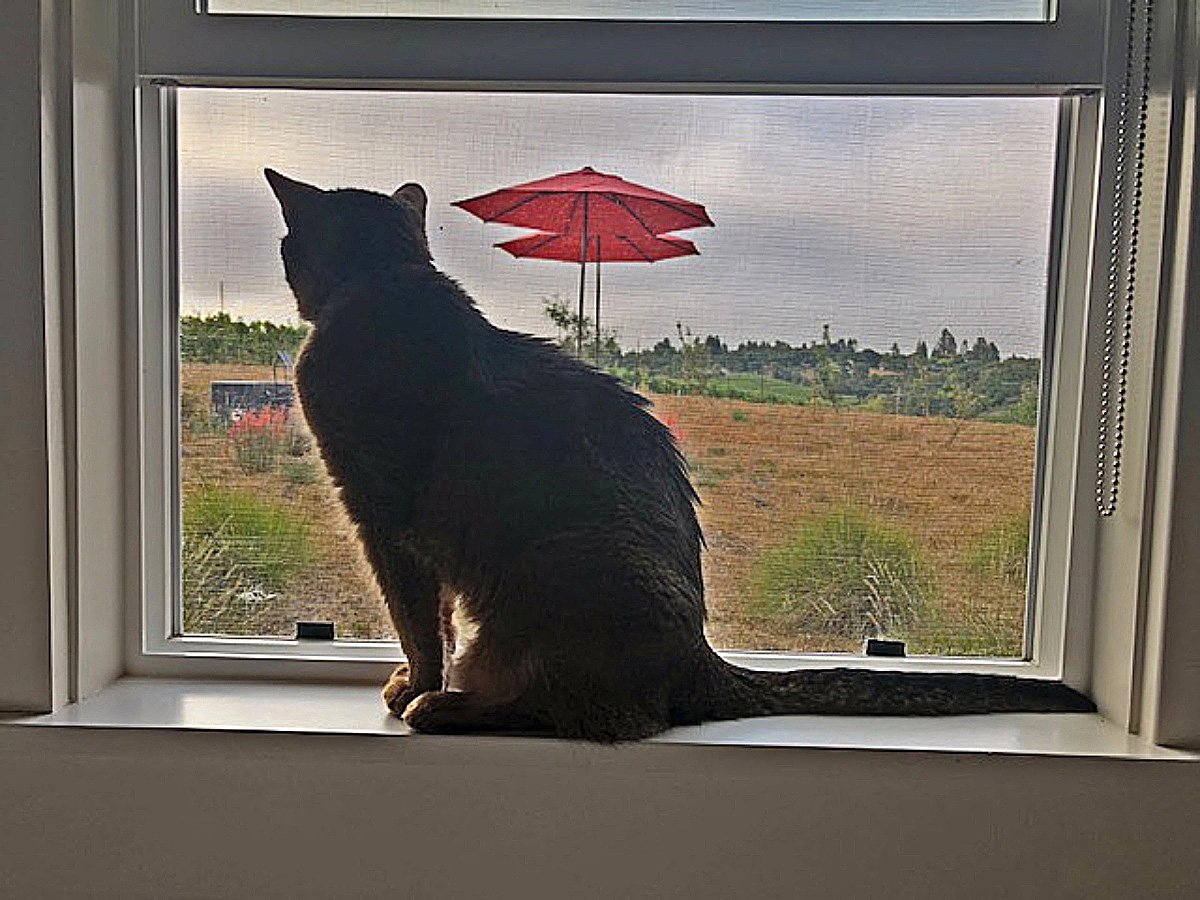 I remember hearing a decidedly unsettling level of operatic shrieking . . . first one tonal insult, then another . . . they joined to mingle the cacophony . . .

I quickly left a storage room attached to my garage thinking only one thought:

How did a prepubescent Italian choir find my garage?

When I ducked through the door, there was my cat, “Abu . . . the Abyssinian assassin” exchanging business cards with a Sonoran desert bobcat.

The sound was indeed operatic . . . if your opera lacked all consonants.

I have seen bobcats in northern California, almost bluish grey with dark spots. They are transcendent creatures, sporting heads graced with tufts and rear legs worthy of a massive schnauzer. Their paws are large enough to pass for Yogi Berra’s catcher’s mitt, if Yogi’s mitt had a set of claws that could fillet a cod.

But this particular beast in my garage was not bluish grey. This predator was the shade of a sand dune, with darker spots the color of tree bark.

And he intended to quickly make a furry burrito out of my cat.

Abu is a resplendent nutmeg brown with balls that he imagines to be epic.

I stepped between the two of them and grabbed Abu.

The bobcat was blasé about a human showing up. He calmly walked back towards the open garage door, sat down, and stared at me, sure that breakfast was only momentarily paused.

Abu was beside himself . . . and beside me, scratching and clawing .

I felt like the paraglider who interrupted the heavyweight championship fight in 1993 between Riddick Bowe and Evander Holyfield.

Abu’s blood was up.

His lineage is such that he skull butts those he loves as if he, in fact, was a lion. He was more affectionate with me than a Dickens’ uncle. He curled up easily in nooks in my body . . . nooks I didn’t know existed.

But he wasn’t disposed to turning his lair into Noah’s ark.

I had to hustle his ass inside the house or he’d have been dead. Not that I could tell him that.

He thinks of dogs, when he thinks of them at all, as target practice.

He began his life with an ecstatic border terrier named Buckley, as in William F., Jr. Many photos capture the pitiful Buckley with all 4 legs splayed out, seemingly walking on his nails, in a futile attempt to get close to Abu. There simply was no chance of them becoming inter-species bros.

Later in his life, Abu would share a home with Miss Lulu, a Catahoula cattle dog. Like many hounds she had a talent for not doing a damn thing. Lulu had more spots than a Rorschach test. She would lay outside soaking in the sun. Once warmed she would poke her head inside the dog door only to be assaulted by Abu, who was already inside.  The cat looked like he was working a speed bag. “How many times have I told you . . . whap whap . . . it’s a cat door…whap.”

In fact, Abu was notoriously pugnacious.

On a fine, sunny day he took offense at a pack of dogs ambling down his street by a compensated dog walker.

Abu, like a Halloween caricature, arched his back and skittled into their midst. Upon arrival he opened his switchblades and assembled a vivid Mardi Gras float of whining pups, tangled leashes, shouts of, “Stop! Stop!” Yelps and howls with spurts of canine blood. When the pack freed themselves from the walker, they wheeled and chased Abu up a tree. He glared at his inferiors.

He leapt out of the arms of an employee and buried himself in my chest. We bonded like ham and eggs.

That’s a long flight from New York to Arizona. About two minutes after we boarded, a man walked through the cabin door and sneezed.

“Has someone got a cat in here?” He demanded.

Why yes, and he’s ticketed.

The fellow sneezed for 5 hours.

Like skin rashes, I kind of think allergies are best kept to yourself. Not that I was asked.

Abu logged many, many airline miles. (Now, he wasn’t quite George Clooney’s character from Up in the Air. Sam Elliot wasn’t going to validate Abu’s 10 million miles.)

He routinely endured flights. Kids loved to see him and he would accommodate rubs from childish strangers.

But it wasn’t his cup of fish heads and blah.

It was always tricky going through security because I would have to take him out of his cat carrier and hold him as we were both x-rayed.

In San Francisco as I held him, his container went through the screening and the TSA agent at the end of the conveyor belt yelled: “Oh my god, whose is this?????”

Abu had evacuated his intestines seconds before I’d pulled him out of the carrier.

“Oh my god” did not begin to cover this sin.

I scooped up the odorific carrier, slapped on my backpack and dashed with Abu in my arms to the men’s room.

In this day and age, guys in men’s rooms will not think twice if you come in and swap out a baby’s diaper. They even have changing tables.

But no one expects to endure a pile of fermenting cat shit that smells like every one of your nose hairs is about to abandon ship.

Guys were bailing out of that rest room without drying their hands.

Washing this out in a sink was complicated by the cat on my chest dug in with claws lest a drop of nasty water might dampen his travelogue.

That son of a bitch.

Often our destination was a tiny patch of apple orchard in west Sonoma county, due north out of San Francisco by about an hour and a half.

I am neither a gentleman nor a farmer. But I settle easily in this milieu.

Apple trees are, each and every one, sculptural, the stuff of sleepy hollow recollections .

You cross through some rolling pasture and you will come to the school house Alfred Hitchcock used in The Birds. It’s a magnificent building full of pregnant memories. It’s simply a roadside attraction.

A little further piece down the road and you will see Hitchcock’s birds, lacking any sense of menace, they simply are part of the local flora and fauna.

Abu was a city boy, but he liked himself some country.

Once in a stairwell, he looked through a window and was transfixed by what he saw.

Of course he did. Let’s be honest, deer look like rats with long legs.

It occurred to Abu: I’m going to need more time in the gym.

My game companion passed away in July.

I guess it is good to learn that your heart can still be broken.

But I’ve wondered since then what kind of god gives us cats . . . and yes, dogs. And every single one of them is going to die on you. They bring us such joy and such loss.

What if this was how our children played out.

We’d none of us would do it.

That weekend my wife and I went to a farmer’s market and found just the right hippie woman who tinkered with metal and bright geegaws. She had a cat-centric piece that I packed up and nailed to a tree once I returned to the orchard.

Abu sleeps beneath the branches and amongst the roots.

And I miss him.

My life of late is consumptive with litigation. Abu was in the habit of curling up in my lap as I read briefs.

My wife is living on her own these days and is good at it.

We are trying to work things out and I carry that hope like loose change in my pocket that I can depend upon.

First thing she did in her new place was get Cleo, an Abyssinian kitten so fierce and ferocious that she might have tangled willingly with Abu.

That thought keeps me warm.