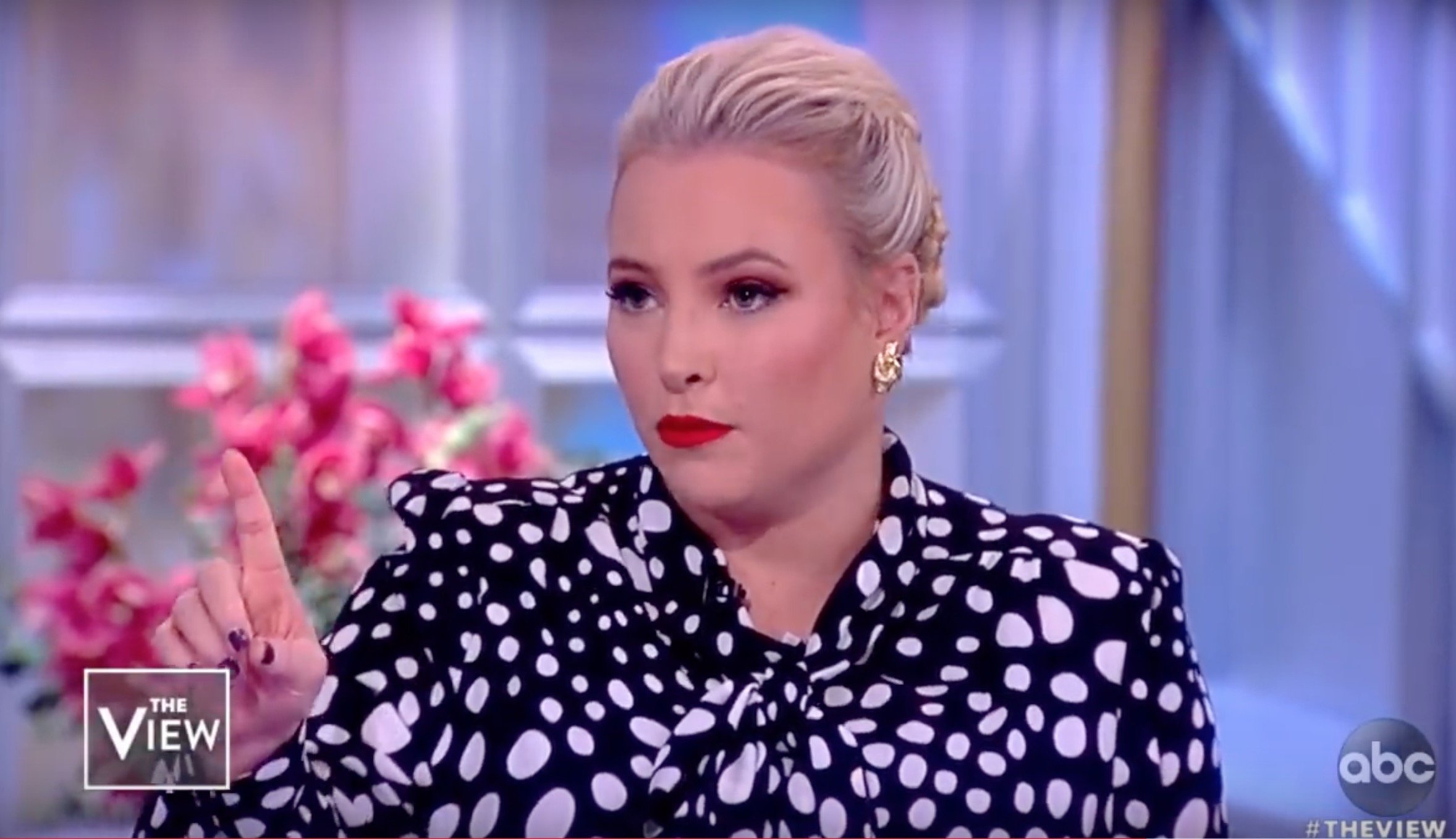 Meghan McCain on January 15, 2019, just getting warmed up (screenshot from ABC's The View, via YouTube)

The View co-host Meghan McCain said she inherited her stance against racism from her dad. But John McCain had no problem with bigotry when it worked to his advantage.

Meghan McCain seldom misses an opportunity to remind everyone who her father was, and when the co-host of ABC’s The View saw a chance to buff the family image during the January 15 episode of the popular daytime TV talk show, she pounced like a lion on a lame gazelle.

The hosts had been jawboning about remarks Republican Congressman Steve King of Iowa made to the New York Times  that were published in a January 10 story.

An outspoken nativist who has long exhibited a penchant for showing off his racist vocabulary, King told the Times he had nothing against immigrants, so long as they enter the United States legally and assimilate “the culture of America.”

Said King: “White nationalist, white supremacist, Western civilization — how did that language become offensive? Why did I sit in classes teaching me about the merits of our history and our civilization?”

The Times story, and a subsequent public statement in which King identified himself as a “nationalist,” had Congressional Republicans lining up to drum him out of the regiment. (King’s long history of racist brain vomit hadn’t prodded his fellow GOPers to action in the past.) The Republican House leadership stripped King of his committee assignments, and the House voted 424-1 to formally rebuke him (step shy of full censure).

The View’s panelists — Meghan McCain and fellow conservative Abby Huntsman, along with Whoopi Goldberg, Sunny Hostin, and Joy Behar — were all in agreement that King’s bigotry renders him unfit to serve in the House of Representatives. Having put that matter to rest, Behar mused aloud about the racial implications of the national debate over immigration and President Donald Trump’s proposed border wall.

That set off McCain, whose views on immigration — yes to increased border security, but no to Trump and his wall — parallel her late father’s deathbed stance.

“I am John McCain’s daughter!” Meghan shouted. “I am not someone who sits here and is okay with racism!”

Lest one dismiss Meghan McCain’s outburst as straight-up virtue signaling, it’s important to remember that in real life, John McCain was far from the paragon of old-school Republican rectitude his daughter likes to paint.

In both word and deed, John McCain exhibited outright bigotry several times during his political career.

John McCain Was Fond of the Racist Slur ‘Gook’

In a 1973 first-person narrative for U.S. News and World Report about his five and a half years as a POW in North Vietnam, McCain made liberal use of the racial epithet ‘gook,’ which, he clarified, “is what we called the North Vietnamese.” He also offered observations such as, “The Oriental, as you may know, likes to beat around the bush quite a bit.”

Coming so soon after his repatriation, McCain’s word choices might be excusable, but he persisted in using the term ‘gook’ for decades.

According to news reports in 2000, McCain regularly tossed out the term while telling old war stories to reporters on his campaign bus, the Straight Talk Express. It took a few months for journalists to call him on it. When they did, he bristled.

“I hate the gooks,” McCain said. “I will hate them as long as I live.”

The senator clarified that he was referring specifically to his captors in Hanoi, and that he did so “in language that might offend some people” owing to the torture he and his fellow POWs experienced at their hands. “’Gook’ is the kindest appellation I can give,” McCain said.

According to the progressive news site ThinkProgress, at the height of the movement to divest from South Africa’s apartheid regime in the 1980s, then-U.S. Rep. John McCain voted six times to reject sanctions against the nation.

In 1986, the U.S. House voted overwhelmingly to override President Ronald Reagan’s veto of a sanctions bill. McCain, who was then running for the Senate to replace Barry Goldwater, changed tacks and voted in favor of the override, along with 80 fellow Republicans and 232 Democrats.

Decades later, he would claim he’d originally been worried that the African National Congress, the opposition group led from prison by Nelson Mandela, had to communist ties. A trip to South Africa, he said, convinced him that “these apartheid guys…were just thugs,” and he changed his stance.

His vote placed him in a distinct minority. Only 90 House members voted against the measure, which became law and was signed by Ronald Reagan.

Running for president can inspire a man to see the error of his ways. During a 1999 appearance on NBC’s Meet the Press, McCain said he regretted his opposition to the holiday. When he ran for president again in 2008, he offered a mea culpa to a crowd in Memphis, the city where King was assassinated, calling his stance “a mistake.”

In the 2000 Presidential Race, Candidate McCain Tooted His Dog Whistle

McCain’s Straight Talk Express hit a brick wall of duplicity during South Carolina’s GOP primary battle in 2000, when the senator faced off against then-Texas governor George W. Bush. At the time, the Confederate flag flew over the Palmetto State’s capitol, presenting a stubbornly contentious issue.

Speaking on a Sunday news program, McCain said he considered the flag a “symbol of racism and slavery.”

Twenty-four hours later, he released a statement in which he called the flag “a symbol of heritage.”

The flip-flop didn’t help: Bush trounced McCain by double digits in South Carolina and went on to wrap up the nomination a few weeks later.

A month later, he was back in South Carolina to speak at a luncheon, where he apologized for his U-turn on the flag, confessing that he released the “heritage” statement because he so badly wanted to win. “I broke my promise to always tell the truth,” McCain said.

Above all, McCain was a ruthless politician, and, Meghan’s contention to the contrary, he was okay with racism, as long as it benefitted him politically.