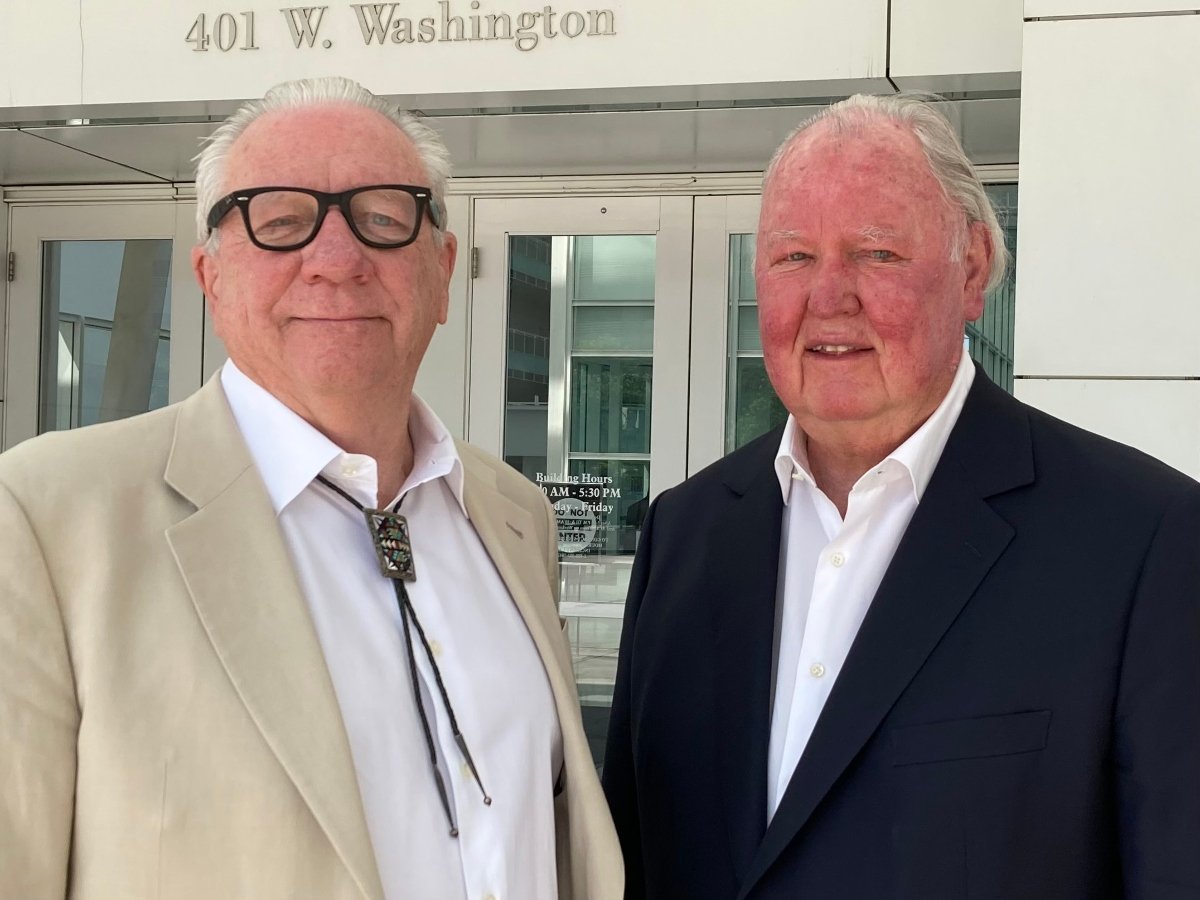 First Amendment warriors Michael Lacey (left) and Jim Larkin, outside the federal courthouse in Phoenix after Judge Brnovich declared a mistrial in their case. (Stephen Lemons)

U.S. District Court Judge Susan Brnovich stunned prosecutors on Tuesday morning when she declared a mistrial in the government’s case against lifelong journalists Michael Lacey and Jim Larkin, whom the prosecution aims to imprison for the rest of their lives because of their erstwhile ownership of the now-defunct classified listings site, Backpage.com.

Though Brnovich denied previous mistrial motions in the case, the judge seemed particularly troubled by this one, which came Monday afternoon following testimony from government witness Sharon Cooper, an anti-porn crackpot who has likened pornography’s effect on the brain to that of cocaine.

But Lacey, Larkin and their four co-defendants are not charged with trafficking or harming a child in any way. Rather, they are charged with 100 counts of conspiracy, money laundering and facilitating misdemeanor state prostitution offenses in violation of the U.S. Travel Act.

After reviewing the transcripts of the last few days of trial, Brnovich told the parties that the government had stepped over the line.

“They poisoned the water. And we want an opportunity to look at the facts, the evidence. Not hysteria, not politics, not moral judgement, but just the law in black and white. If they want to bring the evidence, we welcome that fight.” — defense attorney Whitney Bernstein

Brnovich explained that Jones’ opening statement “had been close to causing mistrial,” though she declined to grant an earlier mistrial motion based on Jones’ inflammatory, X-rated opening. In it, the D.C.-based prosecutor practically called the defendants’ child sex traffickers and showed the jury hardcore pornography that never appeared on Backpage.

The prosecution’s questioning on Friday of a woman who had been trafficked while a teenage runaway in 2010 was also problematic, said Brnovich.

The woman was 15 at the time, and she and her traffickers posted ads on the adult section of Backpage, violating the site’s prohibition on illicit activity and its age restrictions.

Brnovich allowed her testimony, but ordered the government to stay away from prejudicial details.

Still, the woman talked about being under the control of pimps for “105 days,” testifying that she had been “raped for money” by men responding to the ads.

Such details raise “a whole new emotional response from the jurors,” said Brnovich. Similarly, Cooper had talked about “the overwhelming majority of victims” of trafficking being the subject of ads uploaded to Backpage. But this anecdotal evidence, Brnovich explained, “was not tethered to some communication with the defendants.”

HOLY SHIT. Brnovich said she reviewed transcripts from last couple of days and is going to grant motion for mistrial!https://t.co/J60SEtVehE

Prosecutors “are held to a higher standard,” and their goal is not to “win at any cost,” but to play fair and “see that justice was done,” Brnovich said. She did not believe the prosecution’s misconduct was “intentional,” but the “cumulative effect . . . is just something that I can’t overlook.”

Brnovich then dismissed the jury and set a hearing date for Oct. 5 to discuss how to proceed. Lacey and Larkin are still under indictment, with their movements restricted to Maricopa County and monitored by ankle bracelets.

If the government continues to pursue the case, a new jury will have to be selected, and a new trial may not occur until next year.

Both smiling, Lacey and Larkin declined to comment, but they did pause on exiting the courthouse for the photo above.

Whitney Bernstein, who represents Larkin, said Brnovich’s decision was appropriate “given the government’s continued and blatant conflation of child sex trafficking” with the charges in the indictment.

“We look forward to a case on the indictment that they actually brought,” she said. “They poisoned the water. And we want an opportunity to look at the facts, the evidence. Not hysteria, not politics, not moral judgement, but just the law in black and white. If they want to bring the evidence, we welcome that fight.”

Joy Bertrand, an attorney for one of Lacey and Larkin’s co-defendants, Joye Vaught, said she was not  surprised with the judge’s decision, given the extent of the government’s misconduct.

I asked Bertrand what she thought the government’s biggest mistake was.

“Do you think [the prosecutors] unintentionally ignored the judge’s orders and unintentionally called those witnesses and unintentionally spoke those words? I mean, they don’t have a case of Tourette’s where they just spout out anything. They’ve been planning this mode of attack since the case began.” — former Arizona State Bar President, Michael Piccarreta

“Charging it in the first place, and doing such an overbroad attempt to conflate child trafficking [with other forms of trafficking] and El Salvadoran people in boxcars, and all of it becomes prostitution, and that’s crazy,” she said, exaggerating only slightly. “It’s just intellectually dishonest.”

"I have suspected that this trial was more political theater than legal proceeding" writes @Hal_RTFLC "an excuse to justify more abuse of constitutional rights & clamp down on internet content. Nothing I have seen this week dissuaded me from that opinion" https://t.co/b71lkdDSme

Bertrand said this played out with every witness the government put on, none of whom offered any testimony about what was charged in the indictment.

“They put a witness on the stand who’s a California investigator and did not know the definition of prostitution, but wanted to tell us what his version was,” Bertrand said of Cali DOJ agent Brian Fichtner, who could not recite key portions of his state’s prostitution law when asked to do so by Larkin-attorney, Thomas Bienert.

Similarly, Fichtner had to admit that the vague verbiage that appeared in many adult ads on Backpage was not illegal. Fichtner could not arrest someone or take a case to a district attorney based just on an ad, like those cited by the government during Fichtner’s testimony.

And Fichtner acknowledged that even sex workers have free speech rights under the First Amendment.

“The government doesn’t get to tell us what regular words mean,” Bertrand said of the government’s inane explanations of so-called “code words” for sex trafficking.

“The law tells us what these words mean, if our common sense does not. And here the government’s case didn’t match the law or the common sense,” she said.

I did attempt to get a comment from prosecutor Jones, but he said no. His face was frozen in disbelief.  He actually looked like he was about to cry.

I called my go-to legal analyst, Tucson defense attorney and former Arizona State Bar President, Mike Piccarreta, to ask his thoughts on the court’s move. His opinion seemed to be: well, it’s about time.

“There was obviously misconduct that led the court to declare a mistrial,” Piccarreta said. “And when you look at the history of this case,  there is a pattern of prosecutorial pushing the envelope . . . actually exploding the envelope.”

i hate to be on the side of rich white men but michael lacey and jim larkin did basically everything right and the feds still went after them. and yet some of you broads are still on here arguing about legality and how you’re not like these other whores. pic.twitter.com/JHGKsxy74t

Piccarreta was referring to the use of excessive force, the FBI raids on Lacey and Larkin’s homes at gunpoint, the terrorizing of their families and the seizure of all valuables in sight, especially considering that both Lacey and Larkin offered to turn themselves in if charged.

In fact, the government overkill has been outrageous. Prosecutors demanded excessively high bails for each man of $1 million apiece, despite pre-trial services saying they should be released on their own recognizance, like the other defendants. The feds also liened their properties and seized all of their assets, even money acquired pre-Backpage, in an effort to starve them out.

Plus, the government seized money set aside for the defense of Backpage employees, one of whom Piccarreta was representing, until nine months into the case, the feds seized those funds, forcing Piccarreta to withdraw.

Similarly, prosecutors seized all monies set aside for Lacey and Larkin’s First Amendment attorneys, who are — surprise, surprise — no longer on the case.

So Piccarreta doesn’t believe that the prosecution simply made a boo-boo.

Litigation is like a war of attrition, they say.  And Napoleon’s soldiers ain’t eating their horses quite just yet.

The lack of support from the free speech community has been notable. Exceptions to this rule include Reason magazine, the Cato Institute and the DKT Liberty Project.

Members of the public were able to listen to the trial via an open phone line provided by the court, so a number of activists and ordinary people have weighed in on Twitter and other platforms.

One of the former is Cris Sardina, director of the non-profit group, Desiree Alliance, which advocates for the civil rights of sex workers.  She’s been live-Tweeting the trial, and believes the mistrial is a historic win for free speech online, even though the charges against the defendants have yet to be dismissed.

“To me, this was always about the First Amendment and every other right under that first one,” she explained via phone today.

“I mean, once Backpage’s free speech gets taken away, who’s next?” she asked. “I know it’s not over, but today’s action by the judge — I’m taking it as a win.”

Never underestimate, however, the vindictiveness of those with power. They loathe to lose, especially to two feisty, anti-authoritarian Irishmen of the likes of Lacey and Larkin.