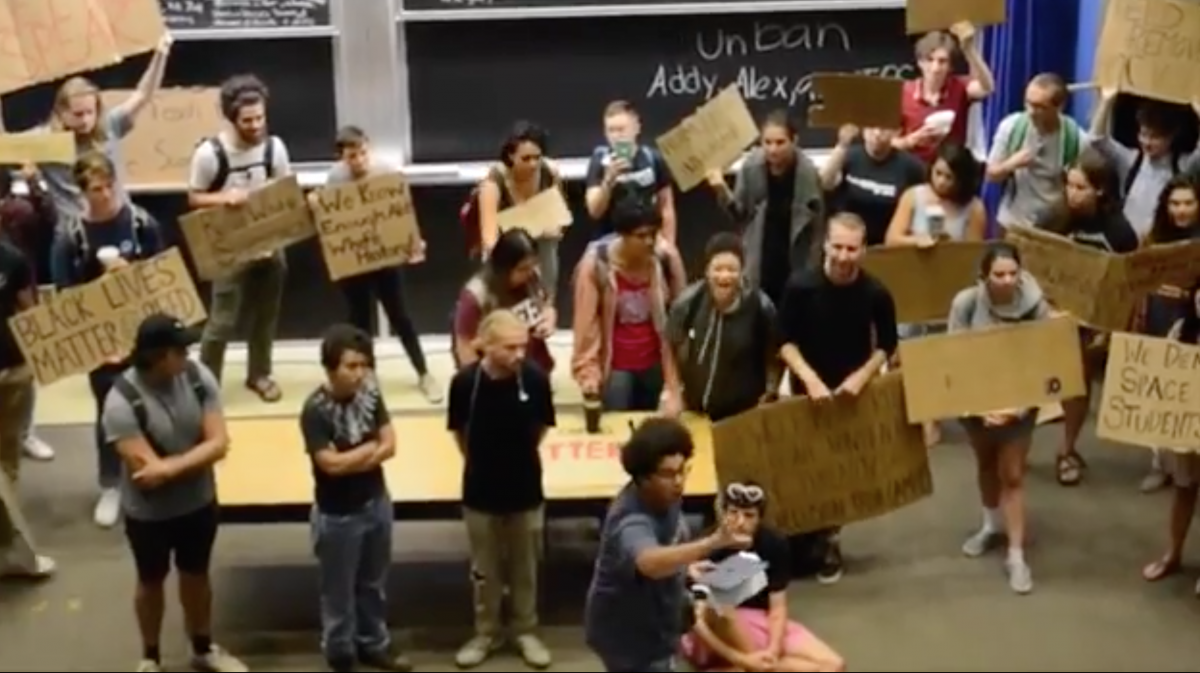 A pivotal moment during a Reedies Against Racism classroom takeover: Freshmen stand up to challenge the group's disruptive tactics (screenshot via YouTube).

For an entire year at Reed College, Reedies Against Racism staged a sit-in at every Humanities 110 class. Then a new freshman class arrived.

A recent article published in The Atlantic tells the story of Reed College‘s political-correctness police, Reedies Against Racism (RAR). A departure from most of what we see these days regarding student activism, “The Surprising Revolt at the Most Liberal College in the Country” packs an actual surprise: hope.

Chris Bodenner spins an engrossing tale of how a Hogswarts-like liberal-arts college in Portland, Oregon, with a 2017 enrollment of about 1,500 (and a griffin for a mascot), witnessed the rise of a determined cadre of young social-justice warriors (SJWs), who protested racism and “anti-blackness” on campus, in the process pitting themselves against Reed’s faculty, its administration, and their own fellow undergraduates.

In September of last year, RAR declared war on Humanities 110, a required course for all Reed freshmen . Hum 110, as it’s known, has a syllabus that covers ancient Mesopotamia, Persia, and Egypt. As part of the class, students break into groups to “discuss, debate and defend” their opinions of the reading material.

In other words, typical liberal-arts pedagogy.

As part of a one-day boycott of all classes at Reed last September, which RAR orchestrated in response to a recent nationwide rash of police shootings of unarmed black men, the group published a list of 25 demands.

Complaining that the class “perpetuates white supremacy,” RAR deemed Hum 110 “a cruel test for students of color” that “traumatized” minority students at the majority-white school. To drive home its point, the group commenced to stage prolonged classroom disruptions of each and every meeting of each and every Hum 110 section that entire school year. Demonstrators held up signs, recited chants, and harangued teachers and fellow students who didn’t fall in line.

One target of RAR’s anger was Steve Martin’s 1978 novelty tune “King Tut,” which was the subject of a classroom debate featuring the screening of a video of Martin performing the song that year on Saturday Night Live.

In “King Tut,” a silly sendup of the “Treasures of Tutankhamun” exhibit that toured U.S. cities in the late 1970s, RAR saw “a song just littered with the n-word everywhere” and a performance that featured an “exhibition of blackface.” The latter consisted of SNL band member Lou Marini popping out of a prop sarcophagus blowing his saxophone, wearing a pharaoh’s headdress, his skin painted gold.

(Imagine RAR’s outrage if the topic of debate was the opening scene from The Jerk, wherein Martin’s painfully white lead character Navin R. Johnson narrates that he was “born a poor black child” and recalls the days spent “sittin’ on the porch with my family, singin’ and dancin’ down in Mississippi.”)

Reed’s administration proved no match for RAR. As Bodenner tells it, the group nigh terrorized the teachers into submission as the school stood by.

The pushback from freshmen first came over Facebook. “To interrupt a lecture in a classroom setting is in serious violation of academic freedom and is just unthoughtful and wrong,” wrote a student from China named Sicheng, who distributed a letter of dissent against RAR. Another student, Isabel, ridiculed the group for its “unsolicited emotional theater.”

Two days later, a video circulated showing freshmen in the lecture hall admonishing protesters. When a few professors get into a heated exchange with RAR leaders, an African American freshman in the front row stands up and raises his arms: “This is a classroom! This is not the place! Right now we are trying to learn! We’re the freshman students!” The room erupts with applause.

I caught up with that student, whose name is Pax. “This is a weird year to be a freshman,” he sighed. Pax is very mild-mannered, so I asked what made him snap into action that morning. “It felt like both sides [RAR and faculty] weren’t paying attention to the freshman class, as it being our class,” he replied. “They started yelling over the freshmen. It was very much like we weren’t people to them — that we were just a body to use.”

Though RAR continues to stage sit -ins and disruptions at Reed, Bodenner sees its influence on the wane.

“The Surprising Revolt at the Most Liberal College in the Country”