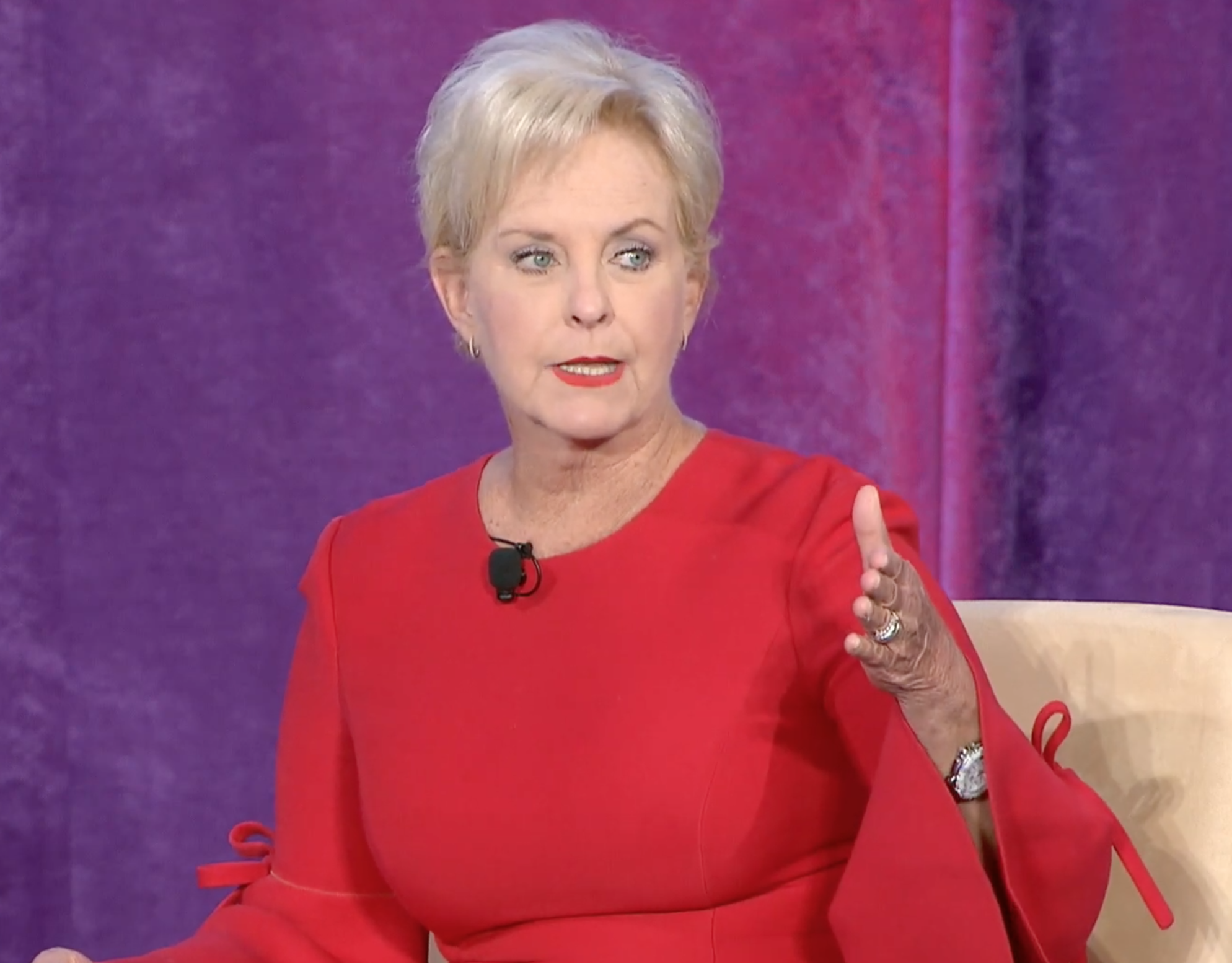 Cindy McCain at the 2019 summer meeting of the National Governor's Association. (Screenshot via Youtube)

At a July meeting of the National Governors Association, Cindy McCain regaled listeners with several of the stale canards she's used time and again to promote sex trafficking paranoia.

Multimillionaire beer heiress Cindy McCain doesn’t have to work for a living, leaving her plenty of time to travel the world spreading misinformation and hysteria about human trafficking. The latest stop on Cindy’s Moral Panic Express? Salt Lake City, for the July 25-26 meeting of the National Governors Association (NGA), where her poorly-coiffed pal, Arizona Governor Doug Ducey, interviewed her onstage about her fave subject.

McCain has made fighting human trafficking one of the pillars of the McCain Institute, a namesake of her late husband, Sen. John McCain. FYI: “Human trafficking” is an umbrella term that involves either forced labor, or commercial sex involving minors or adults through force, fraud and coercion. By contrast, prostitution, a misdemeanor offense, is commercial sex between consenting adults, though McCain and others in her anti-sex worker camp like to conflate these terms in order to advance their agenda.

Mother McCain is almost entirely concerned with sex trafficking, which actually is far less common in the U.S. than other violent crimes, such as murder, rape and aggravated assault.  But McCain never lets reason and facts get in the way of effective fear-mongering, as evidenced by the sampling below of crackpot quotes from her Q & A at the NGA.

These are kids that are being trafficked locally, within your own neighborhoods, on our reservations, within our backyards, our malls, everything. It is everywhere. And these kids are domestic kids. So the belief in some circumstances that this only happens overseas is not the case. It happens right here, right under our noses. In Salt Lake City it’s happening right outside the front door of this hotel. It’s everywhere. It’s an epidemic. — Cindy McCain

McCain and her allies in various nonprofit are particularly fond of such ridiculous hyperbole, for which there is zero backup. Since 2007, the FBI has run a massive, annual multi-agency sting called Operation Cross Country, which the FBI decided to forgo in 2018 so the bureau could “reevaluate” its effectiveness. The program has arrested several thousand adult sex workers over the course of 11 years, while rescuing less than 1,000 juveniles and arresting just 1,374 alleged “traffickers.”

That’s hardly evidence of an “epidemic.” Moreover, the State Department’s 2019 Trafficking in Persons Report (TIP), an annual assessment of the efforts of 187 countries to combat human trafficking, states that the U.S. government “opened, charged, and prosecuted fewer cases” of human trafficking in Fiscal Year 2018 than in FY 2017. The problem is not as ubiquitous as McCain suggests.

A visit from Mama McCain is never complete without her almost impossible-to-verify origin story of many years ago when she was in Calcutta, India, shopping for material for a sari for her adopted, Bangladesh-born daughter, Bridget.

While in the shop, she heard “rumbling” from below, which the shopkeeper assured her came from his family’s living quarters, but as she left, she looked down, and between the slats in the floorboard, she could see “all of these little eyes looking up.” They were all young kids, she claims, “being held against their will and clearly all of the things you can imagine.”

“McCain has told this story many times: Sometimes, there are as many as “100 sets of eyes,” but she’s always certain they belonged to ‘little girls.’ It was an unsettling awakening, she says, launching her new public persona: a concerned mother turned anti-trafficking leader.”

It’s not the only time McCain’s veracity has been questioned. Back in 1994, the feds caught her swiping opioids from a now-defunct non-profit that allowed her to play white savior woman as she traveled to third-world countries, helping out with medical supplies and volunteer doctors.

She dodged doing time, and tried to spin her drug addiction as a tale of courage, not selfishness. In 2008, as her husband was running for president, the Washington Post challenged her story that she got hooked on pain pills after lifting one or the other of her children.

I basically put a bunch of people together as friends that I knew in my living room. And I said, ‘We absolutely have to do something about this.’ The catalyst to all of this was the Super Bowl. It was coming. It was such a scourge. It was an epidemic, an issue that goes underreported and underappreciated to the effect it has on the community. I just did not want to see Arizona embarrassed in any way, or not only that, but I wanted Arizona to have a healthy, happy, safe Super Bowl. That was really the catalyst in all this. — Cindy McCain

McCain is referring to the run up to 2015, the year Arizona hosted Super Bowl XLIX at Glendale’s University of Phoenix Stadium. In 2014, then Governor Jan Brewer created the Arizona Human Trafficking Council, with McCain as one of its co-chairs.

It was in 2014 that McCain reportedly called the Super Bowl “the largest human-trafficking event on the planet.” That myth had already been debunked by the Global Alliance Against Traffic in Women, an alliance of  more than 80 NGOs across the world, which in a 2011 report stated: “[T]here is no empirical evidence that trafficking for prostitution increases around large sporting events.”

Since that report, the myth that the Super Bowl is a magnet for sex workers and their clients has been debunked by numerous publications, such as, Snopes.com, PolitiFact, Sports Illustrated, Slate and even a 2015 study sponsored by the McCain Institute, which states that there is, “no empirical evidence that the Super Bowl causes an increase in sex trafficking compared to other days and events throughout the year.”

Still, every year, come Super Bowl time, prostitution abolitionists predict that sex traffickers will be trading child sex slaves in the streets like bubble gum cards, law enforcement drops millions on enforcement, and many in the media simply regurgitate the falsehoods fed to them by activists, pseudo experts and cops. Thanks to fanatics like McCain, this hoax is harder to kill than Robert DeNiro’s character in Cape Fear.

We use the saying — we stole it from Homeland Security, `If you see something, say something.’ Go ahead and do it. Call somebody.

McCain’s Human Trafficking Council claims to have trained “31,000 professionals and community members,” everyone from airport employees and nurses to teachers and students.

Which is particularly disturbing if these folks use super-sleuth Cindy McCain as their model. Back in February, McCain boasted to a Phoenix radio station that she had saved a child from sex trafficking at Phoenix Sky Harbor Airport when she spotted a woman  “of a different ethnicity” than the toddler she was with.

She said she trusted her “gut,” and reported the pair to the police, who “went over and questioned her and by God she was trafficking that kid.”

McCain also claimed that the woman was “waiting for the guy who bought the child to get off the airplane.”

Turned out none of this was true. The Phoenix police later confirmed that “there was no evidence of criminal conduct or child endangerment.”

This incident joins a number from the last couple of years where eagle-eyed flight attendants have reported mixed-race couples and families to law enforcement on the suspicion that sex trafficking was afoot, when, in fact, it was not.

McCain has been exploiting the myth of a sex trafficking “epidemic” for years, like an Energizer Bunny of bilge, reaping kudos from fatuous nobs, simpering scribblers and poltroonish pols. When the history of this mass insanity is written, she will be its forked-tongue Cruella de Vil.