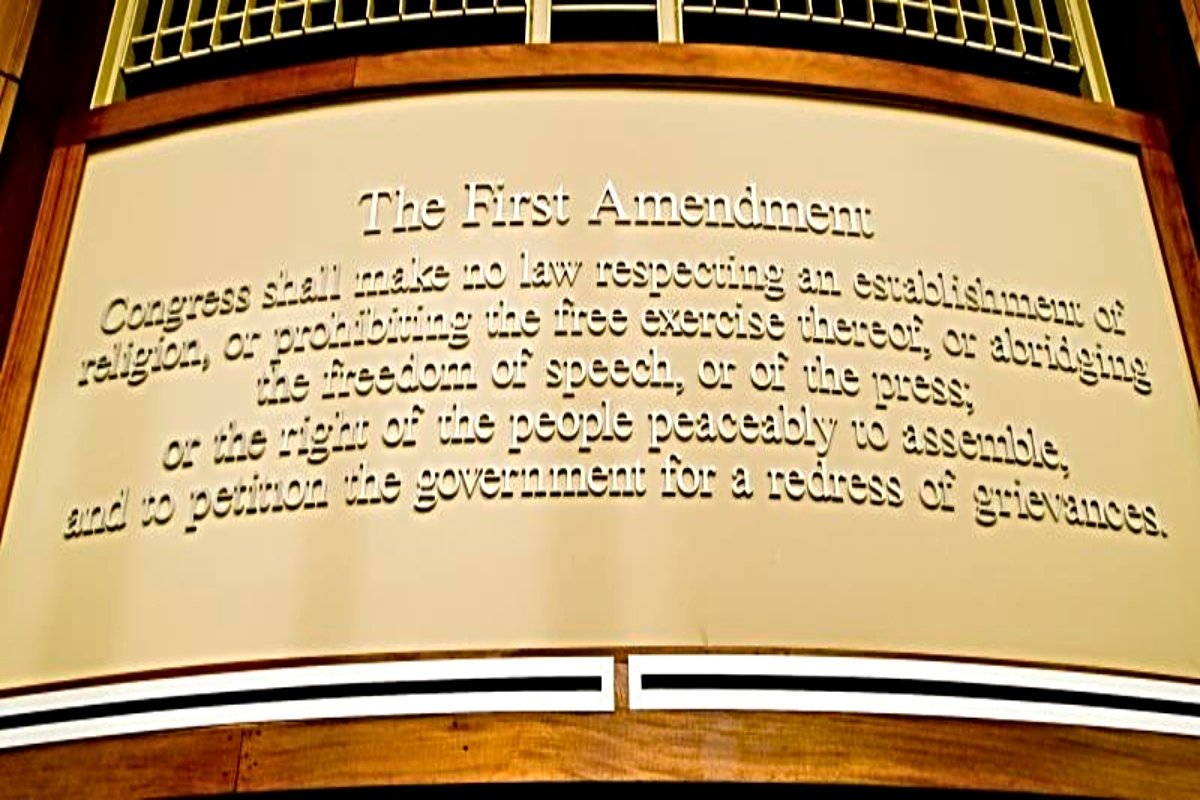 Liberals and conservatives alike assail it, but barring a constitutional amendment, 1A is here to stay. (Patrick Giblin via Flickr; dimensions altered from original)

The vaunted Gray Lady, pillar of the Fourth Estate, contemplates limits on freedom of speech, Section 230 and the First Amendment, in reaction to the tragedy in El Paso.

As ex-Chicago mayor Rahm Emanuel, once remarked, “Never let a good crisis go to waste.” Following this classy dictum in the wake of the El Paso tragedy, Trump has vowed to rein in violent video games, Democrats have revived plans to ban so-called “assault rifles,” and The New York Times has just about had it with all this free speech claptrap.

That’s right, the paper regarded as a First Amendment champion for battling the federal government in the Pentagon Papers case has taken a shine to European-style laws regulating the internet and banning “hate speech” online.

The fishwrap of record’s argument boils down to this: Extremists of every ilk are using social media to promote hatred and violence, and Patrick Crusius was the last straw. Crusius, of course, is the alleged mass murderer, who, authorities say, posted a hate-filled, anti-Mexican screed to the forum 8chan about a half-hour before mowing down 22 people at an El Paso Walmart on August 3.

In the manifesto, Crusius described his killing spree as “a response to the Hispanic invasion of Texas,” and an attempt to prevent the “cultural and ethnic replacement” of Anglos. The latter is a reference to a supremacist conspiracy theory known as “white genocide,” which posits that ofays will soon go the way of the dinosaur, if something isn’t done to stop their “replacement” by non-white minorities.

Crusius’ bloody rampage follows a well-trod pattern of racist killers using social media to gain attention and advance their violent agendas, such as the mosque shootings in Christchurch, New Zealand, which took place in March. In that case, the gunman livestreamed his attack on Facebook and posted a white supremacist manifesto online.

The Times would have us believe that the real culprit is not some heavily-armed, racist nutcase, but the internet, because that’s where all the bad ideas come from. One solution: amend or repeal Section 230 of the Communications Decency Act of 1996, which largely holds interactive websites and computer services harmless for content posted by third parties.

Known as “the fairy godmother of the internet,” Section 230 has allowed the online world to flourish and led to an enhancement of free speech rights in cyberspace. Broadly, the “speaker” is held responsible for his or her speech, not the website or server involved. Websites may moderate such content as they see fit, or not. Though most opt for some form of moderation.

In the immediate aftermath of the El Paso massacre, the Times editorial board declined to call for government censorship, and instead encouraged big tech in an unsigned editorial to “de-platform white nationalist propaganda … as they did ISIS propaganda.” A couple of days later, the Times explored more radical solutions in two reported pieces published on August 6 that read more like op-eds.

In one, the Times took up most of business section’s front page with the title,  “Why Hate Speech On The Internet Is A Never Ending-Problem: Because This Law Shields It.” The “law” in question was the part of Section 230, which reads, “No provider or user of an interactive computer service shall be treated as the publisher or speaker of any information provided by another information content provider.”

That premise was wrong from jump: Section 230 does not protect “hate speech,” because, generally, hate speech is not illegal in the United States. The First Amendment of the U.S. Constitution protects all speech, including hate speech, save for a few exceptions, such as incitement to violence, child pornography and libel.

Readers pilloried the Times online, and editors were forced to change the headline and append this correction:

“An earlier version of this article incorrectly described the law that protects hate speech on the internet. The First Amendment, not Section 230 of the Communications Decency Act, protects it.”

On the same date, theTimes ran a piece that described Europe’s legal version of a kinder, gentler Big Brother, with restrictions on hate speech and a government veto over what can or cannot be said online.

Europe’s take on free speech is presented as more enlightened, which it may be, as long as you don’t post something provocative, then you can be criminally prosecuted for it. In March 2018, Front Page Confidential reported on a particularly ridiculous example of political correctness across the pond with a story of a British YouTuber arrested and found guilty of a hate crime for posting a video of his pet pug flipping a Hitler salute on cue. No joke.

The concept that the populace will be safe from terrorism, domestic or otherwise, once the authorities cleanse the internet of noxious ideas is patently absurd. Consider the case of Timothy McVeigh, who was inspired by a racist novel, The Turner Diaries, to fill a Ryder truck full of fertilizer and blow up the Murrah Building in Oklahoma City, killing 168 men, women and children.

If your answer to that is, well, ban the book, too, you might as well pull Mein Kampf  and Mao’s Little Red Book from the library shelves, not to mention the Bible and the Quran, both of which have inspired acts of violence from madmen.

Oh, and nix Catcher in the Rye, too, while you’re at it.  J.D. Salinger’s classic novel of teen angst motivated John Lennon’s deranged killer, Mark David Chapman, who, along with the book, inspired Ronald Reagan’s would be assassin, the equally loony John Hinckley. Though, admittedly, Hinckley was more influenced by the Martin Scorsese film Taxi Driver.

Many applauded a move by content delivery service Cloudflare to kick the message board 8chan to the curb after the El Paso attack, but what if Crusius had posted his manifesto to Twitter before shooting up the Walmart?