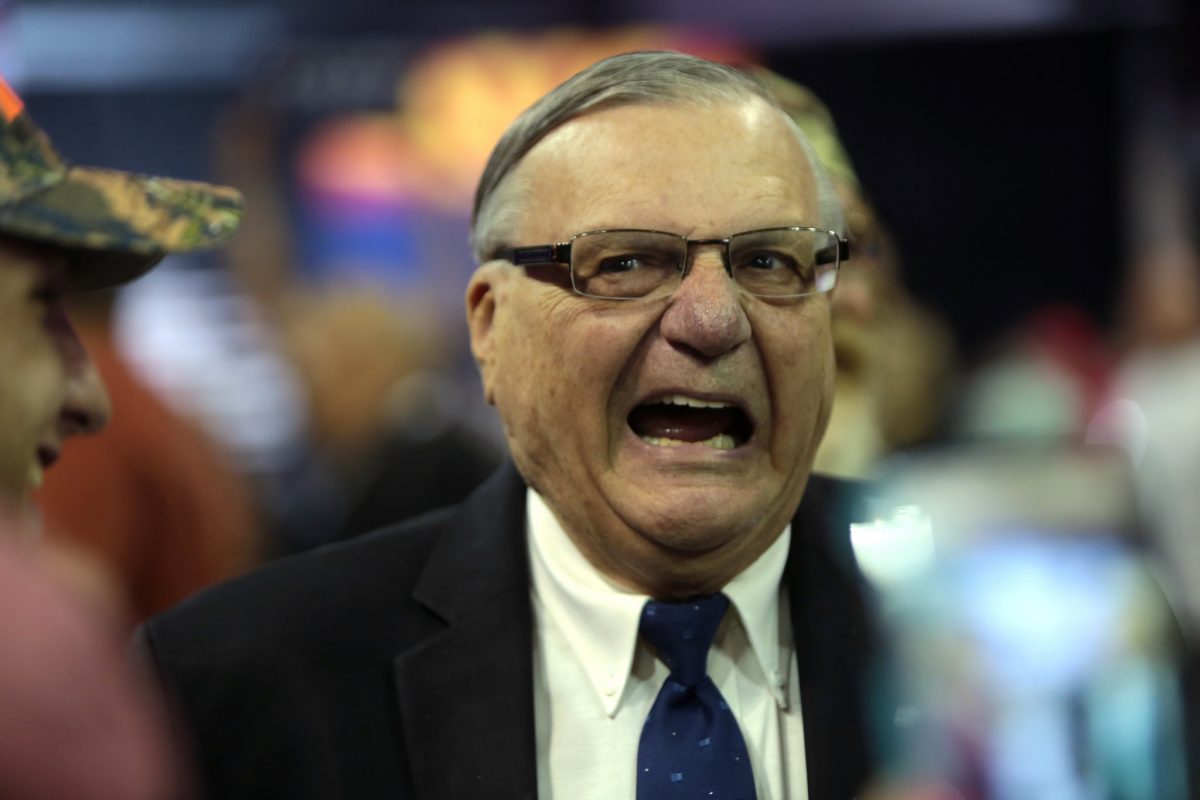 Try not to laugh, but Joe Arpaio -- the scandal-plagued, Trump-pardoned, octogenarian ex-sheriff from Arizona -- says he's really, truly, cross his stone-cold heart, going to run for the U.S. Senate.

Proving the pundits wrong, former Maricopa County sheriff Joe Arpaio formally announced on Tuesday that he is running for the U. S. Senate, making good on his recent comment to a reporter that he was “seriously considering” entering the contest for Arizona Republican Jeff Flake’s soon-to-be-vacated seat.

Skeptics — including this one — pooh-poohed the idea that the 85-year-old former lawman genuinely intended to become a candidate. On several occasions during his 24-year tenure, Arpaio, a Republican, suggested he might run for governor or U.S. Senate, only to weenie out.

I am running for the U.S. Senate from the Great State of Arizona, for one unwavering reason: to support the agenda and policies of President Donald Trump in his mission to Make America Great Again. https://t.co/ANppBdDOtp

In an interview with the Arizona Republic, Arpaio scoffed at the media types who predicted his trial balloon was a ploy to garner press and donations. And he dismissed the suggestion he might be too decrepit for the rigors of a contested GOP primary.

“I’ll outgun anybody running against me or otherwise,” Arpaio declared.

He added that he’s in it to support Donald Trump, the man who pardoned him in August, a month after Arpaio was convicted of misdemeanor criminal contempt for defying a judge’s order in the federal civil-rights case Melendres v. Arpaio.

When you see Joe Arpaio trending and hope its cause he died so you click on it pic.twitter.com/NsD9uA0apd

“I’d be a lot more concerned if I felt he was in it for the long haul,” Flake elaborated. “I don’t think he is. There has not been one election cycle since the early ’90s where Joe Arpaio hasn’t said that he’s thinking of running statewide.”

A rock-ribbed conservative whose stalwart criticism of Trump has made him an outcast in Arizona Republican circles, Flake said couldn’t see himself supporting Arpaio in a general election against a Democrat. Which is hardly surprising, given that Arpaio and Flake have long been political enemies.

So you are saying he isn’t really “running” for senate as much as he is attempting to “speed walk”… https://t.co/9gmKRZMsAi

As for his chances in the upcoming contest, Arpaio can certainly claim name recognition out the wazoo, but the guy’s got more baggage than JFK Airport after a bomb cyclone.

Among Arpaio’s many black marks: During his time in office, the sheriff was known for his vindictiveness and for targeting anyone who crossed him, including judges, rival politicians, ordinary citizens, and journalists — specifically, the owners of this publication, Michael Lacey and Jim Larkin.

The newspapermen earned Arpaio’s enmity from years of unrelenting investigative journalism about his agency, published in the Phoenix New Times, the alternative newsweekly they co-founded in 1970. Lacey and Larkin sold the paper, along with the rest of the Village Voice Media chain of newsweeklies, in 2012.

Arpaio targeted both men and had them arrested on bogus allegations in 2007. Following a public outcry, they were released. Lacey and Larkin sued, eventually winning a $3.75 million settlement, which they used to endow the Lacey & Larkin Frontera Fund, a nonprofit that supports immigrant rights.

“At 85, you have to hope that Joe Arpaio does not fall and break a hip on that slippery campaign trail. But at any age, he stands convicted of criminal contempt of court. He is a human rights abuser, and in my opinion, a cracker who singled out Mexicans and Mexican Americans, the very neighbors that make Arizona such a compelling place to live.”

(Lacey’s entire statement appears at the end of this story.)

In addition to his disdain for the Fourth Estate, Arpaio gained infamy for his jails, where suicides, beating deaths, and poor medical treatment flourished. The sheriff reveled in his reputation for brutality, once describing his open-air “Tent City” as his “concentration camp.”

Arizonans deserve leaders who work together to solve our country’s greatest challenges. Joe Arpaio is not that person. Together, we will defeat Sheriff Joe’s dangerous actions and tired rhetoric.

Arpaio’s office also botched hundreds of sex-crime cases, some of which involved minors, by virtue of conducting inadequate investigations or not investigating at all.

One year Arpaio misspent $100 million in jail funds, which had to be repaid from Maricopa County coffers.

Arpaio’s unlawful targeting of Latinos during high-profile sweeps in the Phoenix area brought on the ACLU’s lawsuit in Melendres.

Instead, Arpaio thumbed his nose at Snow, who would later find the sheriff guilty of civil contempt for his intransigence. Another judge found Arpaio guilty on criminal contempt charges arising from the case.

Before Arpaio could be sentenced, Trump pardoned him.

Taxpayers have had to foot the bill for Arpaio’s shenanigans over the years. Melendres alone has cost the county $70 million (so far).

That’s one reason voters in Maricopa County, where Republicans maintain a registration edge, kicked Arpaio to the curb in 2016, electing Democrat Paul Penzone, who bested the inumbent by 13 percentage points.

The results signal a rocky route to an Arpaio victory in a GOP primary.

Arpaio has never waged a statewide campaign. He likes to brag that he has never lost a primary. But that’s because after the first race, he was running for re-election on his home turf.

The remainder of the state is home to more moderate Republicans, who will cast a jaundiced eye at the ex-sheriff’s antics. And it hasn’t been long enough for Maricopa County voters forget what Arpaio has cost them: The board of supervisors had to raise property taxes to cover legal expenses in Melendres.

“I put out on Twitter, ‘It’s weekend at Bernie’s 30 years later,'” Sproul cracked when Front Page Confidential called. “It’s like: How much longer can someone prop this guy up? It’s like, ‘We promise you he’s still breathing, we know that he is.'”

Sproul thinks Arpaio’s entry into the race helps Arizona Congresswoman Martha McSally, who is expected to enter the GOP primary later this week.

For Arizona at least, McSally is considered a moderate and more likely to win a statewide primary. She also has the support of Senate Majority Leader Mitch McConnell, whose Senate Leadership Fund PAC will likely spend megabucks to get her elected.

Joe Arpaio's long history of racial discrimination and profiling, which led to his conviction for contempt of court, should disqualify him from public office. Another flawed candidate like Roy Moore. https://t.co/De1SPyfSgs

To the right of McSally in the GOP primary is Kelli Ward, a physician and former state senator. Ward ran against McCain in the 2016 Republican primary and got creamed, 51 to 39 percent.

Shortly thereafter, she announced her intention to challenge Flake. When Flake dropped out, it left Ward in the catbird seat, though not for long.

Ward is known as “Chemtrail Kelli” for once holding a forum in her legislative district on the conspiracy theory that the condensation trails left in the sky by airplanes are actually part of a government plot to poison Americans.

In other words, her supporters are Arpaio’s supporters. With them splitting the wingnut vote, McSally is well positioned to garner a plurality.

On the outside chance that Arpaio triumphs in the primary, the big winner will be Democratic Congresswoman Kyrsten Sinema, who has announced that she will run and is likely to win the Democratic primary.

After all, nothing helps turn out the vote like a villain.

“You thought Kelli Ward would have been a gift [to Sinema]?” Sproul posits. “They’re popping the Champagne bottles at Sinema headquarters today.”

In fact, Sinema tweeted out a comment about Arpaio’s candidacy not long after it was announced:

“Arizonans deserve leaders who work together to solve our country’s greatest challenges. Joe Arpaio is not that person. Together, we will defeat Sheriff Joe’s dangerous actions and tired rhetoric.”

But if Sproul is right and McSally becomes the nominee, Sinema’s cakewalk will be over before it begins.

The two candidates are evenly matched, and McSally, a former fighter pilot for the U.S. Air Force, will be able to pick off independents and even some Democrats who are not crazy about Sinema, a former lefty turned Blue Dog Democrat.

All that said, Arpaio’s senate candidacy still looks more like an excuse for the old codger to get out of the house. That and an opportunity for his campaign-finance guru Chad Willems to rake in cash sent in by old bigoted white folks around the nation who always contribute in droves for Arpaio’s campaigns.

Front Page Confidential reached out to Willems via Twitter, asking whether he’s running Arpaio just for the dough. He offered the following reply:

“I’m compensated for the work I do just like everyone else, presumably including you.”

Which, it should be noted, is hardly a denial.

At 85, you have to hope that Joe Arpaio does not fall and break a hip on that slippery campaign trail. But at any age, he stands convicted of criminal contempt of court. He is a human-rights abuser, and in my opinion, a cracker who singled out Mexicans and Mexican Americans, the very neighbors that make Arizona such a compelling place to live.

President Trump’s pardon merely underscores Arpaio’s depravity. And let’s not forget his unprecedented arrest of journalists — myself and Jim Larkin. When we revealed his instigation of a grand jury to silence us, he came to our homes in the middle of the night and jailed us. He misspent millions of dollars of taxpayer funds and routinely targeted public officials and judges who questioned his reign of law and order (sic!).

Isn’t there some tinhorn dictator who needs this disgraced retiree? Oh, wait…