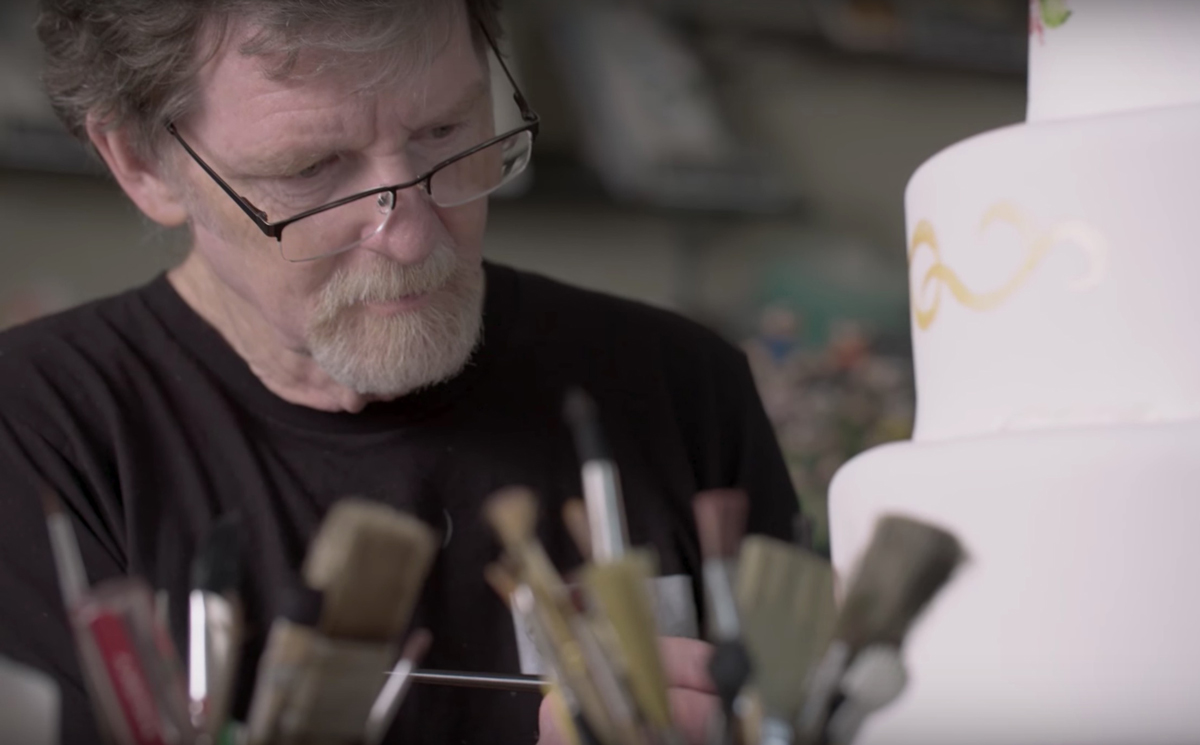 Jack Phillips, owner of Masterpiece Cakeshop in Lakewood, Colorado, refused to bake a wedding cake for a gay couple because their nuptials conflicted with his religious views (screenshot via YouTube)

A Colorado baker says his religious rights under the First Amendment outweigh civil-rights law. Which way will the U.S. Supreme Court tilt the balance?

In December the U.S. Supreme Court heard arguments in a case that is likely to have long-lasting implications on how future federal courts will interpret the First Amendment’s provision that protects religious rights.

In 2012, plaintiff Jack Phillips, the owner of a bakery in the Denver suburb of Lakewood, Colorado, refused to bake a custom wedding cake for a same-sex couple, instead offering to sell them a premade cake off his shop’s shelf. The couple, David Mullins and Charlie Craig, filed a complaint with the state civil-rights commission, which ruled in their favor. More legal jousting ensued, and now the Supreme Court will decide whether the commission violated Phillips’s First Amendment freedoms of expression and religious exercise.

Colorado Solicitor General Frederick R. Yargar, counsel for the commission, countered that Phillips’s business is a commercial entity open to the public. Therefore, he argued, it cannot invoke First Amendment protections in order to avoid otherwise generally applicable anti-discrimination ordinances. In this case those rights “extended to LGBT people the same protections used to fight discrimination against race, sex, and persons of faith.”

“What I design is…a message telling all who see it that this event is a wedding and that it is an occasion for celebration. In this case, I couldn’t.” — Jack Phillips, baker

The ensuing debate and questioning among the justices signified that there is deep division on the high court over whether the First Amendment’s religious and expression protections should supersede state anti-discrimination laws and other similar protections contained in later amendments to the Constitution (chiefly, the Fourteenth Amendment’s equal protection clause).

Ruth Bader Ginsburg and Elena Kagan, two of the court’s liberal justices, pressed the baker’s counsel as to where the line should be drawn between religious rights and discrimination. During questioning, the justices asked whether jewelers, florists, and hairstylists might also be permitted to claim protections under provisions of the First Amendment in order to refuse to serve certain customers.

“The person who does the floral arranging…would that person be speaking at the wedding?” asked Ginsburg, to which Waggoner replied in the affirmative — but only “if they are custom-designed arrangements.”

“How about the person who designs the invitation to the wedding or the menu for the wedding dinner?” Ginsburg pressed. “Certainly,” Waggoner responded.

Waggoner indicated that was possible, but that it wouldn’t be plausible for the hairstylist, make-up artist, wedding tailor, or chef to claim free-speech rights.

“Whoa,” interjected Kagan. “The baker is engaged in speech but the chef is not?”

“Justice [Sonia] Sotomayor also expressed concern that a rule where expressive speech trumps public accommodation laws against discrimination could have an impact on race discrimination and other civil rights laws,” attorneys Sam Schwartz-Fenwick and Michael W. Stevens note in a blog post on the website of the law firm Seyfarth Shaw.

Justice Anthony Kennedy, who normally is supportive of LGBT rights, pressed Yargar to explain precisely the opposite: whether enforcement of the anti-discrimination law was a de facto act of hostility toward Phillips’s religious convictions.

“[T]olerance is essential in a free society,” Kennedy said at one point. “And it is most meaningful when its mutual. It seems to me that the state in its position here has been neither tolerant nor respectful of Mr. Phillips’s religious beliefs.”

Donald Trump appointee Neil Gorsuch, the Supreme Court’s newest justice, asked the commission’s counsel if its anti-discrimination requirements are tantamount to compelled speech. In addition, he wondered whether a baker should be forced to serve a customer who sought a red cross in celebration of the Red Cross but also provide the same red cross to a member of the Ku Klux Klan.

In closing, Sotomayor noted that it is important for a society to implement public-accommodations laws as a way to combat discriminatory views and to promote an inclusive culture.

“[T]he problem is that America’s reaction to mixed marriages and to race didn’t change on its own. It changed because we had public-accommodation laws that forced people to do things that many claimed were against their expressive rights and against their religious rights,” said Sotomayor, adding that in America, if you open a business, “you open your door to everyone.”

“If you’re serving everybody except this one class of people because of race, gender or sexual orientation, there’s a harm there that the law recognizes.” — Chad Flanders, law professor

In a December 4 opinion column published in USA Today, Jack Phillips explained why he felt he could not design wedding cakes for same-sex couples. Noting that he is “happy to sell a cake to anyone” irrespective of “sexual identity” or “moral choices,” he said he could not create this particular cake.

“Designing a wedding cake is a very different thing from, say, baking a brownie,” Phillips wrote. “When people commission such a cake, they’re requesting something that’s designed to express something about the event and about the couple.

“What I design is not just a tower of flour and sugar, but a message tailored to a specific couple and a specific event — a message telling all who see it that this event is a wedding and that it is an occasion for celebration.

“In this case, I couldn’t. What a cake celebrating this event would communicate was a message that contradicts my deepest religious convictions, and as an artist, that’s just not something I’m able to do, so I politely declined.”

Added Phillips: “The two men who came into my shop that day were living out their beliefs. All I did was attempt to live out mine. I respect their right to choose and hoped they would respect mine. They did not.”

Many of the briefs filed in support of the same-sex couple argued a more emotional aspect of the case: Why would local, state, or federal governments condone such treatment of LGBT Americans?

Chad Flanders, a law professor at Saint Louis University who teaches a course on the First Amendment and religion, told the Deseret News that people who support Phillips argue that the First Amendment’s religious-rights protections override “hurt feelings.”

“But,” he noted further, “[the case] is also about equality. If you’re serving everybody except this one class of people because of race, gender or sexual orientation, there’s a harm there that the law recognizes.”

Observers of the case say however the justices decide, it will have major implications for both LGBT and religious rights.