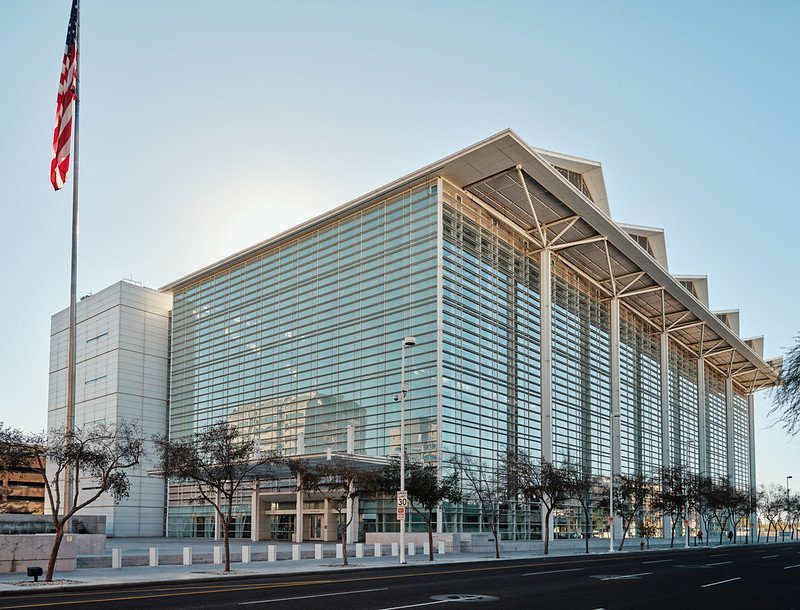 Award-winning journalists Michael Lacey and Jim Larkin — and their four co-defendants — have a long, hot summer in store for them next year.

During a brief status conference Wednesday morning in Phoenix, U.S. District Court Judge Diane Humetewa scheduled a “firm” date of June 20, 2023 for the defendants’ retrial on 100 counts related to the facilitation of misdemeanor state prostitution offenses in violation of the U.S. Travel Act, including money-laundering and conspiracy. The charges stem from Lacey and Larkin’s former ownership of the classified listings website, Backpage.com.

“We’re going to spend our summer in trial,” Humetewa announced, reserving dates next year from June 20 through the beginning of September, when temperatures well past 100 will turn the poorly-ventilated glass box of the Sandra Day O’Connor U.S. Courthouse in central Phoenix into a veritable oven.

Parties in the case recently suggested that the trial begin in late March or early April, but several attorneys have other trials around that time or later. Humetewa explained that by setting the date far in advance, she wanted to preclude further delays in a case that’s currently in its fifth calendar year.

“It’s my goal to bring this to finality with a trial,” Humetewa stated firmly.

Lacey and Larkin’s first trial in September 2021 was expected to last three months, but it ended in a mistrial due to prosecutorial misconduct after just eight days, when government attorneys defied Judge Susan Brnovich’s orders and repeatedly mentioned and elicited testimony regarding violent crimes that the accused are not charged with: sex trafficking, child sex trafficking and rape.

Brnovich ruled prosecutors had thereby poisoned the jury. She later recused herself without explanation, with Humetewa chosen by lot to replace her.

The fourth judge to preside over the case since its inception, Humetewa rejected a defense motion to dismiss the case for double jeopardy. The defense appealed to the Ninth Circuit, which in late September upheld Humetewa’s ruling.

Delays in the case have occurred due to the COVID pandemic as well as government shenanigans.

For instance, at the beginning of the case, prosecutors seized practically all of Lacey and Larkin’s assets, as well as lawyer trust accounts, via federal courts in California, in an effort to impoverish the defense and force them to battle on two fronts.

Additionally, defense attorneys have accused prosecutors of violating attorney-client privilege and abusing the grand jury process. The government also destroyed the most important piece of evidence in the case when it seized Backpage and dismantled it in such a way as to make reassembly nearly impossible.

All of these actions have cost the defense time and money since Lacey and Larkin were arrested by the FBI at gunpoint in April 2018, their homes raided and their families threatened.

Both men were held for more than a week before prosecutors would allow them to bail out on bonds of $1 million apiece. This, despite pretrial services recommending that they be released on their own recognizance.

Indeed, prosecutors in the Lacey/Larkin case have made sure, at every step, that “the process is the punishment,” to borrow a famous phrase.

Perhaps this is why government attorneys are in no rush to go to trial and why they are pursuing a strategy that ignores all of Backpage’s previous wins in federal and state courts, which consistently held that the content of adult-themed ads on the site for dating, escorts, massage, etc., were protected by the First Amendment and Section 230, the federal law that generally grants interactive websites immunity for content posted by users.

Ironically, one of the government’s own witnesses, an investigator for the California AG’s office, testified at the first trial that the ad content on Backpage was legal, that he could not make an arrest for prostitution based on it and that he knew of no one who had.

Jim Larkin’s attorney, Thomas Bienert, filed a request to withdraw from the defense team, telling the court that Larkin had dismissed his firm from the case.

At today’s hearing, Larkin told Judge Humetewa that he had begun looking for new counsel.

Prosecutors also informed Humetewa that Reginald Jones, the DOJ attorney who gave an inflammatory opening statement during the September trial, is no longer on the government’s team.

Prosecutors told Humetewa that Jones had been replaced by Austin Berry, a trial attorney with the DOJ’s Criminal Division’s Child Exploitation and Obscenity Section.

Jones was in the same department. Judge Brnovich, in her statement declaring a mistrial, noted that Jones’ opening statement was “close to causing a mistrial” in and of itself.

Which makes one wonder:

If Berry gives the opening statement in the second trial and takes a similar tack as Jones, is another government-caused mistrial inevitable?

That sound you hear is your tax dollars being sucked into oblivion.