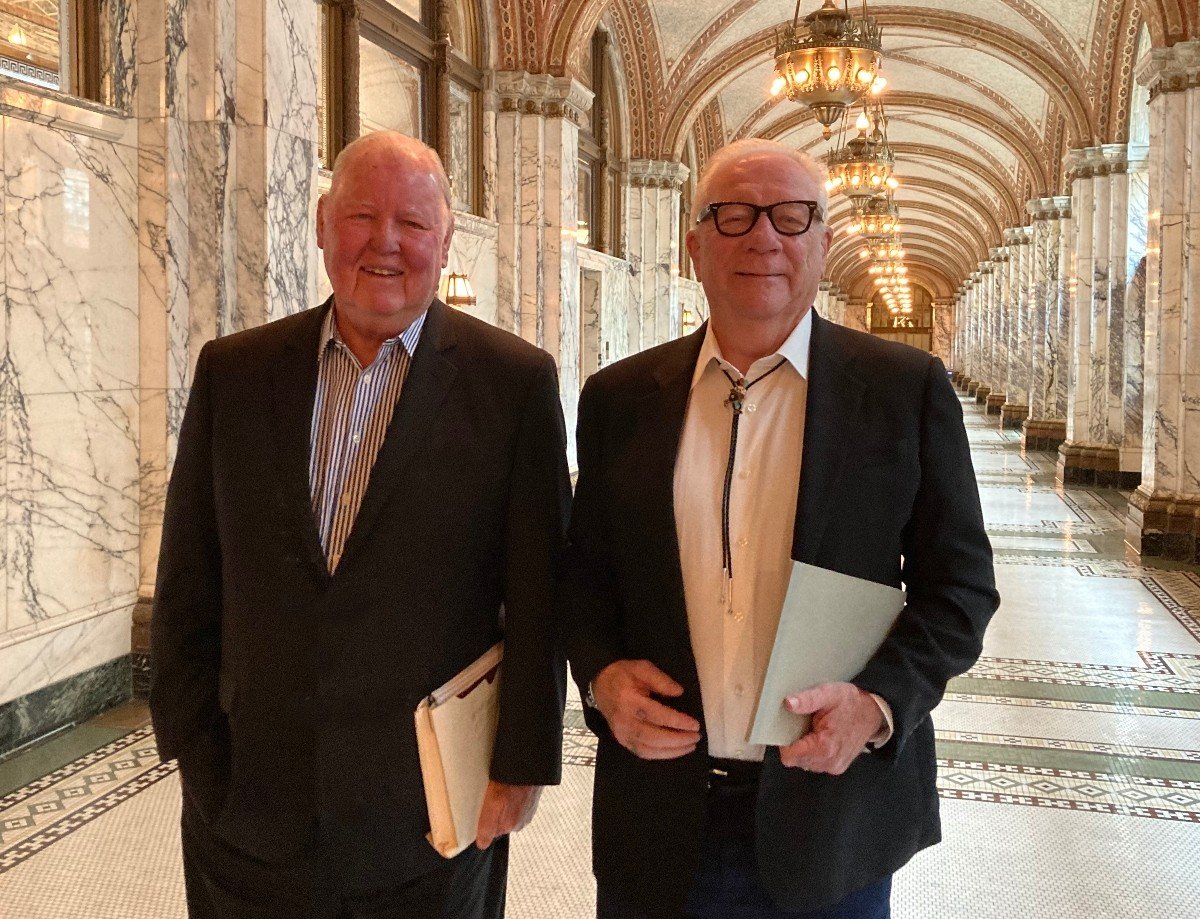 Jim Larkin (left) and Michael Lacey at the Ninth Circuit Court of Appeals in San Francisco on Sept. 2 (Stephen Lemons)

According to a joint status report filed Friday, all parties in the Lacey/Larkin case are suggesting that the 2023 retrial of Michael Lacey and Jim Larkin begin in late March or early April.

Sometime in late March or early April could mark the beginning in Phoenix of the biggest First Amendment trial in the nation — the retrial of famed journalists and former Backpage.com owners, Michael Lacey and Jim Larkin.

That is, if federal Judge Diane Humetewa, the fourth judge to sit on the case in the four-plus years since its start in April 2018, agrees to the recommendation. The suggestion came in a joint report filed Friday in advance of a pre-trial status conference scheduled for Wednesday, Nov. 2.

The memo states that government attorneys met and conferred with the defense on October 27 to discuss a trial schedule, as directed by the court. The filing gives a list of conflicts for different attorneys, stating that the defense’s “ability to commence trial” in late March/early April was conditioned upon three separate criminal trials having concluded by that time.

Despite this general agreement between the parties, the decision is Judge Humetewa’s to make.

Lacey, Larkin and four co-defendants face up to 100 counts related to facilitating misdemeanor state prostitution offenses in violation of the U.S. Travel Act, including money-laundering and conspiracy charges. The government seeks to hold them vicariously liable for the criminal acts of third parties unknown to the defendants, acts supposedly connected to legal, adult-themed advertisements posted to Backpage.com by the site’s users.

Previously, a series of federal and state courts found both the publication and content of such ads for massage, dating, escorts, etc. to be legal under federal law and presumptively protected by the First Amendment. The first trial of Lacey, Larkin, et al., which took place in Sept. 2021, was expected to last three months but ended in a mistrial after just eight days due to prosecutorial misconduct.

The trial judge, U.S. District Court Judge Susan Brnovich, found that the prosecution had repeatedly violated her orders by mentioning or eliciting testimony regarding heinous crimes Lacey, Larkin and the rest are not charged with and never could be charged with — sex trafficking and child sex trafficking.

Brnovich later recused herself for unknown reasons, with Humetewa replacing her.

Though Lacey and Larkin sold the company in 2015, the government has made clear that, above all, it wants their scalps nailed to the wall for their previous assertions of their Constitutional rights.

The feds have seized practically all of their assets, including millions of dollars in attorney trust accounts, in order to starve their defense. Both men were arrested at gunpoint, their homes raided by the FBI, their family members terrorized.

Though pretrial services suggested that both men be released on their own recognizance, the prosecution only agreed to their release on bonds of $1 million a piece.

For going on five years, they’ve been forced to wear ankle monitors and must ask permission to leave Maricopa County.

An attempt to have the case dismissed was denied by Humetewa and later failed on appeal.

The first trial prominently featured the testimony of a government witness — a California cop — who reviewed Backpage’s adult ads in 2015 as part of a failed prosecution of Lacey and Larkin by then Cali AG Kamala Harris.

The cop, an investigator for Harris’ office, admitted under cross-examination that the content of the adult ads he reviewed on Backpage was legal on its face. He had never made an arrest for prostitution based solely on the content of the ads, knew of no one who had, and conceded that he could not do so.

And yet, the government’s vendetta against Lacey and Larkin rolls on, at untold cost to the U.S. Treasury.