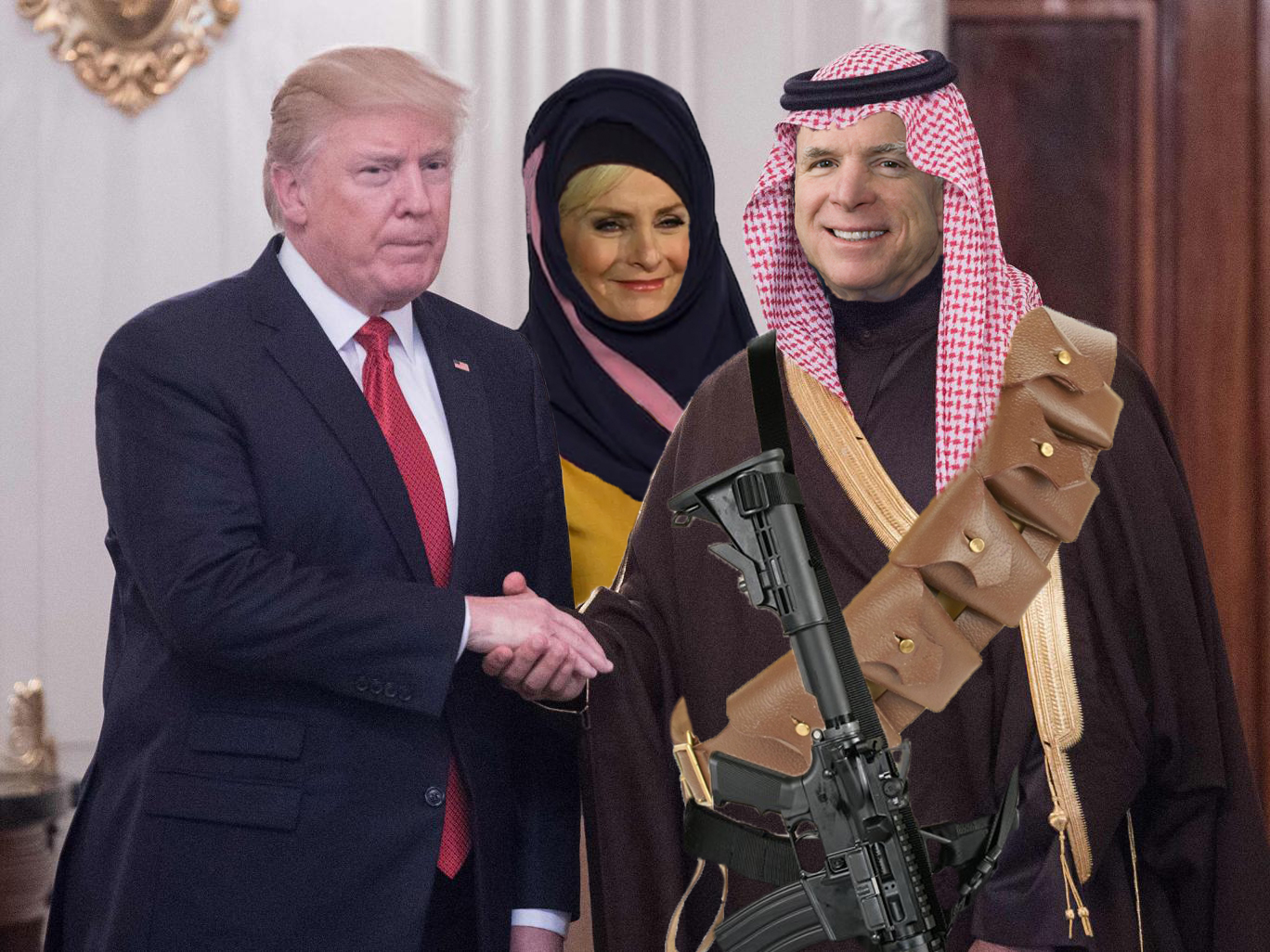 In light of Jamal Khashoggi's alleged murder at the hands of Saudi government henchmen, will the McCain Institute divest itself of the $1 million it accepted from the Saudis in 2014?

In light of the disappearance and increasingly apparent ghastly murder of Washington Post columnist Jamal Khashoggi at the hands of a Saudi hit squad, will the McCain Institute for International Leadership cut its ties with Saudi Arabia and divest itself of the $1 million donation it accepted from the Saudi embassy in 2014?

Representatives of the McCain Institute have not responded to Front Page Confidential ‘s phone calls and emails asking that very question. But the institute, which is named for the late Arizona Sen. John McCain and holds itself out as a champion of human rights and democracy worldwide, did recently offer a general comment on the Khashoggi affair via social media.

In a statement tweeted on October 9, the McCain Institute called Khashoggi’s disappearance “a deeply concerning indicator of Saudi Arabia’s disregard for human rights.” The statement also emphasized the importance of a free press and exhorted that “Leaders of the West…must push for answers” about Khashoggi’s fate.

The mildly worded message seems ill-matched to the mystery that surrounds the 60-year-old Saudi journalist and dissident. Khashoggi, a U.S. resident, walked into a Saudi consulate in Istanbul on October 2 to obtain paperwork certifying a recent divorce. His new fiancée waited outside the building, but Khashoggi never emerged from the consulate.

News reports citing unnamed Turkish and U.S. officials have alleged that a team of Saudi assassins killed the journalist, then dismembered his body with a bone saw. Security video said to have been captured outside the consulate shows Khashoggi entering the building, but not exiting.

Saudi officials have denied that their country had anything to do with Khashoggi’s disappearance, saying he left the consulate from another door. But news outlets are reporting that the Saudis may issue a report claiming the death was an accident that occurred during an interrogation that had been intended to end with Khashoggi being spirited back to Saudi Arabia, alive.

In the two weeks since the dissident’s disappearance, the Saudis have reaped a whirlwind of near-universal condemnation.

Business leaders, tech moguls, and media execs have bailed out of attending the Future Investment Initiative, also known as “Davos in the Desert,” a global investment forum to be held October 23–25 in Riyadh, Saudi Arabia’s capital. And on October 18, U.S. Treasury Secretary Steven Mnuchin announced that he would skip the high-powered conference.

The summit, now in its second year, is hosted by Crown Prince Mohammad bin Salman, heir to the Saudi throne that is currently occupied by his father, King Salman.

Will the Khashoggi case be the downfall of Saudi Crown Prince Mohammed bin Salman? https://t.co/Y2Ax7Wlb6R via @ReutersOpinion pic.twitter.com/UYUpETfokW

As New York Times media columnist Jim Rutenberg reported, fallout from the Khashoggi incident has ripped back the PR façade the Crown Prince created during a “charm campaign” tour of the U.S. six months ago. The leader often referred to as MBS sold himself as reformer, the man responsible for giving Saudi women the right to drive and for lifting a 35-year ban on commercial movie theaters.

But the reality of Saudi Arabia’s horrific human-rights record — which includes beheadings, the imprisonment and torture of dissidents, the repression of women and religious minorities, and the bloodshed of innocents as a result of the county’s military involvement in Yemen — has reared its gruesome head with the slaying of Khashoggi.

Even President Trump has expressed outrage over the Khashoggi affair, deeming it “really terrible and disgusting” in an interview with 60 Minutes reporter Leslie Stahl that aired Sunday, October 13.

“We’re going to get to the bottom of it, and there will be severe punishment,” vowed Trump, while at the same time expressing concern that a deal wherein the Saudis have promised to purchase $110 billion in military equipment from the U.S. might go to another country.

Which brings us back to John McCain.

It was John McCain who helped shepherd that arms deal through Congress. The same John McCain who was a steadfast supporter both of Saudi Arabia’s bloody intervention in Yemen. The same McCain who, in June 2017, joined 52 fellow senators in opposing a measure that would have cut into the arms sale.

The measure was sponsored by McCain’s fellow Republican, Rand Paul, who accused the Saudis of creating a “humanitarian crisis” with its war in Yemen. Indeed, the United Nations has urged the Saudi-led coalition to end its bombing campaign in Yemen, accusing it of war crimes and targeting civilians.

That is merely one of many instances in which McCain carried water for the kingdom in Congress.

Earlier this year Front Page Confidential published The Stains of John McCain, an ebook that devotes an entire chapter, “Sweetheart of Saudi Arabia,” to the late legislator’s love affair with his Arab benefactors.

Another repugnant example: In November 2016, McCain backed an amendment to a new law that allowed U.S. citizens to sue state sponsors of terrorism. Earlier that year, McCain had voted in favor of the law, which Congress passed over President Obama’s veto. Months later, he was doubling back with a purported “fix.”

In fact, that “fix” would have hampered the prospects of a federal lawsuit filed in 2017 by family members of hundreds of victims killed on 9/11. The suit alleged that Saudi Arabia “raised, laundered and paid substantial financial support to al-Qaeda,” including preparations for the 9/11 attacks. To back the allegation, the complaint pointed to a now-declassified congressional report , which found that the Royal Embassy of Saudi Arabia might have gone so far as to bankroll what one analyst called a “dry run” for the attacks.

McCain’s effort was met with howls of indignation and went nowhere.

Notably, the Saudi government agency that dropped $1 million into the McCain Institute’s coffers in 2014 just happens to be the Royal Embassy of Saudi Arabia, which the institute thanks on its website, alongside other donors who ponied up “$100,000 and above.”

That $1 million contribution has always emanated a stench of hypocrisy. The same year the McCain Institute accepted the money, Saudi Arabia was on a U.S. State Department “blacklist” of nations that failed to meet minimum requirements to fight human trafficking.

Though Saudi Arabia was removed from the blacklist the following year, in 2016 the State Department issued a report that labeled the kingdom “a destination country for men and women subjected to forced labor and, to a lesser extent, forced prostitution.” The agency reiterated the assessment in similar language in 2018.

My deepest condolences to the family of Senator @SenJohnMcCain. America lost an American hero and I lost a personal friend I have known for more than thirty years. May his soul Rest In Peace

Following her husband’s death, Cindy McCain declared in a USA Today op-ed that the institute “is now my home, and my mission.” As if in fulfillment of that statement, on October 18, the institute announced that its board of trustees had elected Cindy McCain to be its new chair.

The Saudi donation to the institute has always been controversial. When a Phoenix reporter confronted John McCain about the endowment in 2016, the senator attempted to distance himself from the nonprofit, claiming that he had “nothing to do with” the institute, other than lending it his name.

In fact, however, McCain had everything to do with the institute, which is part of Arizona State University. In 2012, the senator jump-started the institute with nearly $9 million left over from his failed 2008 presidential campaign. Over the years, photos from the McCain Institute, including images from the Sedona Forum, its signature annual event, reveal McCain to have been deeply involved with the think tank’s activities.

One of the many political and business luminaries who attended the April 2015 Sedona Forum was Adel al-Jubeir, who at the time served as Saudi ambassador to the United States. That same month, al-Jubeir was promoted to the post of Saudi foreign minister, a position he still holds. The Sedona Forum website indicates that al-Jubeir participated in a panel discussion, “Dealing with ISIS” — an eyebrow-raising venue, given Saudi Arabia’s role in exporting Islamist extremism worldwide.

When McCain died from brain cancer on August 25, 2018, al-Jubeir was one of many in Saudi Arabia to offer his condolences. In a tweet, al-Jubeir hailed McCain as “an American hero” and a “personal friend.” Riyadh’s English-language daily, the Arab News, referred to the senator in an obituary as “a great friend of Saudi Arabia.”

Though the McCain Institute hasn’t been taking Front Page Confidential‘s calls in recent days, the organization was more forthcoming earlier this year.

In February, in response to questions about the Saudis’ 2014 gift, McCain Institute spokesman Luke Knittig told Front Page Confidential that the Saudi donation was “given without restrictions” and had been earmarked by the institute to assist in its humanitarian mission.

Asked about the apparent hypocrisy of taking money from a brutal, anti-democratic regime implicated in the spread of religious extremism and terrorism across the globe, Knittig offered only that, “They can do better. We’d love to help them do better.”