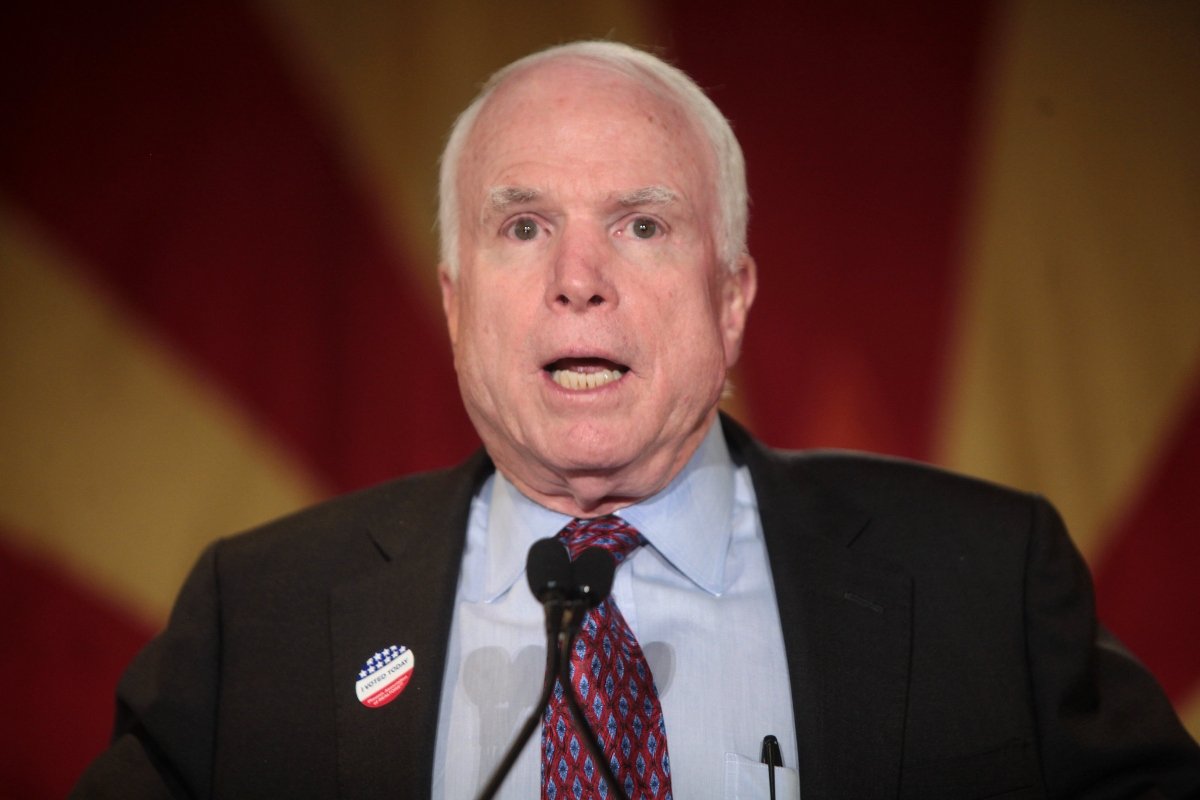 The McCain Institute's "We Hold These Truths" campaign claims to honor the late senator by promoting human rights, but a $1 million Saudi donation and McCain's checkered record belies the propaganda.

Since its founding in 2012, the McCain Institute for International Leadership at Arizona State University, has proved an endless font of hero-worship and hypocrisy, spewing forth a never-ending stream of bilge about the legacy of the politician whose name it bears, U.S. Senator John McCain, who died on August 25, 2018 from brain cancer at the age of 81. The latest effort to maintain the value of the McCain brand is an insincere campaign to highlight the cause of human rights, which the institute has dubbed, “We Hold These Truths.”

An emailed ad sent from the institute informs the reader that the new cause “intends to bring human rights to the heart of political discourse and protect our freedoms.” Accompanying it is a short schmaltzy video filled with what look like stock images and a recording of John McCain’s voice advising listeners that, “This shared devotion to human rights is our truest heritage and our most important loyalty.”

The ad links to the campaign’s website, weholdthesetruths.org, where there’s plenty of similar, mostly-meaningless propaganda hailing the importance of human rights. A press release issued by ASU quotes McCain Institute executive director and longtime McCain crony, Kurt Volker, former ambassador to NATO, explaining that We Hold These Truths will work with “partner organizations and supportive individuals” to “secure the understanding and practice of human rights the country and world sorely needs.”

Concludes Volker, “[I]t doesn’t get more McCain-like or noble than that.”

The use of the words “noble” and “McCain” in the same sentence should cause your cant-detector to self-combust. Before liberal media elites bestowed a halo upon him for drawing the ire of our Orange Caligula, McCain was correctly regarded as a self-aggrandizing, Janus-faced warmonger. The idea that he cared more about human rights than hobnobbing with rich sheiks is both repulsive and risible.

In fact, the Mac’s record puts the lie to the institute’s revisionist attempt to paint the deceased senator as an advocate for the better treatment of his fellow man.

Consider McCain’s affinity for the House of Saud, the barbaric, bloodthirsty ruling family of Saudi Arabia, before which McCain prostrated himself throughout the entirety of his career.

Despite Saudi Arabia’s deadliest export, the extremist ideology of Wahhabism, despite the nation’s involvement in the attacks on 9/11, with 15 of the 19 hijackers hailing from that country, and despite the brutality of a regime that finances terrorism abroad, engages in ongoing atrocities against civilians in Yemen as well as against its own people, McCain carried water for these corrupt killers, making sure that the flow of billions of dollars in U.S. arms to the country was never impeded by concern over the Saudis’ contempt for human rights.

In 2014, McCain’s namesake non-profit accepted a $1 million donation from the Royal Embassy of Saudi Arabia, money it hardly needed, because the institute itself was initially bankrolled by the Senator with $9 million left over from his failed 2008 presidential bid.

In 2015, McCain welcomed his old friend Saudi Ambassador Adel al-Jubeir at the Sedona Forum, an annual gathering of political, military and financial kingpins hosted by the institute. When McCain died, al-Jubeir, now Saudi Arabia’s Minister of State for Foreign Affairs, mourned McCain’s passing, calling him a “hero” and a “friend.”

More recently, al-Jubeir has helped peddle the kingdom’s whitewash of the brutal slaying and dismemberment of Washington Post columnist Jamal Khashoggi, a critic of his homeland’s rulers.

The Saudi regime treats women like chattel and flogs, jails and publicly beheads dissidents en masse. It regularly engages in war crimes and condones human trafficking. Accused individuals are tortured into confessing. There is no freedom of speech, assembly, or religion in that country. In fact, there is very little freedom at all. And yet, the McCain Institute keeps its Saudi blood money while promulgating its big lie about McCain and human rights.

Map: All The Countries John McCain Has Wanted to Attack: http://t.co/2zm0NL4ULG pic.twitter.com/w221JBte7O

McCain never showed much remorse for dropping bombs on the North Vietnamese, the activity which led to him being shot down and held captive for five and a half years. He remained a firm believer in the Vietnam War and many others, in which civilians inevitably suffer from chaos, death and destruction.

In 2013, Mother Jones mapped out fourteen nations McCain had, over time, wanted to “bomb, invade, or destabilize.” Among them was Iran, long an enemy of McCain’s pal, Saudi Arabia. One of the more egregious examples of McCain’s enduring bloodlust for Persia came as he was campaigning for president in 2008 and performed on stage in South Carolina his spoof of the surf-rock classic “Barbara Ann,” singing,  “Bomb, bomb, bomb, bomb [Iran]”?

There was at least one nation the magazine missed: Nicaragua. In the 1980s, the U.S. funded a coalition of right-wing paramilitary groups called the Contras in an attempt to overthrow Nicaragua’s Cuban-backed Sandinista regime. The Contras committed widespread human rights abuses during its decade-long bout with the Sandinistas, including documented accounts of torture, rape and murder. The group was also accused of trafficking in narcotics to support its cause.

A fervent anti-communist, McCain supported the U.S. proxy war in Nicaragua and regularly stood in opposition to Congressional attempts to circumscribe U.S. military assistance to the rebel force. He personally donated a token amount of $400 to the Contras, according to a 1988 report from The New York Times. And in 2008, the AP documented McCain’s ties to a group that helped the Reagan White House evade Congressional restrictions on military aide to the Contras. The scandal, known as the Iran-Contra affair, involved the U.S. secretly selling arms to Iran and using that money to bolster the rebels in Nicaragua.

McCain has also backed U.S. involvement in Yemen on behalf of the Saudis, called on the Obama White House to provide lethal military aide to Ukraine in its conflict with Russia, and in 2009 met with, of all people, Muammar Gaddafi in Libya and promised to supply the socialist dictator with  lethal and non-lethal military goods in exchange for Libya’s giving up weapons of mass destruction. As reported in Politico, the meeting was discussed in a U.S. diplomatic cable published by Wikileaks.

Alas, in 2011, Gaddafi, a financier of global terrorism, was captured and killed by opponents during the Libyan civil war, a consequence of the Arab Spring.

Of all McCain’s death-dealing militarism, the worst by far was his tireless cheerleading for the 2003 invasion of Iraq, which led to the destabilization of the Middle East and the alarming rise of the Islamic State of Iraq and Syria (ISIS).

More than 4,500 U.S. military personnel and hundreds of thousands of Iraqis perished in the catastrophic crusade that ensued. Only on his deathbed did McCain own up to his part in this epic disaster, writing in his 2018 memoir, The Restless Wave, that the Iraq invasion was, “a mistake, a very serious one” and shouldering “my share of the blame.”

It’s understandable that an institute dedicated to venerating a colossal hypocrite would itself engage in widespread hypocrisy, but it doesn’t mean the public should swallow such swill. McCain gave lip service to human rights when it burnished his image or fulfilled his agenda. Otherwise, victims of state repression could go pound sand, as far as the supposed “Maverick” was concerned.

If the McCain Institute’s minions disagree, perhaps they could prove the contrary by setting up a storefront in downtown Riyadh and see how far they get selling their We-Hold-These-Truths flim-flam to the Saudis.

Note: Front Page Confidential reached out to a spokesman for the McCain Institute for comment, but has yet to receive a response. 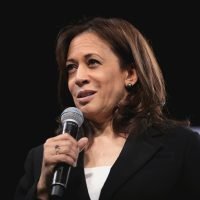 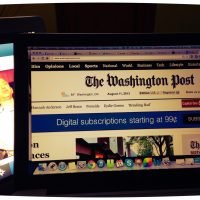 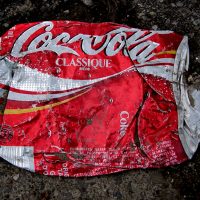