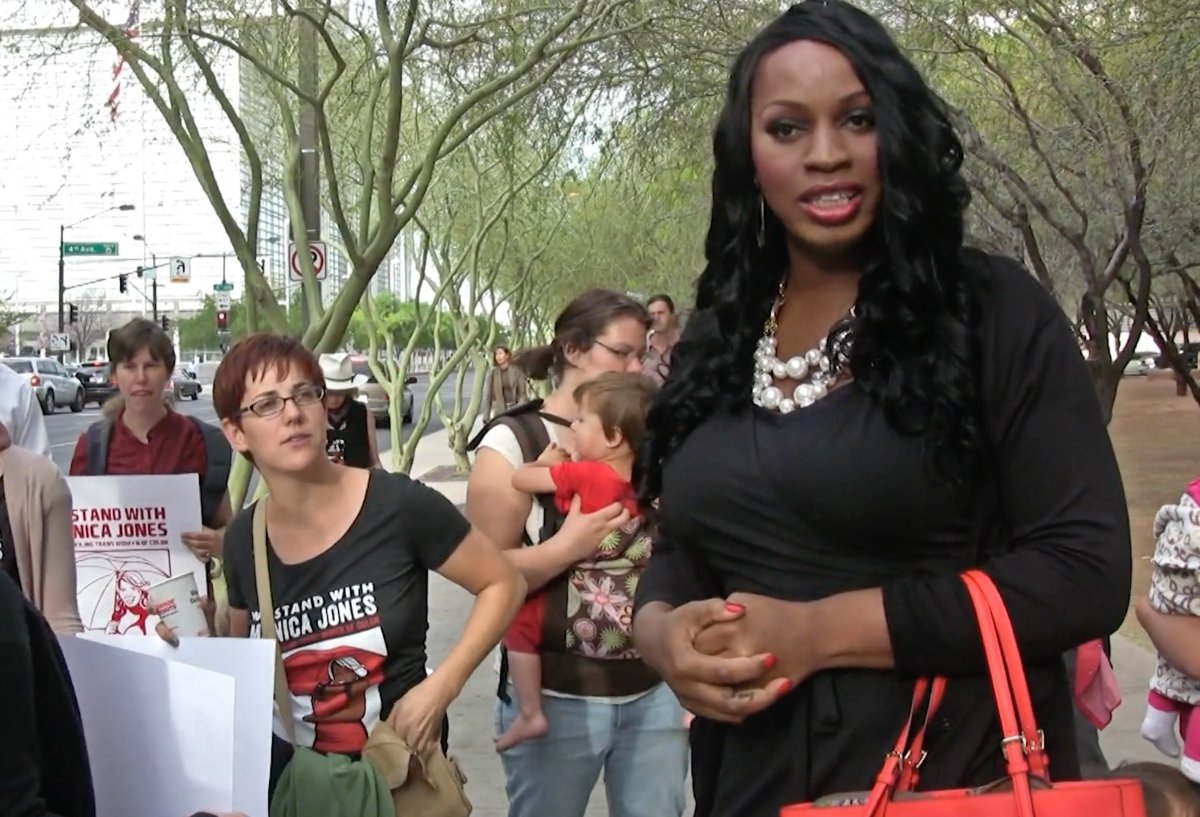 Monica Jones, with supporters in Phoenix, a screenshot from the upcoming documentary by PJ Starr (courtesy, PJ Starr)

At the first glimpse of anti-sex work researcher Dominique Roe-Sepowitz on screen, a round of boos erupted from the audience at Tucson’s Screening Room on Friday, where they were watching a preview of director PJ Starr‘s upcoming documentary, Manifesting Monica Jones.

The preview was one of 12 short films shown as part of the 20th annual Tucson Sex Workers Arts Festival, organized by filmmaker Julianna Piccillo, a former sex worker and co-founder of the Tucson chapter of the Sex Workers Outreach Project (SWOP).

The two-day festival, which ran November 18-19, featured an array of brilliant filmmakers and subjects from around the world. Starr’s preview was the only one to garner both cheers and boos, though the boos were for Roe-Sepowitz, not the subject of the documentary: trans-rights icon Monica Jones.

I should explain that Roe-Sepowitz is an associate professor at Arizona State University’s School of Social Work, where she’s drawn the ire of sex workers by conflating “sex trafficking” with sex work and producing dubious anti-trafficking research funded by the McCain Institute. Roe-Sepowitz also helped create the infamous Project Rose, a diversion program in which sex workers were coerced to participate after being arrested by Phoenix police.

Jones’ activism shined a light on the program, which earned criticism from the ACLU and other civil rights organizations. Part of Starr’s clip shows Jones preparing for a court date in Phoenix with the help of Cris Sardina, director of the sex-worker-rights advocacy group, Desiree Alliance.

A Phoenix vice cop arrested Jones in 2013 as she was walking to a local bar. The charge? “Manifesting an intent to commit or solicit an act of prostitution,” a misdemeanor under the Phoenix City Code that can involve someone who “repeatedly beckons to, stops or attempts to stop or engage passersby in conversation,” or “repeatedly, stops or attempts to stop, motor vehicle operators by hailing, waiving of arms or any other bodily gesture.”

Jones’ “crime” was accepting a ride from an undercover officer, who reportedly attempted to solicit a sexual act from her. When Jones declined, she was arrested and taken to Project Rose, where she was released without participating. Later, the city hit her with the “manifesting” charge by mail.

In Starr’s documentary, Jones explains that the day before her arrest, she had protested Project Rose outside the Bethany Bible Church where it took place. A reporter asks if Jones believes her arrest was in retaliation for protesting Project Rose and for advocating for the decriminalization of prostitution.

Jones answers in the affirmative. She also mentions that she had spoken to Roe-Sepowitz a couple of weeks before her arrest, expressing her opposition to Project Rose.

During a Q&A on Friday, Jones described her encounters with Roe-Sepowitz, explaining that she sought out the professor for a discussion after hearing that Roe-Sepowitz was “doing some fucked up shit.”

Jones remembered she “had a sit-down interview with Roe-Sepowitz,” wherein the professor asked her to “come volunteer,” an offer Jones rejected.

“I was like, ‘No, what you’re doing is wrong . . . the things that you’re doing [are] really harmful,” Jones said. She told Roe-Sepowitz that if she wanted to help sex workers, the professor should “go pass out condoms” and make sure sex workers had a safe place to work.

(Roe-Sepowitz did not immediately return a call and an email from Front Page Confidential, asking for a comment on Jones’ recollections. Lest you think that I have exaggerated Roe-Sepowitz’s opposition to sex work, please see her comments to me in this 2018 piece.)

Jones’ case drew the involvement of the ACLU, which slammed both Phoenix’s “walking while trans” statute and Project Rose. Jones became an overnight sensation, with local, national and international outlets covering her trial. Among sex workers, her name remains a battle cry.

In 2014, a Phoenix court convicted Jones of “manifesting.” A superior court judge later vacated the conviction, concluding that Jones had not received a fair trial. The ACLU’s challenge to the city’s “walking while trans” ordinance was unsuccessful, but the controversy around Project Rose finally led to the project’s demise, with the Phoenix Police Department quietly shelving it.

Director Starr’s previous documentary, No Human Involved, told the infuriating tale of Marcia Powell, a 48-year-old mentally-ill woman who died in an Arizona prison after being left in an open-air cage without water in triple-digit heat. Powell was doing time for prostitution, normally a misdemeanor. But with three previous convictions for the same offense, it becomes a felony. This happened in Powell’s case, with a horrifying outcome.

At Friday’s Q&A, Starr mentioned that she had recently received a fellowship to work on the film full-time. Manifesting Monica Jones should be complete sometime in 2023, she promised.

The festival included a retrospective of clips from previous festivals, including footage of renowned sex-workers-rights advocate Carol Leigh, the self-dubbed “Scarlot Harlot,” famous for coining the phrase “sex worker” and inspiring legions of activists. Leigh died, age 71, two days before the festival began. Those in attendance acknowledged her as a mentor.

“What we’re seeing now is the government trying to control the entirety of the motherfuckin’ internet. Well, good luck on that . . . the internet is too vast.” –Cris Sardina, Desiree Alliance

The short films in the two-day program often dealt with battling the stigma associated with sex work, including two shorts from the Sex Workers Project-Urban Justice Center, which interviewed sex workers and their families, offering positive views of sex work as a profession. Similarly, Juliana Piccillo’s autobiographical I Was a Teenage Prostitute offered a heartfelt and brutally honest assessment of her time working in a massage parlor.

All of Me by Josie Hess & Morgana Muses introduced the fascinating story of Australian cam girl/sex worker Melinah Viking, who suffers from cerebral palsy and finds empowerment through the online — and sometimes in-person — gaze of her followers. Viking is an absorbing personality with a fierce resolve to express herself sexually in the face of society’s hostile expectations.

This caterwauling was occasionally interrupted: sometimes by a witchy, lesbian coven where menstrual blood is the liqueur of choice. According to the program, Beatty’s film is a “queer retake on the tale of Lilith.”

In addition to the films, there was much discussion during the gathering of the change over the last 20 years in how sex work is perceived. Many at the festival bemoaned the ongoing anti-trafficking panic, which resulted in FOSTA/SESTA and a war on sex workers.

Desiree Alliance’s Sardina said she spends “a great deal of my time as a director refuting the trafficking narrative,” which she believes is mainly intended to instill fear in the population, while big anti-trafficking non-profits hoover up donations.

However, Sardina seemed to think that the sex-trafficking narrative will ultimately fail. She observed that the FBI’s own statistics refute the supposed ubiquity of sex trafficking.

“I mean, we’ve had fear tactics forever, and with technology what we’re seeing now is the government trying to control the entirety of the motherfuckin’ internet,” she said, adding, “Well, good luck on that . . . the internet is too vast.”