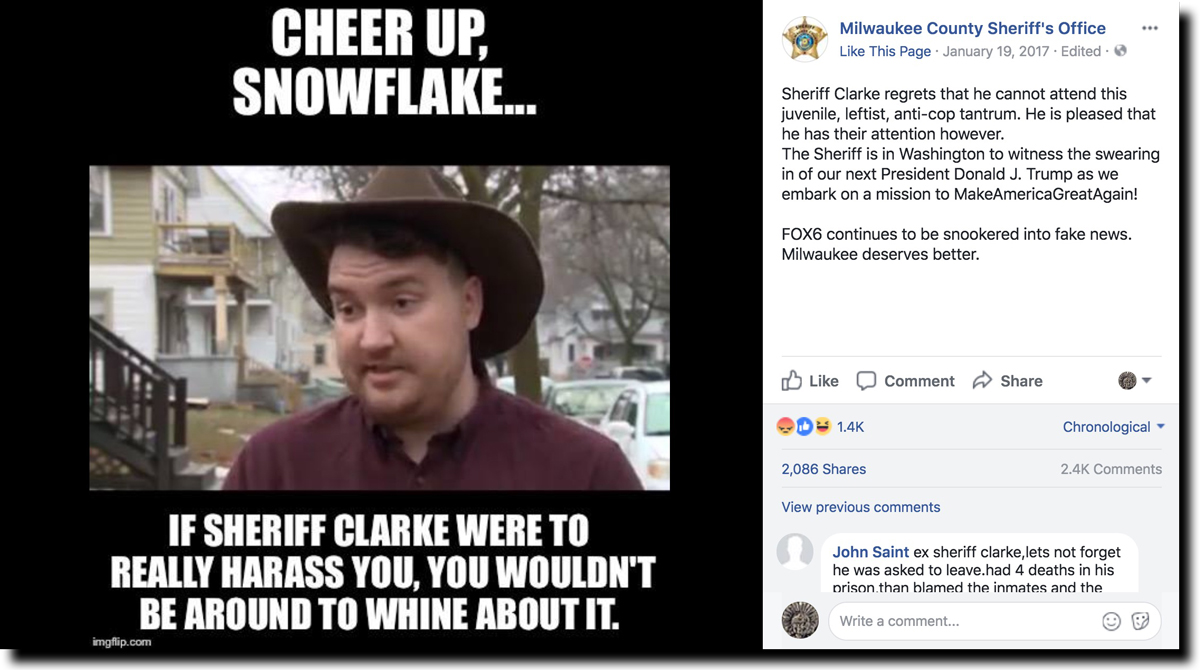 David Clarke said and did some pretty controversial stuff as sheriff of Milwaukee County, Wisconsin. Now he's on trial for an allegedly threatening meme he posted on Facebook in early 2017.

UPDATE:  On January 22, a federal jury in Milwaukee found in favor of former county sheriff David Clarke. After deliberating for about three hours, the jury of five women and two men found that plaintiff Dan Black had failed to prove Sheriff Clarke’s Facebook posts violated Black’s First Amendment rights by intimidating him to the point that it was unlikely that he’d express his opinions in a similar fashion in the future. Black had filed a civil suit against Clarke in federal court.

When it comes to speaking his mind, former Milwaukee County Sheriff David Clarke has never been bashful. But a comment — actually, a meme — he posted online in response to a detractor has crossed a line for one federal judge, and the case will go to trial Monday, January 22.

It began a year ago, when Clarke and petitioner Dan Black boarded the same flight from Dallas to Milwaukee. According to published reports, Black thought he recognized Clarke in first class, wearing gear depicting the NFL’s Dallas Cowboys football team.

When Black asked if the man in first class if he was David Clarke, the sheriff answered affirmatively. Black shook his head and walked to his seat in coach, according to reports.

After the plane landed, six sheriff’s deputies greeted Black at the gate, where Clarke ordered them to take him aside and question him. They did so, and then escorted him from the airport.

Black posted about the incident on social media and filed a complaint with Milwaukee County. In response, Clarke posted a meme on the Milwaukee County Sheriff’s Office Facebook page that consisted of a photo of Black and text that read, “Cheer up, snowflake…if Sheriff Clarke were to really harass you, you wouldn’t be around to whine about it.”

Black filed a lawsuit, alleging that Clarke and his deputies violated his First Amendment rights, his Fourth Amendment right against unreasonable search and seizure, and his right to due process under the Fourteenth Amendment. The suit seeks to hold the county liable for the sheriff’s department’s actions.

“A reasonable sheriff deputy would have known that it is unlawful to stop, arrest and interrogate a citizen to investigate their political opinions,” Black’s complaint reads.

Text messages provided to the court in Black’s filing show Clarke instructing one of the deputies that there should be “no arrest unless he becomes an asshole with your guys.”

Another text: “Question for him is why he said anything to me. Why didn’t he just keep his mouth shut. Follow him to baggage claim and out the door.”

Court documents also note that an email sent from the account dcclarkecowboy@gmail.com to a Clarke subordinate after the complaint was filed said Black “can go to hell.”

“The next time he or anyone else pulls this stunt they may get knocked out,” the email further stated.

A Milwaukee native whose controversial views gained him national prominence during his fifteen-year tenure, Clarke ran for office as a Democrat. But the Stetson-hatted African-American sheriff soon became a conservative media darling. He disavowed the Black Lives Matter movement as a hate group. And while he was being touted as a potential pick to head the Department of Homeland Security under Trump, he called for the suspension of habeas corpus in the U.S. on the podcast he hosted on Glenn Beck’s radio network, The Blaze.

Clarke, 61, resigned his post as sheriff on August 31, 2017, amid his fourth term. The Milwaukee Journal-Sentinel reported soon after that Clarke would be joining the primary Political Action Committee supporting Trump.

Earlier this month, U.S. District Judge J.P. Stadtmueller granted Clarke’s motion for summary judgment on the Fourth and Fourteenth Amendment claims, as well as one of Black’s First Amendment claims, dismissing them as “completely without merit.” The judge also dismissed the claim against the six deputies, all of whom are identified in the complaint as “John Doe.”

“While Clarke’s actions reflect poor judgment, they do not shock the conscience” in a way that would support a due-process claim, Stadtmueller wrote. The judge ruled that questioning Black for fifteen minutes did not constitute an illegal seizure because the deputies never drew their weapons and used friendly language and did not intend to arrest or ticket Black.

But Stadtmueller ruled that a jury should decide whether Clarke’s meme, which continues to reside on the sheriff’s office’s Facebook page, amounts to a form of intimidation or threat that can be considered retaliation against Black.

Reached via email, Black’s attorney William Sulton told Front Page Confidential he had no comment. (On the eve of trial, Sulton withdrew from the case, citing a conflict of interest that had arisen. Sulton’s mother, a civil-rights lawyer, took over Black’s case.)

At first blush, it would seem as though Clarke misused his authority, and indeed, the FBI believed so as well. The bureau opened an investigation into Clarke’s actions to determine whether he’d violated Black’s civil rights, and an agent stated in a search warrant application that his preliminary investigation “articulates a factual basis that reasonably indicates the existence of federal criminal activity.”

The warrant application noted that the county’s own investigation found “credible” evidence to suggest Clarke behaved “in excess of his lawful authority to direct his deputies to stop and question Black without legal justification.”

That said, Clarke is a noted media figure, an avid supporter of President Donald Trump who has made scores of appearances on cable networks. His law-and-order approach and brusque verbal jousting with opponents has earned him a number of death threats. In fact, Milwaukee County spends hundreds of thousands of dollars to provide security for Clarke owing to the threats, some of which are racially tinged. That has led some to argue that his outsize reaction to Black is just his way of ensuring his own safety, even if it seems aggressive to others.

Either way, the case would appear to be no slam-dunk for the jury. The U.S. Supreme Court ruled in 2015 that even violent, threatening speech — as in threats of murder and references to school shootings — is protected under the First Amendment if the threats aren’t deemed credible.

“Federal criminal liability generally does not turn solely on the results of an act without considering the defendant’s mental state,” Chief Justice John Roberts wrote for the seven-to-two majority in Elonis v. United States. The dissenters were two of the court’s originalists, Justices Clarence Thomas and Samuel Alito.