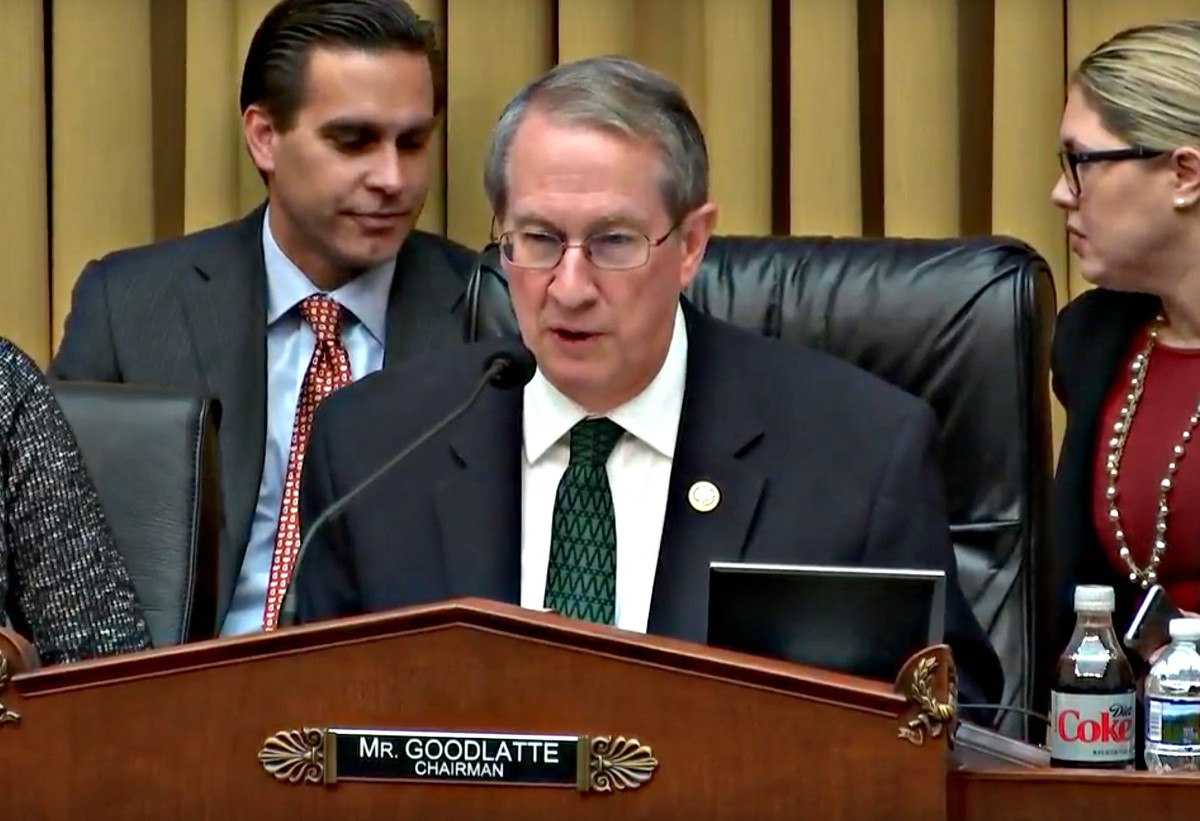 Rep. Bob Goodlatte, the Republican chairman of the U.S. House Judiciary Committee, took aim Tuesday at the world’s oldest profession, adding yet another legislative proposal to address a problem that is largely overhyped: online sex trafficking.

Goodlatte’s remarks came during a markup session for H.R. 1865, the Allow States and Victims to Fight Online Sex Trafficking Act of 2017 (FOSTA), sponsored by Rep. Ann Wagner, a Missouri Republican.

As its title suggests, the bill originally targeted sex trafficking, which federal statute defines as involving minors in the sex trade or adults brought into prostitution through force, fraud, or coercion.

But as a means to an end, Goodlatte offered an amendment, which the committee adopted, replacing Wagner’s proposal with one that would go after websites that promote prostitution.

The thirteen-term Virginia representative’s line of reasoning: Online prostitution of any sort leads to online sex trafficking, so why not attack the root cause?

“Despite great efforts by law enforcement, young children and women are being advertised online brazenly for sex trafficking,” Goodlatte said.

“Furthermore, despite the fact prostitution is nearly universally illegal in the United States, online prostitution markets operate with virtual impunity,” he added. “These markets provide an unregulated venue where sex trafficking flourishes.”

Goodlatte’s FOSTA 2.0 amends the Mann Act, which Congress passed in 1910 during a national panic over a mythical scourge of “white slavery.”

The Mann Act makes it illegal to transport any person over state lines for purposes of prostitution. Goodlatte’s bill makes it illegal for anyone who uses or operates, or even attempts to use or operate, “a means of interstate or foreign commerce” — for instance, a website — “with the intent to promote or facilitate the prostitution of another person.”

If the proposal were to become law, a judge could sentence a guilty party to up to ten years in prison for this offense. That same judge could tack on an additional fifteen years for aggravating factors, such as promoting or facilitating the prostitution of five or more persons, or if the perpetrator acted “in reckless disregard of the fact such conduct contributed to sex trafficking.”

As amended, FOSTA would provide for mandatory restitution and allow victims to sue, either under FOSTA or a comparable state law. And it would open the door for local prosecutors to go after websites for violating state criminal laws that dovetail with FOSTA or the federal sex-trafficking statute.

The bill carves out an exception for jurisdictions where brothels legally operate.

Goodlatte’s newly marked-up FOSTA states that Congress never intended for Section 230 of the Communications Decency Act of 1996 to protect websites that “unlawfully promote and facilitate prostitution and contribute to sex trafficking.”

Section 230, sometimes called the “fairy godmother of the internet,” immunizes interactive websites against liability for content posted by users. That creates a “safe harbor” for website administrators to remove offensive material without fear that such an act might be used in court as evidence of “knowledge” that a crime has been committed.

Addressing his fellow committee members, Goodlatte made clear that his bill was written with one particular beneficiary of Section 230 in mind: the online listings giant Backpage.com.

Federal and state courts generally have interpreted Section 230’s protections as applying to Backpage as well. Lawmakers such as Goodlatte and some anti-trafficking activists such as Cindy McCain allege that the company intentionally facilitates illegal activity.

Which in turn means Backpage rightly falls under the First Amendment umbrella that shields those companies from liability.

Goodlatte was having none of that.

“Backpage will be held accountable,” he harrumphed at one point.

Following Goodlatte’s comments, the ranking Democrat on the judiciary committee, Rep. Jerrold Nadler of New York’s 10th District, criticized the bill and said he could not support it in its current form.

Nadler asked Goodlatte to hold the legislation until the bill could be fully vetted through the legislative process.

Unlike many legislators who have opined on this or similar legislation, Nadler made more than passing reference to freedom of speech, noting that Congress must act with care when distinguishing between innocent intermediaries and those who are involved in criminal activity.

“Out of an appropriate respect for the First Amendment, and based on the desire to safeguard the operation of the internet, Congress has been cautious when attempting to set rules distinguishing the two,” Nadler said.

Then again, Nadler proceeded to praise the Senate’s online-trafficking bill, the Stop Enabling Sex Traffickers Act of 2017 (SESTA), which many tech writers have panned for carving a cave-sized hole in Section 230 and creating a broader standard of scienter for the federal sex trafficking statute.

Scienter is a legal term that refers to the level of knowledge of wrongdoing necessary for someone to be guilty of a crime. The most recent version of SESTA defines “participation in a venture” as “knowingly assisting, supporting or facilitating” a sex-trafficking violation.

Hypothetically, that could apply to the very editorial controls that Section 230’s safe-harbor provision encourages: If a website were to remove some offensive material, a prosecutor could use that act as evidence of knowledge of wrongdoing.

Nadler also entered into the record a letter that he said was from 31 trafficking victims and victims’-rights organizations, stating their objections to FOSTA 2.0 and their preference for SESTA.

Opponents of the new FOSTA generally seem to be in favor of SESTA, while those opposed to SESTA seem at least willing to entertain FOSTA 2.0 as better than the alternatives.

Though Goldman suggests several tweaks to address the new FOSTA’s shortcomings, he makes clear that in his view, no further legislation in this area is necessary.

Goldman praised the new bill’s standard of “intent,” which replaces “knowledge or recklessness towards third party content.” But he also warns of the new law’s shift toward online prostitution in general, rather than sex trafficking in specific.

Goldman also flags the “five or more persons” factor, noting that if a website operator were to cross the “intent” threshold, then finding five instances would be pretty easy. As a result, he argues, the “aggravated” violation would become “the baseline standard for website operators.”

Somewhat predictably, according to a report in Wired, two of SESTA’s main sponsors in the U.S. Senate, Senators Rob Portman and Richard Blumenthal, blasted FOSTA 2.0.

Democrat Blumenthal claimed the new bill’s priorities were “shamefully misplaced.” Portman, a Republican, said victims’ advocates are opposed to the bill “because they’re concerned it is actually worse for victims than current law.”

As for Rep. Wagner, she signed off on the new FOSTA in a press release praising its passage.

Interestingly, the powerful Internet Association issued a statement in Monday from president and CEO Michael Beckerman, saying the group “supports FOSTA, as amended.”

Perhaps Beckerman, whose organization represents the biggest names in Silicon Valley, would prefer to steer clear of feuding legislators. In early November, after publicly opposing the Senate bill, the Internet Association flipped and endorsed an amended version of SESTA.

But Sen. Ron Wyden of Oregon quickly placed a legislative “hold” on the bill, keeping it off the Senate floor indefinitely.

Wyden was one of the original authors of Section 230 in 1996, and he has spoken forcefully in its defense and against SESTA.

By contrast, in a statement released by his staff on the new FOSTA bill, Wyden signaled his approval of the legislation.

“This is a smarter, more effective approach to go after criminal sex traffickers and prevent these heinous crimes,” Wyden said.

“I’ve pushed to build on my record of giving law enforcement effective tools to put criminals behind bars — without undermining the foundations of the internet,” he added.