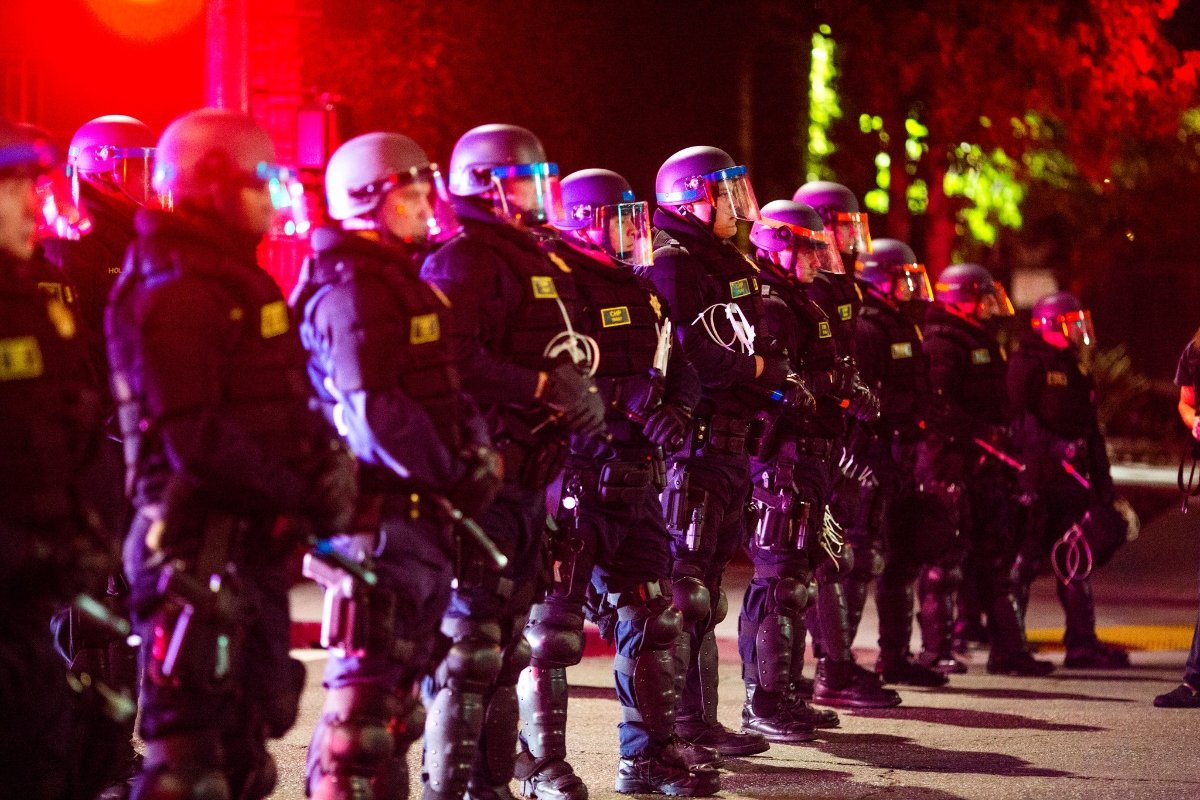 Bulls on parade: Mainstream Dems are seeking an expansion of police power in the wake of Jan. 6. (Thomas Hawk via Flickr)

Following the Jan. 6 Capitol Hill riot, Dems have called for new domestic terrorism laws and other civil liberties rollbacks, but some on "the left" are opposing an expansion of police powers.

It’s almost as if 2020 and the nationwide demonstrations against police violence never happened.

In the wake of the Jan. 6 MAGA riot at the Capitol, which led to the second impeachment of Donald Trump and an FBI dragnet for the participants that has nabbed more than 100 so far, mainstream Democrats and progressives have advocated for a rollback of civil liberties rivaled only by that which followed the tragedy of 9/11.

Democratic Congressmen have called for the FBI to add anyone suspected of entering the Capitol building on that day to the bureau’s secretive “no fly” list.  News outlets like The Washington Post have cheered the de-platforming of the social media app Parler (as well as Trump’s Twitter ban). And there have been further misguided calls for the repeal of Section 230 of the Communications Decency Act, the 1996 law that created the internet as we know it.

"Don’t dare call them protesters,” President-elect Joe Biden said of the mob that stormed the U.S. Capitol on Wednesday. “They were a riotous mob. Insurrectionists. Domestic terrorists." https://t.co/Xlbzqx6uxH

But perhaps the most chilling suggestion, one that has finally caused significant pushback from libertarians and leftists, is the idea of a new “domestic terrorism” bill, one that would give the FBI and the Department of Homeland Security a freer hand in combating home-grown “seditionists” and “insurrectionists.”

In remarks responding to the Capitol Hill riots, President-elect Joe Biden made clear that he regarded the mob that stormed the steps of Congress as more than just a lumpen mass of right-wing agitators and Kool-Aid drinkers.

In reporting on Biden’s response, The Wall Street Journal noted that Biden has made the passage of a new domestic terrorism law a priority for his first 100 days. Advisers have recommended that Biden “create a White House post overseeing the fight against ideologically inspired violent extremists and increasing funding to combat them.”

Joe Biden used to brag that he practically wrote the Patriot Act. Given his purported plan to pass a new domestic terrorism law once in office, the danger is real that the Capitol attack will be used as an excuse to severely curtail our civil liberties. https://t.co/jD7MENbo9T

Proponents of a new law argue that domestic terrorism is currently treated differently from international terrorism and that new statutes are needed for parity.

But civil libertarians, ideological libertarians and some lefties argue that there are more than enough laws on the books to deal with the Capitol Hill mob, and that a domestic terrorism law could be used against movements and groups such as Black Lives Matter and antifa, both of which were a focus of the Trump Justice Department.

One of the most critical articles written in opposition to a new domestic terrorism bill has come from Luke Savage of the publication Jacobin, which defines itself as “offering socialist perspectives on politics, economics, and culture.” In a piece titled, “We Should Be Very Worried About Joe Biden’s ‘Domestic Terrorism’ Bill,” Savage compares the drive for a domestic terrorism law to the push for the dreaded Patriot Act, post 9/11.

Passing the Senate with only a single dissenting vote, the Patriot Act dramatically expanded the power of federal authorities to spy on ordinary Americans with minimal oversight: enabling the FBI to obtain detailed information about citizens’ banking history and personal communications without having to seek judicial approval and even allowing “sneak and peek” searches of homes and offices. “The Patriot Act,” in the rather blunt words of a brief prepared by the ACLU, “[turned] regular citizens into suspects.”

Savage points out that Biden took credit for the bulk of the language in the Patriot Act and that he has a “dodgy” record when it comes to protecting civil liberties. And Savage warns of the dangers of a domestic terrorism law, which may be framed as targeting only white-supremacists and “figures associated with the likes of QAnon.”

Regardless of the way its spun for liberals with an appetite for revenge against the MAGA-ites, Savage states that there is “absolutely no reason to believe authorities wouldn’t use new powers to target groups that have nothing to do with Donald Trump or Trumpism.”

Police almost certainly infiltrated Black Lives Matter protests last summer, and American law enforcement has a long and ignominious history of targeting progressive groups — not to mention socialists, trade unions, and civil rights activists. As this history suggests, the premise behind any new anti-terrorism law will also be wrong on its face: the American state hardly faces excessive restrictions on its capacity to surveil, discipline, and punish. (The FBI, to take an obvious example, already possesses considerable power to investigate groups suspected of extremist activity.)

The Intercept, an anti-authoritarian outlet if there ever was one, also threw water on the idea of a domestic terrorism law, in a piece by Alex Emmons, discussing how easily such a law could backfire on progressives.

Emmons asserted that “terrorism laws can apply to right-wing violence,” but that “a 2019 review by The Intercept found that as a matter of practice, they rarely are.” He also quoted spokespersons for progressive orgs such as the Brennan Center and the Center for Constitutional Rights, who decried the proposal.

As the Vice Chair of the Oversight subcommittee who ran investigations into domestic terror laws, I respectfully disagree.

Our problems on Wednesday weren’t that there weren’t enough laws, resources, or intelligence. We had them, & they were not used.

It’s time to find out why. https://t.co/zGVLM2MZS7

Diala Shamas, a staff attorney with the latter organization, tells Emmons the following:

“Anyone familiar with the scope of surveillance and targeting of Black political dissent, or Muslim communities, knows that law enforcement has all the tools it needs to aggressively disrupt and hold accountable those who planned and participated in the storming of the Capitol. Why they didn’t raises serious questions, but it was not because their hands were tied. We don’t need new terrorism designations.”

Alex Pareene in The New Republic blasted the idea of a new terrorism statute as “absurd,” stating that it’s illogical to take “a situation in which a ‘normal’ police response” would have been “sufficient to stop a protest from escalating to a deadly riot” and  “using it to argue for things like making it even easier for the FBI to entrap people on bogus ‘terrorism’ charges.”

“The state does not lack teeth,” she pointedly observes. “The state has too many at its disposal already. The state lacks discretion, and all sense of proportion, and that is by design.”

We don’t need to bring counterinsurgency home, not least because it’s already been here. Nearly 50 years ago, James Baldwin described domestic policing as such. https://t.co/rh0PB4AQsD

On Twitter, the ACLU, nation’s oldest and largest defender of civil liberties, said Biden was “wrong” to demand new laws to deal with domestic terrorism, calling it a “predictably misguided response that will further harm Black and Brown communities.”

But can it be that AOC will be the one to put a stake in the heart of domestic terrorism legislation?

Responding to a Jan. 9 Tweet from Norman Ornstein, a resident pundit with the conservative American Enterprise Institute, uber-liberal Rep. Alexandria Ocasio-Cortez rejected Ornstein’s call for the House to immediately “pass a domestic terrorism statute, with a focus on white supremacist terrorism, and send it to the Senate.”

Indeed, in her Tweet at least, AOC seemed totally opposed to the concept.

“As the Vice Chair of the Oversight subcommittee who ran investigations into domestic terror laws, I respectfully disagree,” she writes. “Our problems on Wednesday weren’t that there weren’t enough laws, resources, or intelligence. We had them, & they were not used. It’s time to find out why.”

President-elect Biden is wrong to call for a new domestic terrorism law.

It is a predictably misguided response that will further harm Black and Brown communities. https://t.co/Io0hu5KPuv

AOC’s stance helped illustrate a recent Fox News item describing a “split” in Democratic ranks over a domestic terrorism law and the risk of “criminalizing dissent.”

The piece described the support of corporate Dems like Biden and Sen. Dick Durbin of Illinois, who in 2019 introduced a domestic terrorism law targeting white supremacists, which went nowhere.

“Before we go down this road again, we should think very carefully about whether new authorities are actually needed and how they might be abused.” https://t.co/DBEikBEeX6

A companion House bill was vigorously opposed by the ACLU, which warned that it “would further incorporate abusive terrorism authorities into a discriminatory criminal justice system.”

Nevertheless, Durbin has promised to reintroduce his bill in the coming session.

Will the violent deeds of Jan 9 pave the way for what might ultimately be reactionary, pro-law enforcement legislation? It remains to be seen.

Other retrograde steps have encountered some resistance, but not nearly as much, like adding more Americans to the no-fly list, and the widespread censorship of voices on the right, albeit by third parties such as Amazon, Apple, Twitter and Facebook.

Regarding censorship, for instance, progressives are quick to point out that the silencing of Parler and Trump are not First Amendment concerns.

Which is true. But free speech is a much broader concept, calling to mind that famous quote often misattributed to Voltaire, at which many so-called liberals now balk.

“I disapprove of what you say, but I will defend to the death your right to say it.”

And ICYMI, check out these stories from FPC:
UK Judge Blocks Julian Assange’s Extradition on Health Grounds, Denies Him Bail
and
Lacey/Larkin Rebut Prosecutors’ Arguments on Bid to Force Recusal of Judge Brnovich