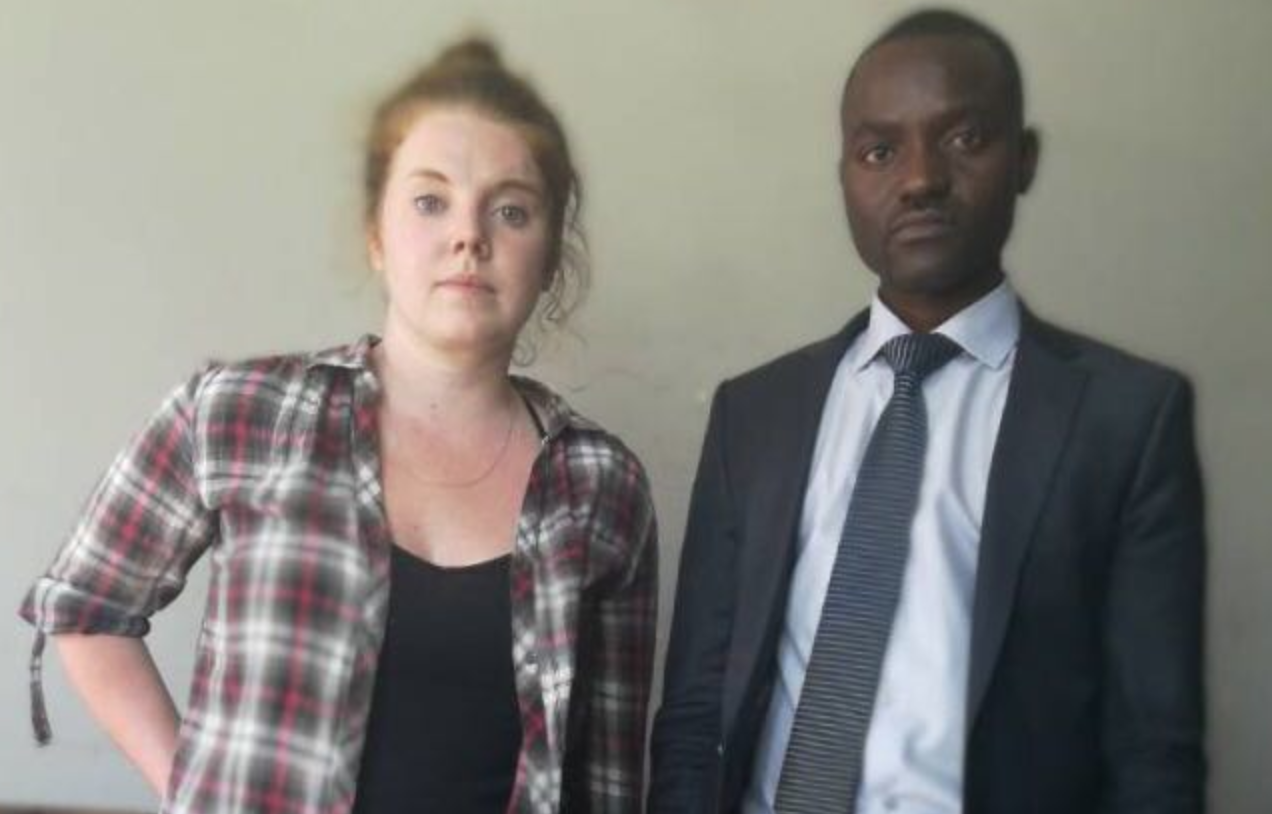 Martha O'Donovan, left, with her attorney Obey Shava at a hearing in early November (via @NMkapikoh on Twitter)

A Zimbabwe court freed activist and journalist Martha O'Donovan, 25, on bail as the U.S. citizen battles trumped-up charges of attempting to overthrow the government.

Following a week in a Zimbabwe prison infamous for its squalor, a 25-year-old American activist jailed for Twitter-bashing doddering dictator Robert Mugabe, is free on bail.

During a November 9 hearing in the Zimbabwe capital of Harare, High Court Judge Clement Phiri granted New Jersey native Margaret O’Donovan’s request for bail, setting it at $1,000. O’Donovan was not present in court for the decision, but CNN reported her release late this morning.

Authorities collared O’Donovan on November 3 for allegedly insulting Zimbabwe President Robert Mugabe. The alleged weapon: a tweet calling the 93-year-old East African strongman a “selfish and sick man” and implying via crudely marked-up images that he wears a catheter.

As ridiculous as it may sound, dissing Mugabe, who has been in power since 1980, is punishable by a year in prison.

Zimbabwe prosecutors upped the ante once they had O’Donovan in custody, alleging that the New York University grad plotted to overthrow the government via her involvement with the progressive Magamba Network, which agitates for democracy and reform through such nontraditional means as MagambaTV, a low-rent Zimbabwean version of The Daily Show.

Attempting to overthrow a regime that has been in power for nearly four decades could net a person two decades in a Zimbabwe prison.

In O’Donovan’s case, that would be twenty years for giving Mugabe a raspberry on Twitter and helping some local wags make fun of him.

As the New York Times reported, Judge Phiri didn’t think highly of the prosecution’s case. In front of a packed courtroom on Thursday, the jurist expressed skepticism about the allegations, observing that O’Donovan “has a plausible defense” and finding no evidence that she was plotting to overthrow the government.

Though @matigary sports a profile pic of a handsome black gent in suit and tie, prosecutors claim O’Donovan owns the account. But @matigary continued to tweet after police arrested O’Donovan and confiscated her cell phone. And the account sometimes tweets in Shona, the most widely spoken language native to Zimbabwe.

O’Donovan supporter Samm Monro, a.k.a. “Comrade Fatso,” an entertainer and the owner of the Magamba Network, where O’Donovan works as a producer, said her arrest was an intimidation tactic aimed at dissidents in advance of Zimbabwe’s 2018 elections, in which Mugabe stands to win yet another five-year term as president.

Comrade Fatso speaks the truth. Mugabe’s regime has been the target of riotous street protests in the past.

In an article about O’Donovan’s impending release, Aljazeera.com noted that her arrest “marks the first internet abuse case since the creation of a cybersecurity ministry in a cabinet reshuffle last month.”

CNN reports that when the regime unveiled this new ministry, a Mugabe spokesman promised it would “trap all rats” misusing social media.

In another piece on the O’Donovan case, Reuters noted, “The government has been particularly uneasy about social media after activists such as Pastor Evan Mawarire and his #ThisFlag movement last year used social media to organize a stay-at-home demonstration, the biggest anti-government protest in a decade.”

The cybersecurity ministry may be a new wrinkle, but Mugabe’s crackdown on social media is not. A June 2016 piece from the international broadcaster Deutsche Welle reported that Zimbabwe’s government had hiked data prices 500 percent and ordered mobile-phone carriers to suspend data promotions, thus preventing most Zimbabweans from accessing the internet.

Deutsche Welle also reported that the Mugabe government perceives social media as a direct threat to its existence.

But who would’ve thought that a part-time Harare bartender and liberal-arts major from Bridgewater, New Jersey, would come to personify that threat in the twisted minds of Mugabe and his thuggish underlings?

In this instance, the regime’s strategy appears to have backfired.

The hashtag #FreeMartha went viral after her arrest, igniting an international backlash to the Mugabe government, with Amnesty International calling for prosecutors to drop their “absurd” charges and the U.S. embassy in Harare informing news outlets that it is working behind the scenes on her behalf.

With the judge’s decision to grant bail, a new hashtag is emerging: #MarthaIsFree.

But for the time being, at least, O’Donovan’s freedom is circumscribed. The court required her to relinquish her passport as a condition of her release. And she must report twice a week in person to the Criminal Investigations Department of the Zimbabwe Republic Police.

The next hearing in her case is November 15.