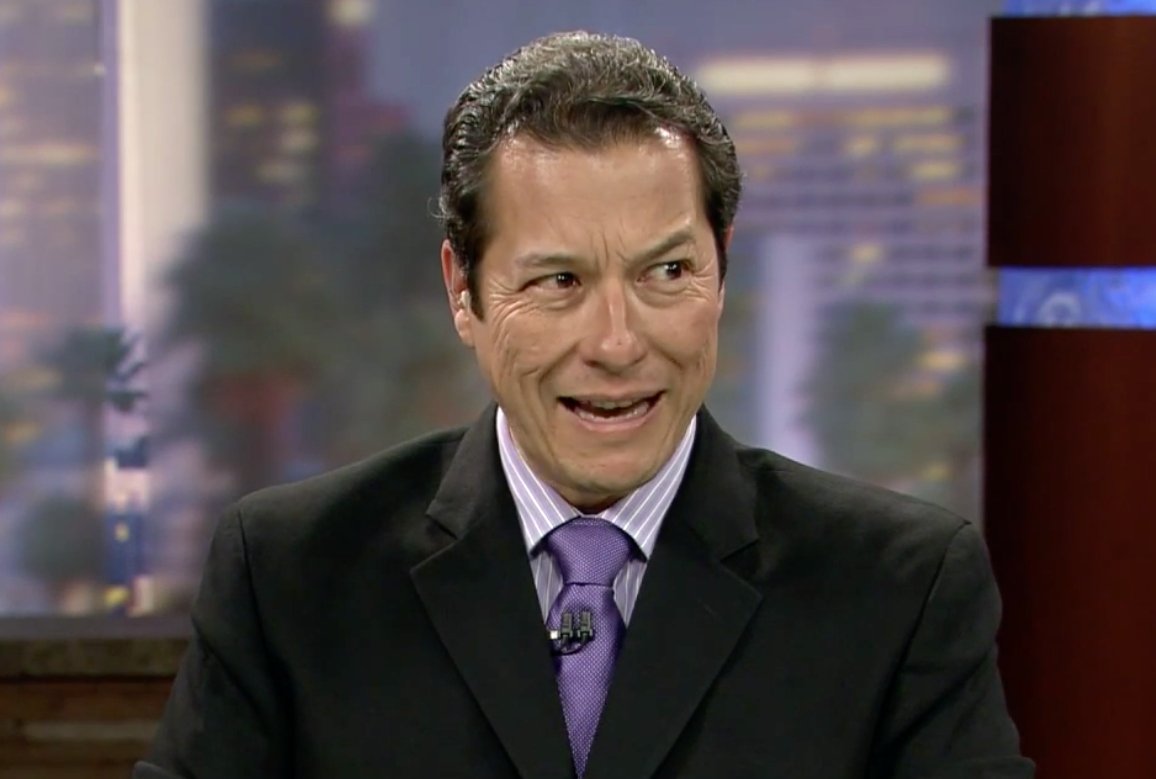 Arizona Republic reporter Richard Ruelas goes all in for the prosecution's bogus theory of the Lacey/Larkin case.(AZPBS via YouTube)

In a slanderous piece for the Arizona Republic, Richard Ruelas regurgitates prosecution talking points, misreads the indictment and falsely accuses Lacey and Larkin of murder.

In hindsight, I should not be surprised by “reporter” Richard Ruelas’ shameful steaming pile of a hit piece in the Arizona Republic yesterday.

After all, the first thing the Republic lifer did when veteran newspapermen Michael Lacey and Jim Larkin were arrested by the FBI on April 6, 2018 was run to Cindy Lou Hensley McCain for a video chat, in which Ruelas unquestioningly swallowed everything the gloating Consort of Cornville said about the arrests, with zero rebuttal. He didn’t even bother to ask if the McCains might have an ax to grind with Lacey and Larkin, something Front Page Confidential has documented at length.

But Ruelas’ reporting in his preview of the Lacey/Larkin trial is so blatantly inaccurate, so willfully ignorant and so grotesquely biased that he might as well have let lead prosecutor Kevin Rapp write it for him. At least Rapp would not have made some of Ruelas’ rookie mistakes, like misreading the indictment and putting a quote ascribed to Larkin into Lacey’s mouth, which I’ll get to shortly.

I mean, Ruelas actually “teaches” at ASU’s Cronkite School of Journalism. Which is scary. And a great argument for why J-schools should be abolished.

(Perhaps I’m being too harsh on the profession, both the Associated Press and Channel3/Channel 5 did fair pieces on the upcoming trial. So the issue is more specific to Ruelas.)

Does Ruelas teach aspiring journalists how to accuse a person of murder who is innocent of that charge?

Because that’s what he did with Lacey and Larkin, the founders and former owners of the Phoenix New Times and Village Voice Media, by doing the prosecutors’ filthy business for them, alleging that, as the onetime owners of the classified listings site, Backpage.com, they are somehow vicariously responsible for homicides that they did not commit and had nada to do with.

It’s worth noting that Lacey, Larkin and their four co-defendants are not charged with murder or other heinous crimes, like sex trafficking or child sex trafficking. Rather, they are charged with 100 counts related to facilitating misdemeanor state prostitution offenses in violation of the U.S. Travel Act, as well as attendant money laundering and conspiracy charges.

How did Ruelas get from facilitating prostitution, which a majority of adults want decriminalized, to murder?

Wrong-way Ruelas achieves this Super Dave Osborne-like leap of logic by leading his screed with the details of the murder of a young woman who was working for an escort agency when she was stabbed to death by a psychopath in 2012. Her name was Crystal MacMartin.

An escort agency sent her to a Scottsdale apartment occupied by the killer, who took a butcher knife to her. Ruelas tells us the murderer pleaded guilty and is doing life, but he overlooks the man’s name.

And no, it wasn’t Lacey or Larkin. It was James Michael Matthews, according to court documents.

Ruelas might’ve gotten the story straight if his tongue hadn’t been surgically connected to the prosecutor’s ass.

Police found MacMartin, Ruelas says, “Covered in blood, nearly two dozen stab wounds to her back, abdomen and chest, including a fatal one that punctured her heart.”

“MacMartin would be listed as Victim 6 in a lengthy indictment handed down in 2018 against the founders of the Backpage website. Her death was used to build the case that executives and employees of the since-shuttered website knew they were facilitating prostitution and continually turned a blind eye to the consequences.”

Ruelas’ judgemental tone continues throughout. He mentions a police detective’s conversation with a dispatcher who sent the young woman to Matthews’ apartment. The escort agency allegedly placed an ad on Backpage for an anonymous “Nadia,” but Ruelas doesn’t hold the agency to the same standard as Backpage.

Ruelas laments that federal Judge Susan Brnovich has ordered that details of such third-party “murders” cannot come into the trial, because they would be prejudicial.

But no one is charged with murder in this trial, and even the government’s attempt to link murders to legal escort ads is more akin to a Rube Goldberg contraption than anything.

Judge Brnovich previously wrote in an order that, “If evidence of the details of the murders were introduced, it is likely to inflame the passions of the jurors against the defendants or create confusion that defendants are responsible for the murders.”

On Tuesday, in the wake of Ruelas’ slimy excuse for journalism, defense attorney Joy Bertrand, who represents one of Lacey and Larkin’s co-defendants, filed a motion asking Brnovich to enforce her previous order against the prosecution, preventing the government from introducing irrelevant, prejudicial evidence.

Bertrand makes the following points, which Ruelas might have included in his piece, if his tongue was not surgically connected (metaphorically speaking) to the prosecution’s ass and he’d made a few phone calls.

1. Escort Services are legal in Scottsdale. The city even licenses them.

2. Ms. MacMartin filled out an employment application to work at the escort service. In that application, she noted she had worked as an escort in Las Vegas, before moving to Arizona.

3. The Government can point to no evidence that shows she was forced into working as an escort or “trafficked.”

5. The escort service did not use Ms. MacMartin in an ad. Rather, the service used generic ads that described different kinds of women (e.g., slender brunette, busty blonde).

6. The Government offers no evidence to show that Ms. MacMartin intended to do anything other than provide escort services to Matthews.

The police report discusses the tearful testimony of MacMartin’s boyfriend, who told the police that his girlfriend was not a prostitute. Is the boyfriend responsible for MacMartin’s death? Um, hell no. Unlike Ruelas, I don’t shift the moral blame for crimes to innocents.

Ruelas also pooh-poohs the First Amendment right to publish as “vital, if mundane.”

Huh? The same right that the Republic enjoys? As Lacey’s attorney Paul Cambria has explained, the publication of third-party speech, uploaded by users to an interactive site like Backpage, is presumptively protected by the First Amendment.

There’s nothing ‘mundane’ about the First Amendment. It is the pillar of American democracy. If Ruelas doesn’t like it, perhaps North Korea would be more to his liking.

That principle protects the Republic, as well as the wide range of classified ads that were uploaded to Backpage — including massage, dating and escort ads.

Only speech that is illegal on its face is not protected by the U.S. Constitution. And it is the government’s responsibility to prove that speech is unprotected. The content of adult-oriented ads is often ambiguous, and federal courts have repeatedly ruled such language to be 100-percent legal.

There’s nothing “mundane” about the First Amendment. It is the pillar of American democracy. If Ruelas doesn’t like it, perhaps North Korea would be more to his liking.

There are so many screw-ups in Ruelas’ piece that it would take too much time to address them all. But one of the dumbest occurs when Ruelas misreads the indictment and ascribes a quote to Lacey that should be attributed to Larkin.

It’s where Larkin allegedly states, in an email, that adult-oriented advertising is in the company’s “DNA.”

Rueles corrected it after I pointed it out on Twitter numerous times.

Like they taught us in grade school, friends: Reading Is Fundamental.

BTW, there’s nothing incriminating in that DNA comment. Adult ads were common for decades in alternative weeklies, the Yellow Pages and even the sports page of some dailies.

You know, because they were legal. And should remain so, if you ask me.