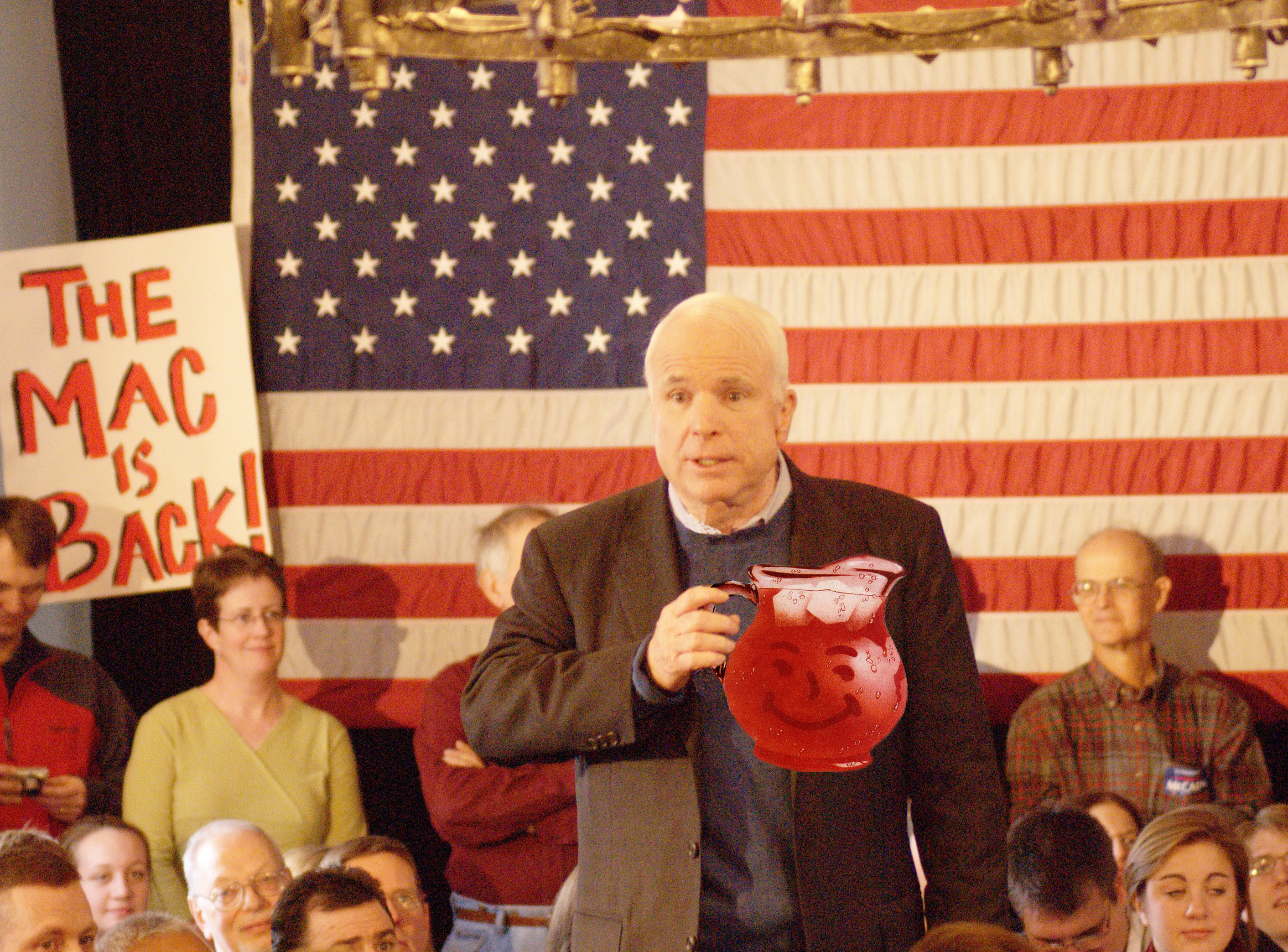 Even as he inches toward his final exit, master manipulator John McCain has the mainstream media guzzling his PR Kool-Aid

Has anyone in modern U.S. history hyped their own demise like John McCain? The senior senator from Arizona has not been in Washington, D.C., since returning home to his Sedona ranch in December to fight a deadly form of brain cancer, but he hasn’t missed a beat when it comes to self-promotion.

Copies of his third and likely last memoir, The Restless Wave, were recently released to friendly reporters, who have dutifully described it as the dying words of a political maverick. Cowritten with his longtime collaborator and former aid Mark Salter, the book officially drops May 22 — six days before an HBO documentary, titled John McCain: For Whom the Bell Tolls, will air.

McCain reportedly granted “unprecedented access” to HBO filmmakers. It’s a tool he has used to great advantage in the past to score positive press. The most prominent example:  McCain’s Straight Talk Express, the name he bestowed upon his campaign bus in 2000 as he stumped unsuccessfully for the Republican presidential nomination while holding court and schmoozing journalists along the way.

New York Times reporter Jonathan Martin recently obtained some unprecedented access for a May 5 story, when he interviewed former vice president Joe Biden, ex-Connecticut senator Joe Lieberman, and other visitors to the McCain ranch. Each person had gone to pay respects to the six-term senator, who has earned increased cachet lately among Democrats, Independents, and disaffected Republicans for his withering criticisms of Donald Trump.

Martin quotes from the senator’s upcoming book, wherein the Navy vet and former POW chides the president for being more enamored with “the appearance of toughness or a reality show facsimile of toughness” than actual American values. Martin also reveals that McCain’s “intimates” have informed the White House that Trump will be persona non grata at McCain’s funeral, which is slated to take place at Washington National Cathedral. (Vice President Mike Pence is apparently welcome.)

But given the long-running feud between the president and McCain, why would Trump want to endure a service marking his enemy’s passing? No doubt The Donald would rather be hitting the links at Mar-a-Lago.

And can you blame him?

Other outlets have since reported that former presidents George W. Bush and Barack Obama will deliver eulogies at McCain’s funeral. This news has been greeted with hurrahs from everyone who despises Donald Trump, playing into the meme of McCain as a man of true, old-school bipartisanship and statesmanlike conduct.

The punditocracy never asks why McCain is making a public spectacle of his far-too-long goodbye, never wonders about the propriety of leaking the micromanaged details of his impending funeral for maximum effect.

But as I recounted at length in my recently published ebook, The Stains of John McCain, the meme of McCain as Mr. Consensus and Mr. Country-Before-Party is belied by a 35-year career of cynical maneuvering and partisan politics.

This is a man who reportedly once said, “I’m duty bound to embarrass a Democrat whenever I can,” and who once took aim at Bill Clinton’s then-teenage daughter during a GOP fundraiser with the following joke:

Do you know why Chelsea Clinton is so ugly? Because Janet Reno is her father.

Can you imagine the outcry that would occur if President Trump were to crack wise about 33-year-old Meghan McCain’s weight? Just saying.

With time running out, the senator is appealing to his longtime fan base in the liberal mainstream media, marketing himself for posterity to an audience that holds him in the highest regard despite the reality of his politics.

The punditocracy never questions his intentions, never asks why McCain is making such a public spectacle of his far-too-long goodbye, never wonders about the propriety of his camp leaking the micromanaged details of his impending funeral for maximum effect.

Which brings us to Sarah Palin, McCain’s 2008 choice for vice president. Her selection, we are now informed by those with advance copies of Restless Wave, is one of McCain’s “regrets” in life. He wishes he’d chosen Connecticut Senator and Democrat-turned-Independent Joe Lieberman to be his running mate in 2008.

According to Jonathan Martin’s story in the Times, McCain blames his campaign aides for giving him bad advice. They told him Lieberman would be a disastrous pick because the pro-choice former Democrat would incur the enmity of the GOP base.

“It was sound advice that I could reason for myself,” McCain reportedly writes in his memoir. “But my gut told me to ignore it, and I wish I had.”

But in 2012, when Politico asked McCain why he chose Palin over other contenders such as that year’s presumptive Republican presidential nominee, Mitt Romney, or Minnesota Gov. Tim Pawlenty (or even Lieberman), this was McCain’s response:

As for McCain’s gut, it was telling him a different story in 2008, according to the book Game Change: Obama and the Clintons, McCain and Palin, and the Race of a Lifetime , written by veteran political reporters John Heilemann and Mark Halperin.

See Also:
The Stains of John McCain: Remember John McCain as a Warmonger and Cunning Opportunist and Leave the Hero Worship to His Lackeys

Heilemann and Halperin portray Lieberman as the McCain camp’s early favorite for VP. But when news that Lieberman was being considered for the role was inadvertently revealed, the GOP’s right flank screamed bloody murder. Even McCain had to admit Lieberman was a nonstarter. He could go with one of the more conventional candidates for the job, or, some of his aides suggested, he could surprise everyone and pick a little-known, one-term governor of Alaska, Sarah Palin.

The authors of Game Change explain at length that Palin, who would prove to be out of her depth during much of the campaign, had not been given a thorough vetting, and McCain knew little about her. One of his longtime aides cautioned against Palin, noting that McCain’s reputation was at stake and that the right-wing governor, just halfway through her term, had almost no experience on the national stage.

The attorney in charge of the vetting process informed McCain that he was “impressed with how Palin handled herself,” but that compared to the other contenders, “there were more potential land mines with Palin.”

McCain asked for the attorney’s final word on Palin and was told that she was “high risk, high reward.”

Replied McCain: “You shouldn’t have told me that. I’ve been a risk taker all of my life.”

The risk was not only McCain’s to take, since Palin, whose grasp of foreign policy became the subject of prolonged mockery, would be one heartbeat away from the Oval Office and the nuclear codes.

In the end, Palin proved to be a drag on the ticket. But commentators have since observed that Palin’s acerbic and unconventional candidacy presaged Trump’s successful dark-horse bid for the White House.

So McCain’s attempt to rewrite history and make it seem as if his “gut” told him to go with Lieberman is understandable, even if it is as wrong as a fur coat in July.

What’s less understandable is why the press largely seems willing to let the senator slide on this and his many other blunders as a self-serving egotist and middling-at-best politician.