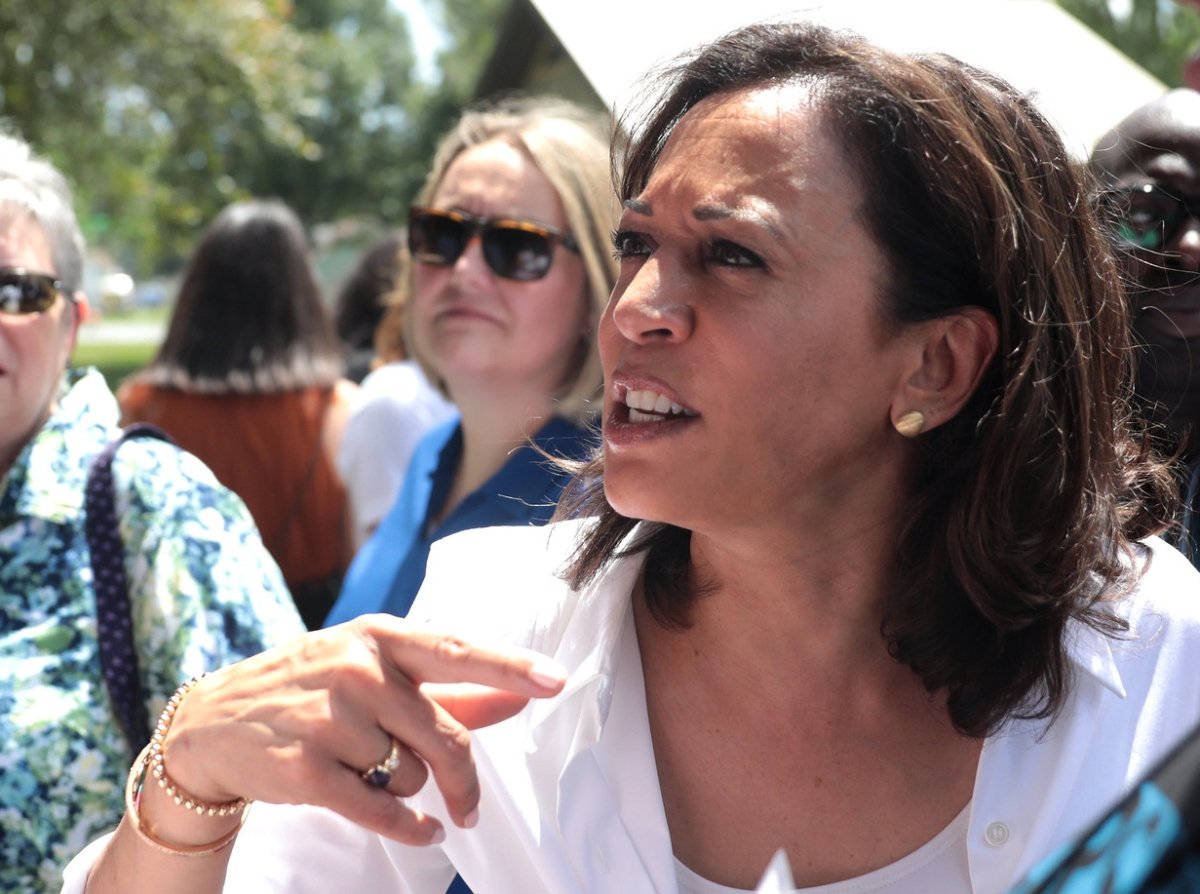 Wrong way Kamala, ready to blame anyone but herself for her disastrous campaign. (Gage Skidmore via Flickr; cropped from original)

Kamala Harris was a terrible candidate, a massive hypocrite and as phony as a Times Square Rolex; now she wants to shirk responsibility for her failed presidential bid.

California Senator Kamala Harris, one of the most inauthentic, Janus-faced Democratic politicians of recent memory, exited the presidential race on Tuesday, pointing the finger at others and failing to grasp the most important rule of leadership, or lack thereof: the fish rots from the head down.

The onetime media darling had tried to sell herself to the public as the female Obama, presumptuously announcing her candidacy for the Democratic nomination on MLK Day. But according to Harris’ throwing-in-the-towel speech, her efforts floundered because she lacked the personal wealth of some of her competitors.

“I’m not a billionaire,” she said in a video message to her followers. “I can’t fund my own campaign. And as the campaign has gone on, it’s become harder and harder to raise the money we need to compete.”

Excuses, excuses. Most of the other Democratic candidate are not billionaires. Certainly the three top contenders are not: Biden, Warren and Sanders. Ironically, a recent analysis by Forbes found that Harris could claim more billionaire donors than any of her rivals.

On the eve of her giving up, it had been announced that a SuperPAC would be helping her in Iowa with an ad buy.  And Harris reportedly raised $11.4 million in the third quarter of this year. Others in the race took in far less for the same period, such as Julian Castro, who garnered a mere $3.5 million.

But Harris is not personally a billionaire like Tom Styer or Michael Bloomberg? Well, boo-hoo-hoo.

She also squandered the home-state advantage in California, and once led the pack there, only to slide to fourth place, just barely ahead South Bend, Indiana Mayor Pete Buttigieg

Not being Mommy Warbucks doesn’t explain why Kamala’s campaign was so miserably run. In a letter written by a top campaign aide who bailed on Harris, the defector wrote, “This is my third presidential campaign and I have never seen an organization treat its staff so poorly.”

So if her massive belly-flop of a presidential bid cannot be attributed to all this poor-mouthing, what then?

Must be ’cause ‘Murica ain’t ready for her.

In an October interview with Axios on HBO, she foreshadowed this lame reasoning for her cowardly withdrawal, which is now being used by many of her followers and some liberal pundits. That’s right, the very thing that supposedly made her special, that made her the female Obama, was “the elephant in the room” about her campaign.

“You know, essentially, is America ready for a woman and a woman of color to be president of the United States?” she wondered.

Remember, this is about voters in the Democratic primary, who according to some, are too racist to elect her.

“There is a lack of ability or a difficulty in imagining that someone who we have never seen can do a job that has been done 45 times by someone that is not that person,” she added.

Left unsaid was the inconvenient fact that many African-American voters didn’t care much for her either.

Writing in the Washington Post, columnist Eugene Scott noted that in the end, the biracial Harris was “unable to rally significant support from the voting blocs her campaign and many political watchers thought would play a major role in sending her to the Oval Office: black voters and women.”

Indeed, that old white dude named Biden is seen as a safer and far more palatable bet for many who twice helped elect Obama, including people of color.

Scott wisely observed that Harris’ “history as prosecutor” and particularly, “her role in advocating for tough sentences for people of color,” drew skepticism from those on the receiving end of Harris’ checkered career as California’s Attorney General and DA of San Francisco.

Early on, law professor Lara Bazelon slammed Harris’ record in the New York Times and Harris’ disingenuous attempt to frame herself as a “progressive prosecutor.” Harris had cracked down on the disproportionately poor parents of truant children, and she once laughed at the idea of legalizing marijuana for recreational purposes.

Harris “refused to support statewide standards regulating the use of body-worn cameras by police officers,” Bazelon reminded us. And Harris defended the death penalty in court, while claiming to be personally opposed to it. In wrongful conviction cases, she took the prosecution’s side again and again.

The more people learned about Harris’ past, the more it was apparent that she was no champion of the oppressed or torch-bearer for criminal justice reform. As AG, her office fought the early release of prisoners because they were a source of cheap labor for the state, and she dragged her feet on investigating the Orange County district attorney’s office over widespread misconduct there.

Her hypocrisy new no limits. As a Senator, she backed FOSTA/SESTA, a law that banned online advertising by sex workers, resulting in death and hardship for those in the sex industry. But as a candidate she claimed to support the decriminalization of sex work, when in fact she endorsed a regressive “Nordic model” of targeting sex workers’ livelihoods.

Despite her past hard-line on pot legalization, she bragged in one interview about having smoked weed while in college, later proposing Johnny-come-lately legislation to decriminalize marijuana on the federal level.

Nor was she a friend of the First Amendment, jailing veteran newspapermen Michael Lacey and Jim Larkin in 2016 on ginned up “pimping charges” based on their former ownership of the now-defunct listings giant Backpage.com — charges twice rejected by California courts. (Full disclosure: Lacey and Larkin founded Front Page Confidential in 2017 to report on and defend free speech, as well as tell the truth about their ongoing First Amendment battles.)

In essence, Kamala was fake, from start to finish, and she telegraphed inauthenticity and duplicity with every cheap promotional stunt. She was and is an ardent defender of the status quo, and voters, particularly black voters, saw through her chameleon routine.

No doubt she withdrew from the race to preserve what political capital she has left. People have mentioned her as a possible veep pick or as a potential nominee for U.S. Attorney General in a Democratic administration.

Which would not be the talk if she went on to be clobbered in the primaries, capisce? Her capitulation, it seems, was as calculated and cynical as her run for the nation’s highest office.

For a refresher on some of Harris’ ill-deeds, read on:
Kamala Harris Claims She ‘Regrets’ Family Separations Under the Truancy Law She Pimped
‘Snitch Scandal’ Probe Initiated by Kamala Harris Ends, Critics Label It a ‘Sham’
Kamala Harris Cut Accused Sexual Harasser a Sweet Plea Deal as AG