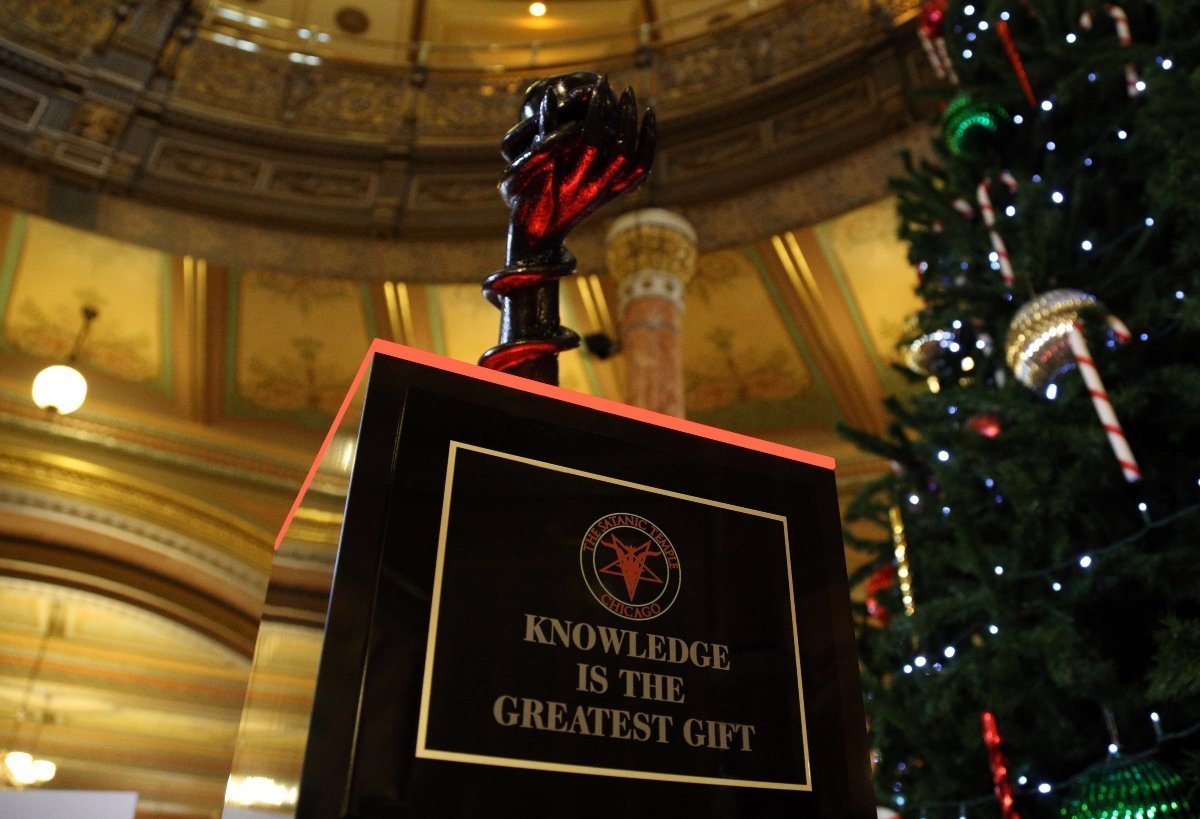 “Snaketivity,” part of a Christmas display at the Illinois State Capitol Rotunda in Springfield, Illinois (Courtesy of the Satanic Temple Chicago)

The cheeky rebels at the Satanic Temple are on a First Amendment winning streak this holiday season, having scored victories in Illinois, Arkansas, and New York, to name just three.

Founded in 2012 and based in Salem, Massachusetts, the Satanic Temple isn’t a devil-worshiping outfit by any stretch of the imagination. It’s a non-religious activist group that advocates for social justice and the separation of church and state.

Its pursuit of that latter mission frequently finds the group occupying the front lines on behalf of the First Amendment.

Many Satanic Temple causes begin with government entities that appear to violate the Establishment Clause, which forbids agencies from advancing or promoting one religion or belief over another.

So it was that the Satanic Temple’s Chicago chapter recently embarked on a field trip to Springfield, where members installed a “Snaketivity” statue alongside the more pedestrian menorah and nativity scene on display in the state capitol rotunda.

The sculpture, four and a half feet high and coal-black, depicts a female forearm with an apple perched on the hand and a serpent encircling the wrist. The base is inscribed with the Satanic Temple’s logo and the words, “Knowledge is the greatest gift.”

Calls for the statue’s removal followed its installation. One Catholic group prayed a rosary on the capitol steps and asked the Illinois Secretary of State’s Office, which has jurisdiction over the rotunda, to take down the sculpture. When Secretary of State Jesse White demurred on constitutional grounds, several state representatives sponsored a resolution condemning the statue. One lawmaker called the display “a disrespectful charade.” Declared another: “Satan and his worshipers are not welcome in the Illinois capitol.”

NEW: A federal judge is allowing the Satanic Temple to join a lawsuit challenging the Ten Commandments monument at the Arkansas Capitol https://t.co/LWx68KxUmu | #arnews pic.twitter.com/OFPZdOecDI

But Dave Drucker, a spokesman for the Illinois Secretary of State, told local news outlets that the statue was a First Amendment issue, and the state cannot treat the Satanic Temple differently based on its adherents’ beliefs.

“We accepted their permit, they filled out the form,” Drucker told local NBC affiliate WMAQ-TV (Channel 5). “If you do something for one group to be consistent, don’t you have to do it for everybody?”

According to Springfield’s State-Journal Register, the secretary of state has for many years allowed a sign marking the winter solstice that includes the assertion, “Religion is but myth and superstition that hardens hearts and enslaves minds.” The installation is the work of the Freedom From Religion Foundation, a Wisconsin-based nonprofit group.

And in 2008, the state permitted a Springfield resident to install an aluminum Festivus pole in the rotunda — Festivus being the secular winter holiday popularized by a 1997 Seinfeld episode.

The Snaketivity sculpture has been a huge PR boon for the Satanic Temple, spawning an ungodly number of news items and inspiring a sketch on Jimmy Kimmel Live, in which Billy Crystal plays the Supreme Being and Foo Fighters rocker Dave Grohl portrays Beelzebub.

But this is far from the group’s first skirmish with the too-forwardly faithful.

Since its founding, the Satanic Temple has pursued similar actions in various states — from attempting to offer a Satanic prayer at city council sessions in Arizona to helping to establish “After-School Satan” programs in public schools to counter the activities offered by an evangelical Christian organization.

The Satanic Temple’s most outrageous stunt to date may well have been the gay-themed “Pink Mass” it celebrated in a Mississippi cemetery in 2013. The ceremony reportedly involved same-sex couples making out atop the grave of the mother of Fred Phelps, founder of the homophobic Westboro Baptist Church, an organization that gained notoriety by demonstrating at the funerals of fallen U.S. soldiers.

But the group is probably best known for its nine-foot-tall bronze statue of the occult deity Baphomet, which depicts a half-man/half-goat figure seated on a throne beneath an inverted pentagram. Two children, a boy and a girl, stand on either side of the creature, staring up at it reverently.

At present, the Satanic Temple is fighting to place the statue on the grounds of the  Arkansas state capitol in Little Rock, alongside a Ten Commandments monument permanently installed there.

A federal judge recently permitted the group to intervene in a lawsuit opposing the Ten Commandments statue that was brought by the ACLU and the Freedom from Religion Foundation. In August, Baphomet enjoyed a brief public viewing during a rally at the capitol.

And in November, the Satanic Temple defended its copyright on the Baphomet statue by suing Warner Bros. and Netflix, which had used a version of the statue in its series, The Chilling Adventures of Sabrina. TST asked for at least $50 million in the suit, which was filed in early November in U.S. District Court in Manhattan.

According to news reports, the suit has been “amicably settled.”