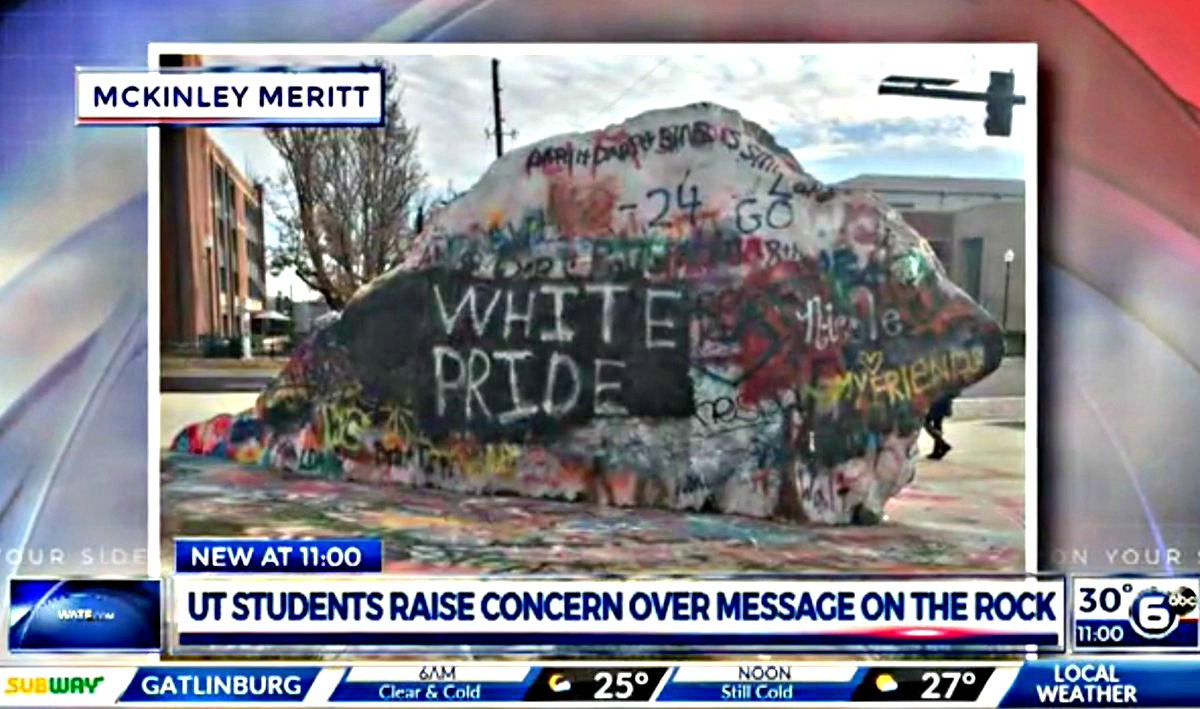 "The Rock" on the campus of the University of Tennessee, Knoxville, as it appeared on December 14 (screenshot via WATE-TV/ABC 6)

Racists had the constitutional right to defile a unique campus message board at the University of Tennessee, Knoxville -- and students had the same right to paint over it.

The First Amendment protects the vilest forms of speech, whether it comes in the form of neo-Nazis marching in Charlottesville or cowardly racists scrawling “White Pride” on the side of a unique message board on the campus of the University of Tennessee in Knoxville.

A 97.5-ton wedge of dolomite unearthed in the mid-1960s during a campus expansion, “The Rock” serves as a communal palimpsest for the UT community. People can paint pretty much anything they want on its surface, from cheers and jeers about Volunteers football coaches to patriotic displays, marriage proposals, messages to Mom, and, at least once, a reproduction of Vincent van Gogh’s Starry Night.

But as the Knoxville News Sentinel reported on December 15, students recently complained to the university’s administration after the words “White Pride” appeared, spray-painted in large letters on the side of the boulder.

Despite what some scumbags might claim, “White Pride” is a slogan that’s used almost exclusively by white supremacists, white nationalists, and others of their ilk. It’s their twisted take on the phrase “Black Pride” — as if changing one word could obliterate centuries of slavery and segregation.

Racist skinheads use variations of White Pride on T-shirts and signs during demonstrations. And the phrase “White Pride Worldwide” is the motto of the white supremacist message board Stormfront.org, which is run by former Ku Klux Klan grand wizard Don Black.

So it’s no surprise that UT students would object to it. They were soon tweeting out images of the Rock emblazoned with the offensive message, demanding that the university respond.

“Hi McKinley, While we sometimes disagree with what appears on the Rock, those who paint it are protected by the First Amendment. We trust that the Volunteer community will take care of this quickly,” it stated.

After an avalanche of online criticism,  the university deleted the tweet, telling the News Sentinel in a statement that “we felt like it didn’t convey our position about racism.”

Why is it that UT has staff sent over to paint over negative messages about the athletics department, but won’t paint over messages that empower racism? Hmm?

The statement went on to say there is “no place at the University of Tennessee for racism, bigotry and prejudice.”

Students lambasted the university on Twitter and Facebook for not taking a stronger stand against “hate speech.”

Claimed one: “Why is it that UT has staff sent over to paint over negative messages about the athletics department, but won’t paint over messages that empower racism? Hmm?”

Front Page Confidential  reached out to the UT communications office seeking comment but has yet to receive a reply.

WATE-TV in Knoxville reported that someone had painted over “White Pride” by the following day. The racist message was supplanted by “Happy Holidays,” painted in the school’s colors, orange and white.

The university issued a statement to the station, saying that the Rock “is considered a venue of free speech and is typically self-policed by the campus community,” adding that the school has “no written policy” regarding the boulder.

The university also said its policies on bias and free speech would apply to the Rock.

The university’s website does have a “frequently asked questions” page entitled, “Bias Education and Response.” One question asks how the university handles situations where free speech conflicts with rules against biased behavior.

The answer leaves little in the way of wiggle room:

“In responding to reports of bias, UT will not violate the First Amendment rights of students, faculty, or staff. Even when an incident of bias occurs, disciplinary or corrective action may not be taken toward the offender if it is determined that the act of bias was a protected exercise of their freedom of expression.”

Even absent such a policy, First Amendment jurisprudence limits the university’s options. A public university, like a government, may regulate speech for reasonable “time, place, and manner,” but not for content, except in the rarest of cases.

It’s the same principle that allows odious white nationalists (we’re looking at you, Richard Spencer) to speak on the campuses of public colleges and universities.

WATE-TV contacted Akram Faizer, a professor at Lincoln Memorial University’s Duncan School of Law, and asked him to weigh in on the Rock.

Meaning that as long as the Rock remains a free-speech icon, it likely must endure the occasional racist remark.

At least for as long as it takes a righteous campus community to paint over it. 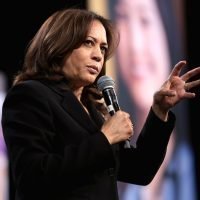 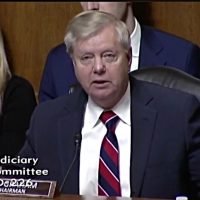