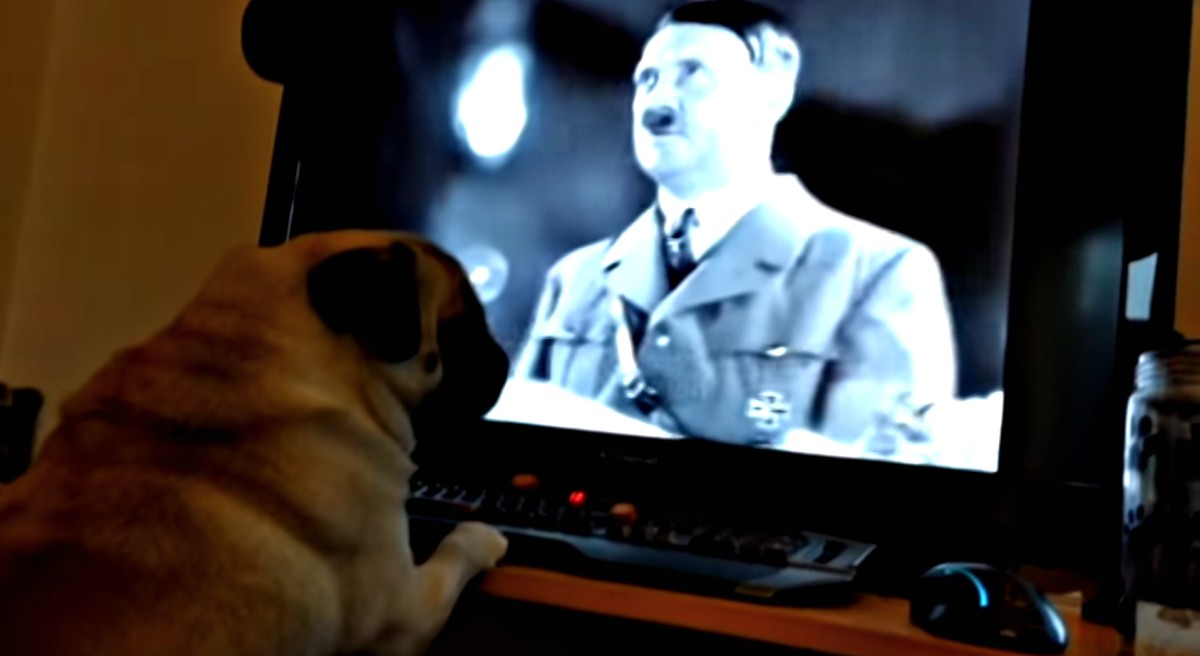 If you’ve ever wondered what the United States would look like if we forswore the First Amendment and made politically correct speech codes the law of the land, look no further than the United Kingdom, where tweeting a bad joke or uploading an obnoxious video to YouTube can net you six months in the slammer for committing a hate crime.

A maximum of six months is what 30-year-old Scottish YouTuber Mark Meechan faces when his sentence is handed down next month. On March 20, a British court found Meechan guilty of a hate crime for publishing a video of his girlfriend’s pet pug, Buddha, performing a Hitler salute whenever Meechan says, “Sieg heil.”

Meechan, a.k.a. Count Dankula, also taught Buddha to react excitedly to the phrase “Gas the Jews,” and his video depicts the pooch doing so over and over again. We also see Buddha staring at a computer monitor that shows Adolf Hitler ranting at a Nazi party rally in Leni Riefenstahl’s infamous propaganda film Triumph of the Will.

At the beginning of “M8 Yer Dugs A Nazi,” which Meechan posted to YouTube on April 11, 2016, he explains that his girlfriend “is always ranting and raving about how cute and adorable her wee dog is,” so he decided to train Buddha to be “the least cute thing I could think of, which is a Nazi.”

This sort of thing wouldn’t merit a raised eyebrow from cops in the Land of the Free and the Home of the Brave, because the U.S. Constitution’s First Amendment prevents the government from making any law that abridges freedom of speech. But no such prohibition applies in Great Britain, where the populace enjoys a form of free speech that includes plenty of exceptions.

Which explains why plainclothes police officers promptly arrested Meechan and hauled him off to the hoosegow.

Yup that's me. You're probably wondering how I ended up in this situation.. pic.twitter.com/fdyxTLi5hN

Specifically, Meechan, who labels himself “Professional Shitposter” in his Twitter bio, was accused of violating Section 127 of Britain’s 2003 Communications Act, which makes it illegal to transmit “by means of a public electronic communications network a message or other matter that is grossly offensive or of an indecent, obscene or menacing character.”

Released a day later on his own recognizance, Meechan returned home to find himself a cause célèbre, especially among alt-righters. On an installment of conspiracy enthusiast Alex Jones’s Infowars show, the host kiddingly called the bearded, heavily tatted Scotsman “our thought-criminal friend” and tried to get Meechan, who appeared via Skype, holding Buddha on his lap, to have the pooch reprise the fascist greeting.

Concerned about further charges, Meechan declined, and Jones noted the chilling effect on free speech. The Scotsman said he hadn’t meant to upset anyone, and that the video was merely an attempt at humor, which should not be the target of criminal prosecution.

“I don’t think that hurting someone’s feelings is a crime,” Meechan ventured. “It’s not a crime in any sense.”

Explaining that he hadn’t been trying to foment “hatred of the Jews,” he said he found it ironic in the extreme that “all the arrest did was draw more attention to the video itself.”

True: The video went viral and reportedly has been viewed more than 3 million times — yet another example of the “Streisand effect,” wherein an attempt to censor an image or a video only causes it to be more widely disseminated.

Surprisingly, in this age of knee-jerk de-platforming, YouTube has not yanked the Hitler pug video (yet). Instead, the site inserted an all-caps warning that a viewer must click past — “The following content has been identified by the YouTube community as inappropriate or offensive to some audiences” — and made it so one can’t share it or see how many times it has been viewed. (Earlier this year, a Meechan supporter posted a “mirror” of the video with the now-trending hashtag #FreeDankula.)

“Everything that’s happened to me is something that’s straight out of 1984,” Meechan told Jones. “I made a joke, and, you know, I was immediately arrested…. It’s just wrong.”

Sheriff Derek O’Carroll of North Lanarkshire saw things differently when Meechan’s case came to Airdrie Sheriff Court two years after the offense. (Under Scotland’s legal system, sheriffs function as low-level judges akin to magistrates or justices of the peace in the United States.)

According to the Daily Record, O’Carroll was not amused by Meechan’s shtick.

“The accused knew the material was offensive and knew why it was offensive,” O’Carroll said in court, according to the Scottish tabloid. “Despite that, the accused made a video containing anti-Semitic content and he would have known it was grossly offensive to many Jewish people.”

Some, but not all. Jewish comedian David Baddiel came to Count Dankula’s defense during an appearance on fellow funnyman Ricky Gervais’s show on Sirius XM, characterizing the Hitler pug video as “funny.”  Baddiel said he disagreed with the premise that there are some subjects that should be off limits to humor.

“As far as I’m concerned, you can do jokes about the Holocaust,” he said.

“You can do jokes about anything,” Gervais agreed.

Also there are LOADS of fucking proper anti-Semites out there, seriously promoting Holocaust Denial and global conspiracy bollocks and blood libels and other cunting very very dangerous nonsense. They aren't being arrested. Presumably because they don't do it with pugs.

Meechan’s video is by no means the first instance of someone “taking the piss” out of Nazis, as the Brits might say.

Comedic genius Mel Brooks famously parodied the Third Reich in his 1967 film The Producers, in which characters played by Zero Mostel and Gene Wilder create a Broadway musical titled Springtime for Hitler: A Gay Romp With Adolf and Eva at Berchtesgaden, which they hope will flop so they can keep the money they raise to put on the show. The fictional musical features half-naked Valkyries, capering SS personnel who form a human swastika onstage à la Busby Berkeley, and an Adolf Hitler (played to the hilt by actor Dick Shawn) who talks like a hippie and sings scat like Ella Fitzgerald.

In response to Meechan’s predicament, more than one wag has suggested on Twitter that Britain issue an arrest warrant for Brooks. (Notably, the late Wilder, Mostel, and Shawn were Jewish, as is Brooks.)

Beyond The Producers, there are tons of Nazi-inspired satires and comedies that might be considered verboten under the U.K.’s Section 127 — from John Cleese’s memorable Hitler impersonations on Monty Python’s Flying Circus to the 1960s sitcom Hogan’s Heroes, which was set in a POW camp and featured bumbling Nazi caricatures, to Spike Jones’s classic version of the 1942 parody song, “Der Fuehrer’s Face.”

Nor has anti-Semitism been off-limits to comedians. In the 2006 mockumentary Borat , for example, the title character — played by the film’s writer/producer Sacha Baron Cohen, who was raised Jewish — is given to making crude anti-Semitic statements; the film features an infamous scene that supposedly takes place in Borat’s hometown in the Central Asian country of Kazakhstan, depicting a local custom called “The Running of the Jew.”

.@Glinner's point is that the YouTubing alt-right are schooled in irony. They know to use comedy as a cover, as this instruction manual suggests. I have no idea at all if this is true of Count Dankula himself, who's right to do that joke I have supported. But it's interesting. pic.twitter.com/mdnzPxdjbO

Of course, the alt-right movement in general has been ingenious at using dark humor, satire, and funny memes to expand what’s known as the “Overton window” — a term used to describe the range of acceptable public discourse.

Meechan has denied alt-right affiliation and insisted he’s not a bigot. But he has welcomed the support of right-wing English activist Tommy Robinson, and on his own video channel he explores (and sometimes mocks) themes near and dear to alt-righters — including diversity quotas, binary gender labels, feminist criticism of gaming culture, and the notion of “white genocide.” More recently, Meechan has taken a somewhat adversarial tone toward the alt-right in his tweets, saying that he regards race as irrelevant, is not anti-Semitic, and doesn’t believe in a white ethnostate.

Yet he has been unafraid to tell inappropriate jokes. In one video, titled “I Hate Buzzfeed,” in reference to the Islamic State of Iraq and Syria, he cracks: “[if] there’s one thing that ISIS have taught us, is that gays can’t fly…. At least terrorists are contributing to science.”

One doesn’t have to agree with Meechan’s worldview or find his jokes amusing to recognize the danger inherent in Section 127 and the spirit that guides it. The idea of prosecuting a person for a hate crime based on the content of a joke ought to be anathema to a free society.

Meechan’s case, though, is not an outlier. A 2012 Guardian article detailed other questionable prosecutions in the U.K. based on a judge’s view of what’s offensive under the law.

In that light, Meechan’s comments to the press following his conviction seem particularly meaningful.

“For any comedians in Britain, I’d be very worried about making jokes in the future,” he said. “Because the context and the intent behind them apparently don’t matter anymore.”