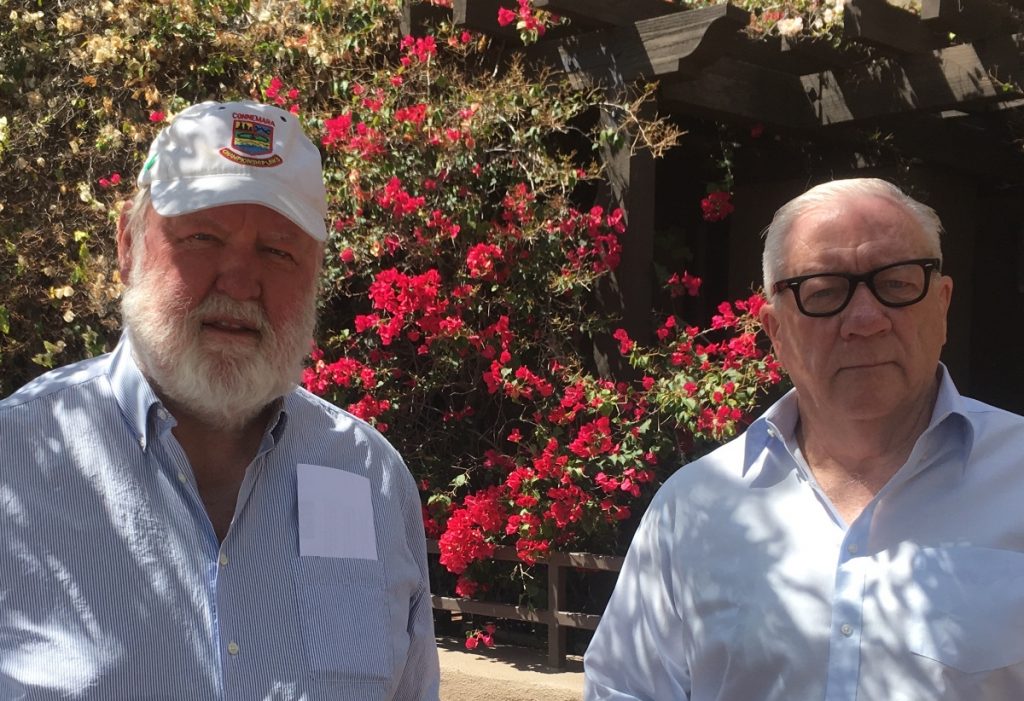 On April 6, 2018, the U.S. government set a disturbing precedent in the annals of modern censorship by arresting award-winning newspapermen Michael Lacey and Jim Larkin and taking down Backpage.com, a classified ads site that reportedly served almost 1,000 cities worldwide.

Four years and one mistrial later, the former alt-weekly titans and ex-Backpage owners, both in their 70s, still face spending the remainder of their lives in prison for the supposed crime of once owning an interactive website that largely mirrored Craigslist.com, allowing users to post ads for everything from car sales and apartment rentals to ads for escorts, dating and massage.

Those latter categories are what self-serving politicians and prudish non-profit leaders objected to, accusing the site of promoting prostitution and/or sex trafficking. The first involves consensual commercial sex among adults; the second concerns either minors in the sex trade or adults involved in it via force, fraud or coercion.

The reality is, Backpage forbade illicit transactions and relentlessly moderated the site. For example, according to court documents, in April 2012 Backpage blocked or removed over 1 million ads from the 3.3 million posted that month, reporting 400 suspicious listings to the National Center for Missing and Exploited Children (NCMEC.)

Backpage, which Lacey and Larkin owned from 2004 to 2015, worked closely with law enforcement, answering subpoenas within 24 hours, a better record than Facebook or Twitter can claim.

“We’re being arrested for raising hell. It’s sort of a tradition journalism has.” — Michael Lacey, after being released in 2007 from Sheriff Joe Arpaio’s Fourth Avenue Jail

Backpage helped law enforcement track down endangered children and adults, winning plaudits from police agencies, including the FBI. In 2011, FBI director Robert Mueller awarded Backpage’s CEO with a certificate for “outstanding cooperation and assistance in connection with an investigation of great importance.”

So was the FBI in cahoots with sex traffickers? Hardly.

Over the years, federal, appellate and state courts consistently found that the ambiguous language and occasionally titillating photos posted by Backpage’s users was 100-percent legal, shielded by the First Amendment and Section 230 of the Communications Decency Act.

Federal courts in three states — Washington, Tennessee and New Jersey — overturned as unconstitutional state criminal laws targeting Backpage. And in his 2015 decision in Doe. v. Backpage, U.S. District Court Judge Richard G. Stearns ruled, “The existence  of an escorts section in a classified ad service, whatever its social merits, is not illegal.”

That same year, in Backpage v. Dart, Seventh Circuit Appeals Court Judge Richard Posner spelled out the legality of the ads in Backpage like no judge before, writing,

Nor is Sheriff Dart on solid ground in suggesting that everything in the adult section of Backpage’s website is criminal, violent, or exploitive. Fetishism? Phone sex? Performances by striptease artists? (Vulgar is not violent.) One ad in the category “dom & fetish” is for the services of a “professional dominatrix”—a woman who is paid to whip or otherwise humiliate a customer in order to arouse him sexually . . . It’s not obvious that such conduct endangers women or children or violates any laws, including laws against prostitution.

Reporting in Reason and Wired magazines later revealed that the government was fully aware such ads are protected speech. Indeed, one of the prosecution’s star witnesses in last year’s disastrous trial of Lacey and Larkin made this abundantly clear.

Brian Fichtner, a special agent with the California Department of Justice, initially told the jury that the scores of ads he reviewed on Backpage in 2015 were obviously for prostitution.

But on cross-examination, Fichtner flailed. He admitted the language in the ads was legal and the ads themselves could be for lawful adult services in California, including live sex shows. Nor could he make a prostitution arrest based solely on one of those ads, Fichtner explained.

Game, set and match? Sadly, no.

And as Fichtner testified, the language in the disputed ads was, on its face, legal, an admission that essentially gutted the prosecution’s case. That’s one reason government attorneys were forced to rely on “the Big Lie,” i.e., the smear that Lacey, Larkin and their four co-defendants were somehow involved in child sex trafficking.

As federal Judge Susan Brnovich pointed out when she declared a mistrial on Sep. 14, 2021, eight days into a trial expected to last three months, veteran prosecutor Reggie Jones’ “opening statement . . . was close to causing a mistrial” by itself.

At sidebar and in her rulings, Brnovich warned the prosecution not to double-down on these inflammatory accusations, but prosecutors such as Jones and his colleague Kevin Rapp persisted, eliciting testimony about underage sex trafficking, detail about the day in the life of a trafficking victim and even rape.

Brnovich eventually granted the defense’s request for a mistrial, saying that “the cumulative effect” of the prosecution’s prejudicial actions “is something that I can’t overlook and won’t overlook.”

Subsequently, without explanation, Brnovich recused herself from the case, with federal Judge Diane Humetewa taking over. Humetewa denied a defense motion to dismiss the case for double jeopardy, and the case remains on hold while an appeal of Humetewa’s decision is before the Ninth Circuit.

The government, of course, is not giving up. And Lacey and Larkin remain unbowed, despite the fact the government has seized nearly all of their assets. These include assets that have nothing to do with Backpage and derive from their 40-plus years as the founders of a wildly successful chain of alternative weeklies, once known as Village Voice Media.

Government apparatchiks like Jones and Rapp need not worry about their salaries as long as Uncle Sam keeps printing money. Lacey and Larkin, however, are responsible for their own legal bills, and those bills keep coming, with a vengeance, regardless of a mistrial.

By now, the government’s assault on Lacey and Larkin is beginning to resemble Putin’s invasion of Ukraine.

There’s a saying: The tall nail gets hammered. From the founding in 1970 of their first paper, the Phoenix New Times, Lacey and Larkin’s newspapers defied authority, incessantly questioning the motivations of rogue politicians and police.

It’s an attitude that often got them in Dutch with the cops, most famously in 2007, when both men were arrested by then-Maricopa County Sheriff Joe Arpaio for revealing a rigged grand jury that Arpaio’s allies in the County Attorney’s Office set up to railroad them.

I was present, as a reporter for the New Times, when Lacey was released in the early morning from Fourth Avenue Jail in Downtown Phoenix, as journalists gathered ’round him.

As he put on his belt, one scribe asked him why he and Larkin had been nabbed in the middle of the night for an alleged misdemeanor by plainclothes detectives in unmarked cars with Mexican plates. Lacrey replied that they’d been collared for “raising hell.” He added, “It’s sort of a tradition journalism has.”

Lacey and Larkin won that fight, sued the County for false arrest and won a $3.75 million settlement, which they donated — all of it — to various Latino and immigrant civil rights groups. In other words, they gave it to the very people targeted by Arpaio’s racist regime.

Adult advertising of the sort that appeared in Backpage had always been legal and was found (and sometimes still is) in the back of alternative weeklies throughout the United States. When I lived in New York, long before Lacey and Larkin came to own the Village Voice, I remember the paper being thicker than a brick with such advertising.

The Yellow Pages had these ads, as did a number of dailies, including The Washington Post.

After state Attorneys General successfully pressured Craigslist to censor its “adult services” section in 2010 (note: these ads migrated to the site’s personals section), the same forces began to threaten Backpage into following suit.

But Lacey and Larkin are not the kneeling kind, especially when the courts were telling them their business was legit. They refused to shutter Backpage, and their papers published a series on the myths and lies surrounding sex trafficking, further infuriating powerful groups whose revenue stream depended on an endless grift.

The two men also made blood-enemies of Sen. John McCain and his wife Cindy by exposing the Senator’s corruption, as well as the truth behind Cindy’s mass-theft of opioids to feed her addiction and the fact that the beer baroness’ fortune hailed from her mob-connected pop.

As a result, the McCains made Backpage their bête noire, tirelessly campaigning for the government to take down Backpage and prosecute Lacey and Larkin. In 2018, a federal prosecutor beholden to the Senator brought a grand jury indictment, resulting in the FBI raiding Lacey and Larkin’s homes at gunpoint and seizing everything of value.

Lacey was arrested at his house in front of his loved ones, who’d gathered there on the eve of a reception for his recent wedding. His 80-year-old mother-in-law was surprised at gunpoint by an FBI agent as she showered. Lacey was hauled off in handcuffs to federal prison, where he was held in solitary confinement, supposedly for his safety, since the media was reporting — wrongly — that he and Larkin faced allegations of sex trafficking.

Larkin was taken into custody on the tarmac of Sky Harbor International Airport, returning home from a trip with his son.

Knowing about the grand jury, Lacey and Larkin’s attorneys had offered to turn them in if indicted.  The feds refused, choosing a costly dog-and-pony show instead. In the process, they ravaged Lacey’s home, making off with anything of value and wrecking a cabin Lacey had up in Sedona.

About a week later, Lacey and Larkin bailed out on bonds of $1 million apiece. They must wear ankle monitors and are forbidden to leave Maricopa County without permission. This, though pretrial services recommended that they be released on their own recognizance.

What explains such viciousness, including the feds’ attendant misdeeds: like, the destruction of evidence, the invasion of attorney-client privilege and the suppression of exculpatory material?

The feds want to make an example of them. This is what happens to those who do not bend the knee. Paying attention, Facebook, Twitter, Google, et al.?

It’s a message Lacey and Larkin refuse to accept.

As Lacey said in a 2019 documentary by Reason magazine,

“It would give the lie to our entire lives, our entire career of being journalists, if the government could come in and put their stubby little fingers in our chest and make us ask for our mommy. 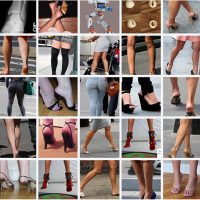