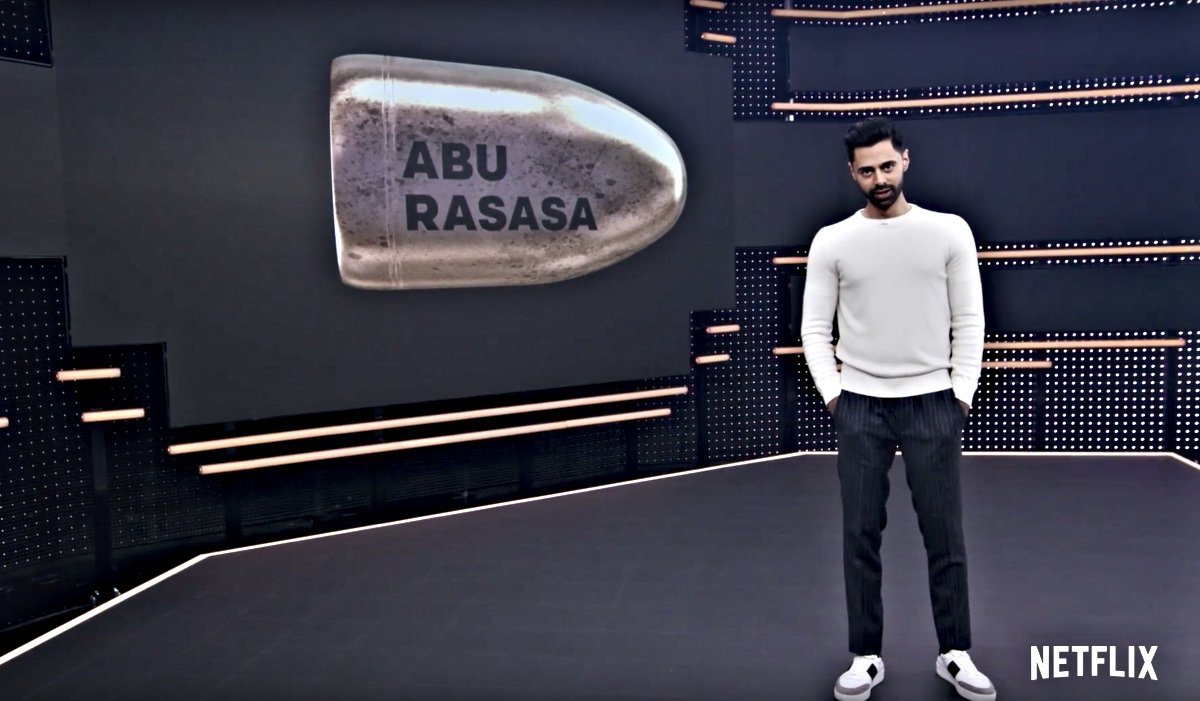 A screenshot the Saudi Arabia episode of comedian Hasan Minhaj's Netflix show Patriot Act with Hasan Minhaj, in which he explains Saudi Crown Prince Mohammad bin Salman's nickname, Abu Rasasa, which translates as "Father of the Bullet" (screenshot via YouTube)

Saudi Arabia's government was not amused by a recent episode of the comedy series Patriot Act with Hasan Minhaj, so Netflix stopped streaming the show to the desert kingdom

No one ever accused Saudi Arabia’s ruthless rulers of possessing a sense of humor. So it should arch nary an eyebrow that they object to an episode of the comedy series Patriot Act with Hasan Minhaj that’s critical of the kingdom’s notorious young crown prince, Mohammad bin Salman (a.k.a. MBS).

What is raising hackles instead: news that Netflix complied with a request from Saudi officials and censored the episode, preventing it from streaming in the country. (According to various news reports, people in Saudi Arabia are still able to access the episode via the show’s YouTube channel.)

In a statement quoted in a New York Times story, Netflix rationalized kowtowing to the kingdom:

“We strongly support artistic freedom worldwide and only removed this episode in Saudi Arabia after we had received a valid legal request — and to comply with local law.”

A Netflix spokesman told CNN that the company’s action “doesn’t mean we agree with these laws.” Still, the move drew condemnation across social media, as well as from groups such as Human Rights Watch and Amnesty International. The latter noted in a press release that Saudi Arabia uses its cybercrime laws to “silence dissidents” and create an “environment of fear.” In acquiescing to the Saudis, Amnesty International asserted, Netflix is “in danger of facilitating the Kingdom’s zero-tolerance policy on freedom of expression.”

To be fair to Netflix, the biggest facilitator of Saudi Arabia’s transgressions is the United States of America.

And it is that troubling alliance that Minhaj, a 33-year-old Californian of Indian-Muslim descent and a former correspondent forThe Daily Show, details in the offending eighteen-and a-half-minute segment.

Suspects in the killing of journalist Jamal Khashoggi have reportedly attended their first court hearing. Prosecutors plan to seek the death penalty for five suspects. https://t.co/oqjTuRj9S3

Minhaj skewers MBS, but he also mocks America’s mainstream news media, and the U.S. public at large, for playing sucker to the Saudi prince’s 2018 “charm tour” of the U.S., only to be disabused by the October 2, 2018, slaying of Washington Post journalist and Saudi critic Jamal Khashoggi.

A fifteen-man Saudi hit squad is alleged to have murdered Khashoggi inside Saudi Arabia’s consulate in Istanbul, Turkey, where he’d been lured to procure documents necessary for his impending marriage. A CIA report tabbed MBS as having ordered the assassination. Though Saudi Arabia has denied the crown prince’s involvement, the government has put eleven people on trial for what it has labeled a “rogue” effort on the part of the nation’s security forces. Five of the defendants face the death penalty.

“It blows my mind that it took the killing of a Washington Post journalist for everyone to go, ‘Oh, I guess [MBS is] really not a reformer,’ ” Minhaj cracks at one point during the segment. “Meanwhile, every Muslim person you know was like, ‘Yeah, no shit, he’s the crown prince of Saudi Arabia.”

Minhaj goes on to deliver a thumbnail history of Saudi Arabia, its wealth, and its importance to Muslims worldwide as the home of Islam’s holiest cities, Mecca and Medina: all reasons the United States has maintained a strategic partnership with the Saudis since the time of FDR.

True, President Trump has drawn the ire of Democrats for saying that punishing Saudi Arabia for Khashoggi’s death would imperil massive arms deals with the Saudis. But the special relationship between the two nations predates Trump’s presidency and has been rubber-stamped by every administration, Democrat and Republican, for more than 70 years.

“Whether it’s for oil or arms deals, we have always played it cool with the Saudis no matter what they do,” Minhaj explains, as the graphics behind him shift to show photos of the 9/11 hijackers, fifteen of whom were Saudi nationals.

“Remember, America hates terrorists,” Minhaj continues. “Saudi Arabia gave them passports. Saudi Arabia was basically the boy-band manager of 9/11. They didn’t write the songs, but they helped get the group together.”

Minhaj describes a Wall Street Journal report of a conversation between MBS and Jared Kushner, Trump’s son-in-law and a senior advisor to the president, wherein MBS asked, “Why the outrage?”

The comic finds MBS’s surprise to be “completely understandable” given that the Saudi royal has been getting away with “autocratic shit” in his own country for years. Said shit includes arresting hundreds of rivals and critics of the ruling Saudi family, allegedly coercing his predecessor as crown prince to abdicate, and placing his own mother under house arrest.

Repression, torture, and executions are all up in Saudi Arabia under MBS, whom the Saudis have nicknamed “Abu Rasasa,” which translates as “Father of the Bullet.”

Ultimately, Minhaj concludes, the only thing MBS is modernizing is “Saudi dictatorship.”

But U.S. society is beholden to the Saudis, the comedian reminds us, not just because of their oil and their purchases of U.S. military equipment, but also because the Saudis sink loads of cash into American businesses: $11 billion invested in tech startups, $3.5 billion in Uber alone.

In response to Netflix’s decision, Minhaj offered a sly dig at the Saudis in a January 2 tweet:

“Clearly, the best way to stop people from watching something is to ban it, make it trend online, and then leave it up on YouTube.”

Clearly, the best way to stop people from watching something is to ban it, make it trend online, and then leave it up on YouTube.

In the same tweet, he urged people to help alleviate the humanitarian crisis in Yemen — caused in large part by the Saudi-led coalition’s horrific bombing campaign —  by linking to the webpage of the International Rescue Committee, a nonprofit dedicated to assisting refugees.

In an interview with The Atlantic  that was published in early December of 2018, Minhaj admitted that the Saudi Arabia episode had “instilled in him a fear of death,” made worse by the fact that he’s a married father of a newborn girl.

He acknowledged that the episode likely will affect his duty as a Muslim to travel to Mecca as part of the hajj (a religious pilgrimage all adherents to Islam are required to make once in their lifetime). He believes Saudi bots are following his Instagram account.

“There was a lot of discussion in my family about not doing [the episode],” Minhaj said. “I’ve just come to personal and spiritual terms with what the repercussions are.”

For Further Reading:
“Meghan McCain Slams Trump for Sticking with Saudi Arabia, but Her Dad Was a Saudi Stooge” 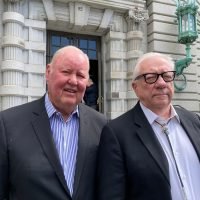