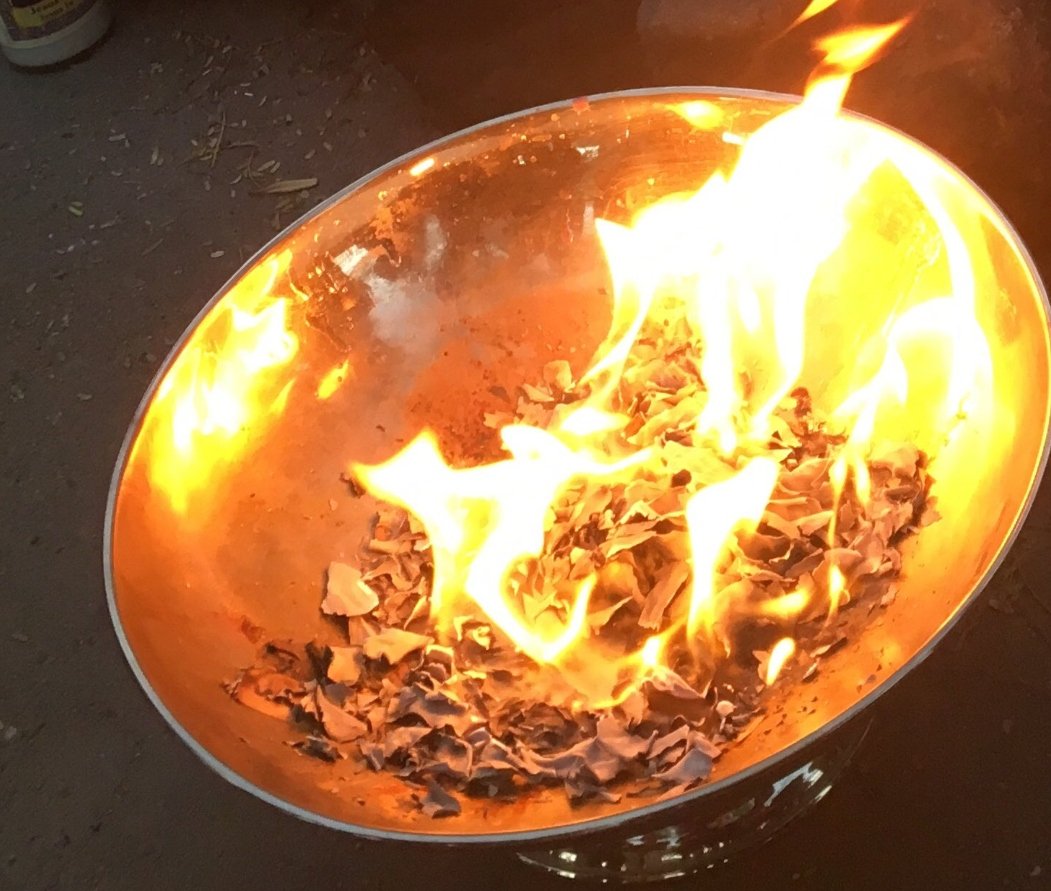 The names of the dead are burned to "transform their pain into peace." (photo courtesy of Juliana Piccillo with SWOP-Tucson)

More than a year after FOSTA/SESTA, sex workers and their allies read the names of their fallen comrades at Tucson's El Tiradito shrine in the city's Barrio Viejo.

On the same day members of Congress proposed legislation to study the effects of FOSTA/SESTA, the 2018 law that outlawed adult ads online and placed sex workers in harm’s way, around 30 sex workers, activists and allies assembled at a shrine for the lost in Tucson’s old barrio, to read the names of their fallen comrades and draw strength from each other.

Tucson’s El Tiradito, Spanish for “The Castaway,” is an open-air dirt lot, partially enclosed by a brick wall, at 418 S. Main Ave. The dusty shrine honors a slain man buried in unconsecrated ground in the late 1800s, the long-ago victim of a jealous husband. People leave offerings at a plaster niche in the center of the wall, light candles and hide scraps of paper inscribed with their hopes and dreams, giving the location its other name, “the Wishing Place.”

At the shrine, Tucson filmmaker Juliana Piccillo, an organizer with SWOP-Tucson, hands out strips of paper with the names of sex workers taken by murder, suicide and overdose written on them. A circle is formed, and the names are read aloud, with the group repeating the deceased’s first name, then chanting in unison, “We remember you.”

There are about fifty names, mostly women, and a couple of men, from disparate parts of the country, everywhere from Anchorage, Alaska to Tallahassee, Florida.

Raquel, a young trans woman, tells the group that they are survivors and that they each need to love one another in order to overcome our grief. Cris Sardina, executive director of the sex workers’ rights collective Desiree Alliance, echoes Raquel’s message, reminding attendees that next year, their names could be among those mourned.

A Native American woman closes out the ceremony, singing a haunting song in an indigenous language, then Piccillo and others burn the names in a steel bowl, the smoke borne away by the wind kicking up around us. She later explains the reason for the immolation.

“We use fire to release the dead and transform their pain into peace and to give renewed strength to the living to continue in the struggle,” she says.

December 17 is “the most important day of the year for the sex worker rights movement,” Piccillo tells me. I ask her how things are different this year from 2018, when the passage of FOSTA/SESTA caused many interactive websites to exclude the mere talk of sex, or go dark, out of fear that federal law enforcement could come after them, much like the FBI did when it closed down the online classifieds giant Backpage.com just days before FOSTA/SESTA was signed.

For Piccillo, the message is clear: it’s open season on sex workers, more than ever before.

“It used to be the war against sex workers was usually isolated skirmishes,” she says. “It’s an all-out assault from all angles on sex workers right now.”

Sex workers face more danger, she contends, both from law enforcement and from sketchy clients, whom sex workers can no longer easily screen online.

“It’s so complicated and risky,” she tells me as dusk closes in on us. “There’s no medium to announce our presence other than Twitter. And mainstream outlets are cracking down all of the time.”

Isabel mentions that Instagram recently deleted the account of a sex worker friend of hers. And Twitter has once again changed its terms of service, which may signal further censorship to come. It’s not just sex workers who should be concerned, she says. Anyone who cares about freedom of communication online and the right to privacy should be worried about the fallout from FOSTA/SESTA.

“Just like with any pseudo fascist or fascist movement, they start with the most vulnerable and work their way up,” Isabel observes.

Sardina chimes in, referring to FOSTA/SESTA as the “technical Patriot Act,” with the U.S. “playing Robocop and going after the entirety of the World Wide Web.” Indeed, Facebook may be next on the chopping block, as the Justice Department continues to pressure Mark Zuckerberg to create a digital “backdoor” for any planned encryption.

It’s almost dark and the group decamps to the appropriately-named Red Light Lounge, a bar located a few blocks away at a revamped, mid-century-modern-themed hotel called The Downtown Clifton. Sex workers and their cohorts descend on the venue for a free buffet and a cash bar featuring the drink of the evening, La Maison Derriere, a ruby-red concoction of tequila, Campari and champagne.

The mood turns chatty and a bit festive as libations are consumed. There’s a general consensus that the Safe Sex Workers Study Act, the proposed legislation announced that day on Capitol Hill, sounds promising. If passed, it would call on the National Institute of Health to study how FOSTA/SESTA has impacted sex workers.

Still, sex workers already know and continue to feel FOSTA/SESTA’s sting. The Electronic Frontier Foundation recently reported that a survey of sex workers from a the grassroots group Hustling//Hacking found that 40 percent of respondents said they experienced increased violence after FOSTA/SESTA became law. And 99 percent said the law didn’t make them feel safer.

So while Congress readies a remedial studies course for itself on FOSTA/SESTA, sex workers are well aware of what they need to feel safer: decriminalization, the complete repeal of all laws against sex work.

At the bar, Raquel, an aspiring writer, schools me on what should be obvious, that violence against sex work is the direct result of criminalization. And it’s not just people who are brutalized or murdered, but friends of hers who have been taken away by the police and placed in a penal system that menaces life and limb.

“That absence in your life is still very real,” she says over a beer. “That’s very real violence against sex workers.”

Sex workers have to organize their whole lives around being afraid of the police and operating in secrecy, she tells me, isolating themselves from the rest of society, making them less able to look out for one another.

“All of that is made possible by criminalization,” she observes.

“That’s our biggest obstacle,” she adds. “Step number one for anyone who really wants to help us is, get the police out of our lives.”