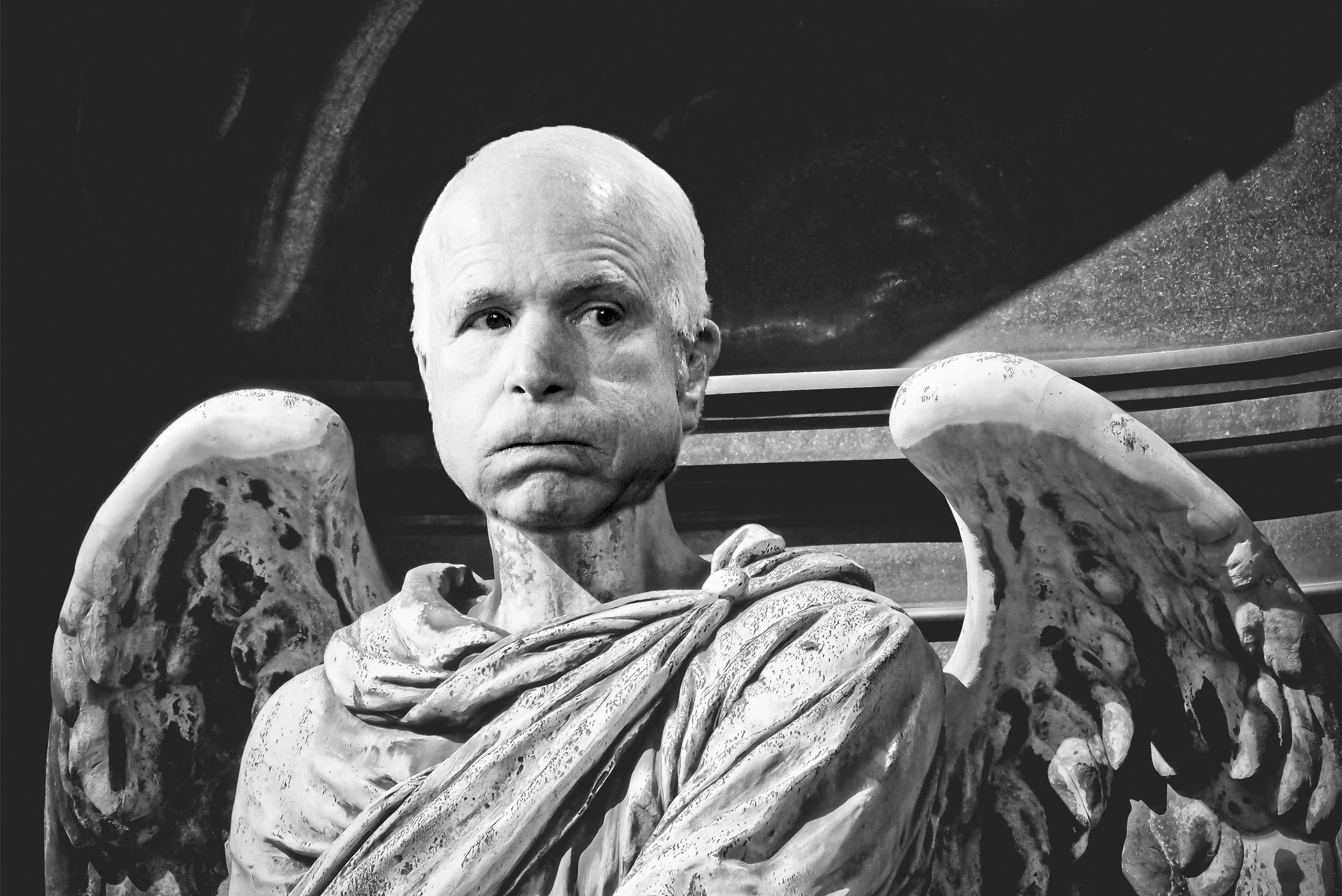 The Fourth Estate and the liberal elite in this country have yet to demand that John McCain’s grimacing mug be blasted into the side of Mount Rushmore. But give them time.

Meanwhile, in response to negative comments uttered recently about the ailing senior senator from Arizona, who has been on an extended leave from D.C. since mid-December as he battles brain cancer, the punditocracy has declared an 11th Commandment for U.S. politics: Thou shalt not take John McCain’s name in vain.

At least not without some punishment.

In fact, it seems everyone from CNN’s Jake Tapper to McCain’s daughter and The View cohost Meghan McCain wants to see White House staffer Kelly Sandler prostrate herself and beg forgiveness for the grievous sin of disrespecting McCain in an offhand comment uttered at a closed-door White House meeting, in reference to McCain’s opposition to President Trump’s nominee for CIA director, Gina Haspel.

In 2002, Haspel oversaw a secret CIA “black site” in Thailand where detainees were tortured, sometimes with waterboarding. During her recent testimony in front of the U.S. Senate Intelligence Committee, Haspel declined to acknowledge that the torture the U.S. government engaged in post-9/11 was “immoral.”

McCain, who was tortured during the five-plus years he spent as a POW in Hanoi during the Vietnam War, and who has made a show of opposing so-called enhanced interrogation techniques as a U.S. senator, cited Haspel’s testimony as reason enough to disqualify her for the position, making his opposition known in a May 9 tweet.

Don’t Miss!
“The Stains of John McCain: Remember John McCain as a Warmonger and a Cunning Opportunist and Leave the Hero-Worship to His Lackeys“

Considering McCain’s indefinite and perhaps permanent absence from D.C., his antagonism toward the Haspel nomination carries limited weight. It should be no surprise that members of the Trump administration have expressed as much in internal meetings.

I believe Gina Haspel is a patriot who loves our country & has devoted her professional life to its service & defense. However, her role in overseeing the use of torture is disturbing & her refusal to acknowledge torture’s immorality is disqualifying. https://t.co/ocDtdqU2Sx

Nevertheless, the outrage avalanche kicked off May 10, when The Hill revealed that according to its sources, White House communications aide Kelly Sadler had said of McCain’s opposition to Haspel, during one such closed door meeting:

“The fact is John McCain — it worked on John,” McInerney told host Charles Payne. “That’s why they call him ‘Songbird John.'”

McInerney, a noted birther who’s infamous for his kooky statements and conspiracy theories, was referring to the physical abuse that McCain, a Navy pilot, endured at the hands of the North Vietnamese after he was shot down over Hanoi in October 1967 during his 23rd bombing mission. McCain broke both arms and a knee while ejecting from his A-4E Skyhawk and parachuted into a lake in central Hanoi.

During his time in captivity, like almost all of his fellow POWs, McCain  was tortured into signing a “confession” to his crimes as an “air pirate” and forced to record a statement later played over Radio Hanoi, in which he expressed gratitude to the Vietnamese people and praised the medical assistance granted him.

The notion that McCain was a “songbird” while a POW is largely a myth concocted by McCain’s critics on the far right and those enraged by his stance in the 1980s and 1990s that there were no live POWs left in Vietnam after the U.S. withdrawal from the South. However, as McCain notes in his 1999 memoir Faith of My Fathers, the fact that his dad, John S. McCain, Jr., was a high-ranking admiral and was to become commander-in-chief of all U.S. forces in the Pacific, did assist him in weathering the hardships of imprisonment.

McCain famously refused an offer of an early return home (as did other POWs) and was tortured for his defiance. Because of the poor medical care he received, McCain’s wounds never fully healed and to this day he cannot raise his arms above his head as a result.

The senator’s trials as a POW have become synonymous with his political career, and as a result, the guardians of his reputation — his wife Cindy McCain and his daughter Meghan McCain — were quick to lead the backlash against both McInerney and Sadler.

To Sadler, she tweeted, “May I remind you my husband has a family, 7 children and 5 grandchildren.”

From her perch at The View, Meghan McCain fired back at her father’s detractors, wondering why someone like Sadler would “still have a job.” Responding to McInerney’s comments, she dismissed such folks as “nothingburgers” who will be forgotten by history, while her father’s “legacy is going to be talked about for hundreds and hundreds of years.”

The day McInerney made his comments, Payne publicly apologized, saying the general’s statement did not reflect the views of Fox Business. The Washington Times and other outlets reported that the network had announced McInerney would not be back as a commentator.

I regret I did not catch this remark, as it should have been challenged. As a proud military veteran and son of a Vietnam Vet these words neither reflect my or the network’s feelings about Senator McCain, or his remarkable service and sacrifice to this country.”
Charles V. Payne

Sadler’s head has yet to be presented on a platter, and it doesn’t look as though it will be. In the ensuing eruption of condemnation, Sadler reportedly called Meghan McCain and apologized for her leaked comment and promised a public mea culpa, which never came. White House spokesman Raj Shah has since told reporters that no further apology would be forthcoming from the White House and that the Sadler matter had been addressed “internally.”

Trump himself tweeted a response on May 14, focusing on those who leaked the Sadler quote, blaming the “Fake News Media” for the “massive over exaggeration” of the story, and calling the leakers “cowards and traitors” who will be rooted out.

The so-called leaks coming out of the White House are a massive over exaggeration put out by the Fake News Media in order to make us look as bad as possible. With that being said, leakers are traitors and cowards, and we will find out who they are!

Leaks aside, Sadler’s comment gave Trump’s enemies an opportunity to deride his administration and hold up McCain as a shining example of the civility that once reigned in Washington. Former vice president Joe Biden issued a statement on the controversy, saying that decency in the Trump White House had finally hit “rock bottom.”

From the other end of the Hollywood political spectrum, Barbra Streisand, septuagenarian diva and cloner of dogs, lamented in a tweet that the Trump White House had failed to condemn Sadler’s remarks.

Tweeted Babs: “Every day I say, ‘Trump can’t go any lower’…and every day, he does.”

Perhaps no one was more slavish in his praise of McCain than lefty Washington Post columnist Dana Milbank, who in a fit of impassioned hyperbole dubbed the senator “the greatest single political leader of our time.”

The entire kerfuffle has boosted the cult of McCain to an all-time high, which bodes well for sales of the 81-year-old’s third and likely final memoir, The Restless Wave, due out May 22. An HBO documentary about McCain, For Whom the Bell Tolls, is to be broadcast about a week later.

The current spurt of praise conveniently falls into a familiar meme: the valiant senator vs. the coarse orange tyrant who inhabits 1400 Pennsylvania Avenue. For haters of Trump, the enemy of their enemy is their friend — and who better than an old Republican warhorse to serve as a foil for the foul-mouthed chief executive?

The problem with this recurring trope, as I note at length in my recent ebook, The Stains of John McCain, is that it is extremely disingenuous.

McCain publicly has said and done things far more objectionable than Sadler’s callous remark — from his use of the racial slur “gook” during his 2000 presidential run to his flip-flop on the Confederate flag to his initial opposition to a national holiday honoring Martin Luther King, Jr.

There’s worse, most of which I cover in Stains: McCain’s ceaseless warmongering; his support for the disastrous Vietnam War and the bombing of Cambodia; the Keating Five scandal, when McCain and others took money from S&L swindler Charles Keating, then pressured government officials to lay off the tycoon as he bilked taxpayers for millions; McCain’s cheerleading for the 2003 invasion of Iraq, as he helped to spread the false rumor that Saddam Hussein possessed weapons of mass destruction; his enthusiastic support for a theocratic dictatorship in Saudi Arabia, which suppresses women, tortures detainees into confessions (sound familiar?), and sentences bloggers and dissidents to long prison terms, floggings, and the occasional public beheading.

(In fact, Saudi Arabia so adores McCain that in 2014, the nation’s U.S. embassy donated $1 million to the McCain Institute for International Leadership.)

McCain also tried to help his wife cover up her opioid addiction after she was caught swiping pills from a nonprofit she ran. And he hoisted Sarah Palin onto the national stage as his 2008 running mate. As for torture, McCain has painted himself as steadfastly against the practice, but the reality is, he has played politics with the issue, disappointing many who saw him as bulwark against the CIA’s use of enhanced interrogation techniques.

Off-color jokes? Are you kidding? The ex-Navy man has told more than his share. There was the one about “ugly” Chelsea Clinton, who was in her teens at the time. And the jest about a woman who enjoyed being raped by an ape. These weren’t imparted during closed-door meetings, either; they were told in front of crowds.

McCain’s tenure in public office has been marked by fits of childish temper and obscene invective directed at his colleagues. Once he even got into a shoving match with South Carolina Sen. Strom Thurmond on the floor of the Senate. Thurmond was 92 years old at the time.

Outfit McCain in heavenly robes if you must. Affix his wings and polish his halo if it makes you feel good. But the nature of the man and the history of his deeds on earth remain unchanged.